If we didn’t know I sucked at predictions before, we sure do now. As we headed into Night 2 of The Voice’s Season 15 Knockouts, five singers I’d expected not to make it through had competed… and every last one of them had made it through! Mind you, the coaches had been making some straaange calls Monday. Particularly bewildering was Adam Levine’s insistence on keeping around Tyke James’ lustrous mane — and, unfortunately, Tyke with it! And who could’ve guessed that Katrina Cain would fall apart so disastrously? (Well, I suppose technically, we all could’ve guessed after her Battle went so poorly.) How many more of the contestants that I — and perhaps you, too — imagined would get cut, didn’t get cut Tuesday? Read on… 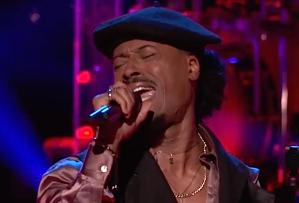 Team Jennifer: Franc West singing “Call Out My Name” (Grade: B) defeated Tyshawn Colquitt singing “Pillowtalk” (Grade: C) | After JHud explained that she’d paired these two because she felt that they both had an old-school vibe, Mariah coached Franc on how to give his Weeknd cover a little Luther Vandross flavor. She then marveled at Tyshawn’s ability to hit nosebleed-high notes but advised him to start a little softer and build up — in other words, make us lean in and then blow us away. On stage, Franc… I can’t say that he slayed, but he was close. (Maimed?) I hadn’t been nuts about him in the Blinds, but I’ve really come around and become a fan of his wild-man vocals. Here, he was passionate but never over the top, and I wondered whether over the top was what it would take for him to outshine Tyshawn. Speaking of whom… when he took his turn at the mic, he kinda blew it. (OK, so Franc didn’t have to go over the top to beat him.) Tyshawn is a helluva performer, but the song was so tuneless, he didn’t really manage to make an impression till he unleashed his falsetto near the end. It seemed to me like he didn’t exactly know where to take the song, and as a result, it kinda went nowhere. 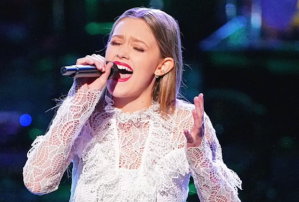 Team Kelly: Abby Cates singing “Because of You” (Grade: B) defeated Claire DeJean singing “There’s Nothing Holdin’ Me Back” (Grade: D-) | In rehearsal, after Mariah kinda adorably gave Claire’s hair a touch-up, Abby got over her nervousness at singing a Kelly song in front of Kelly. At that point, it was sounding a little yelly to me. To her coach and adviser, too, maybe. They advised Abby to give the number a little room to breathe. (Kelly even rearranged the song a bit.) With Claire, Mariah suggested that the teen let the background singers take over for a while so that she could ad lib over them. On stage, Claire demonstrated why Kelly had been so on her to breathe, breathe, breathe — she sounded like she’d just finished running a 5K. She was also pitchy enough at times, she could have been a baseball player. Sweet girl, train-wreck performance. For Abby to lose after that, she’d have had to fall off stage (screaming off-key as she did). Instead, she turned in a pretty powerful performance that went from soaring (pretty sure her biggest note chipped a klieg light hanging from the ceiling) to dazzlingly delicate. If I had a complaint about it, it was that occasionally on the choruses, she was so confident about the bigness of her voice that she threw away lines that could have and should have packed a bigger punch.

Team Blake: Dave Fenley singing “Stuck On You” (Grade: B+) defeated Kameron Marlowe singing “I Shot the Sheriff” (Grade: C+) — Kameron stolen by Adam | After hearing Dave’s country-soul rendition of Lionel Richie in rehearsal, Mariah had nothing but praise for him. She sensed that he was singing from the heart (and since he had his wife in mind, you’d certainly hope he was). The slightly stunned expression on Mariah’s face when Kameron started practicing his Bob Marley cover said a lot about the wisdom of his song selection. Mariah thought he was strong vocally, but Blake sensed that even Kameron was unsure that he’d picked the right number for him. On stage, Dave’s cover worked spectacularly well. There’s such an earnest sweetness to his raspy singing that he even managed to de-cheese a ballad that had always kinda reeked of brie to me. (Bummer that the Knockouts aren’t on iTunes this season — I’d buy that.) Second at the mic, dang. I really like Kameron. And his vocal here was fine — sometimes even much better than fine. (Dig his big, growly notes.) But overall, this performance just felt forced. “Pinched” is almost the word I’d use. Or maybe that was just his facial expressions throughout. Whereas Dave succeeded in sounding entirely natural on “Stuck On You,” Kameron failed to sound on “I Shot the Sheriff” like anything but a good singer trying (hard, so hard) to fit himself into a song that wasn’t quite right for him.

Did any of your favorites get the axe Tuesday? (Tyshawn for me… sigh.) Did any performance especially dazzle you? Vote in the poll below, then hit the comments.