Team Flash‘s new foe, dubbed Cicada, has the ability to dampen the metahuman powers wielded by Barry, Cisco and the like, setting him up to be one of the CW hit’s most vexing villains ever. Through the first three weeks of Season 5 (airing Tuesdays at 8/7c), Cicada has made clear his “dark” and “ferocious” agenda, says portrayer Chris Klein, while our first glimpse of the man behind the mask introduced other sorts of intrigue.

TVLine invited Klein to shed a bit of light on what spawned Cicada, what haunts mild-mannered Orlin Dwyer, and the big reveals still to come.

TVLINE | How did this role come about? Were you looking for a TV gig?
It was really, really cool.  I had the opportunity to go in and audition for this season’s villain, and the guys liked what I did. I’ll be the first to say it: It certainly is a departure for me to play a villain. So they asked me to come in again and try some different things, and they really responded to the ideas that I had and the performance that I gave.

TVLINE |  Right, you often play the guy the girls want to be with and the guys want to be.
Yeah, but I’m 39 now. People grow and hairlines recede and things change a bit. [Laughs] 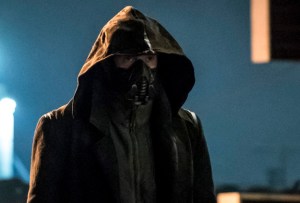 TVLINE |  Tell me about Cicada.
Cicada is some kind of villain, man. When I originally sat down with [showrunner] Todd Helbing to really get into the mindset of this guy… this guy has a vendetta. And that vendetta is a promise. We see in [the season premiere] when he comes up to Gridlock, he wants all metahumans to die. That’s dark, man. That’s ferocious. And now that Team Flash has had two really, really violent altercations with this guy, right from the get go, they’ve got to dig in. They know that this is not going to be easy, that they can’t just call on Sherloque to deliver them Cicada. They’re really going to have to get to work.

TVLINE | And what about his alter ego? Who’s the guy behind the mask?
We get a couple glimpses of Orlin Dwyer in the first few episodes, and we’ll see a lot more of who he is, why he is, how he is….

TVLINE | Will there be a specific backstory/origin episode?
There is going to be an origin episode, a few weeks down the line. But we are going to learn little tidbits moving forward. In [last week’s episode], we got a lot of clues. Detective Joe West picks up on something — “This guy might be a dad.”

TVLINE | Cicada did seem to get thrown off his game when Nora cried out “Dad!” the week prior, and when he heard baby Jenna cry. There seem to be triggers with this guy.
You caught that! That means the breadcrumbs we are laying are working. There’s a reason why Orlin is doing what he’s doing. There’s a reason why as Cicada he wants all metahumans to die. We will learn what that reason is, and we’ll get to judge Orlin for it. One of the coolest things about The Flash is that with every villain, the fans get an opportunity to judge them on their merits. Every villain has a reason for being, and Orlin’s is a pretty heavy one. This guy comes with a lot of sadness. It’s going to be a tough fight for Team Flash, because Cicada has this dagger that dampens metahuman powers.

TVLINE | Oh yeah, Team Flash had their asses handed to them the past two weeks. This is a formidable foe.
He’s not to be messed with. Team Flash has their hands full with this guy. And on top of that, one of real conflicting things is that Nora has changed the timeline, and because of it, this is a completely different Cicada than any Cicada Sherloque has ever caught before. He said he’s caught this guy , what, 20, 30 times? But it’s never been this guy, and Cicada has never come on this quickly or this powerfully before, in any other timeline., 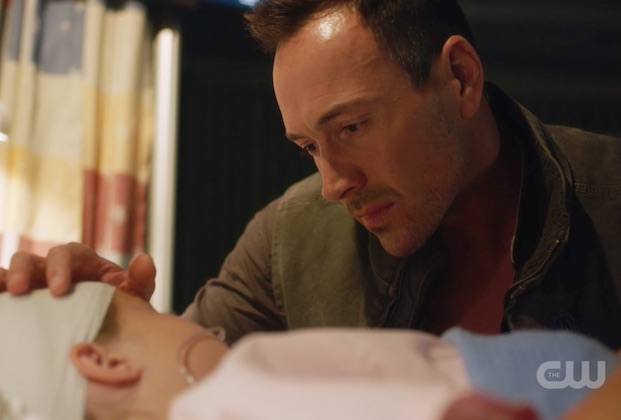 TVLINE | Will we see Team Flash members cross paths with Orlin, not realizing who he is?
[This Tuesday] you see Ralph and Sherloque really get into the nuts and bolts of investigating who Cicada is, and why he is. Team Flash is good, and they get dangerously close pretty darn quickly — but at the same time, Orlin’s no dummy. And he’s not scared. Orlin as Cicada is the kind of guy that could be standing right next to you and you might not know it. He has a way of appearing and disappearing that really confounds things. Because he’s a different kind of opponent than they ever chased before, Team Flash is going to chase their tails a bit.

What I love about Orlin is he’s in it for a reason. It’s too soon to say if it’s the right reason or the wrong reason, but the reason is heavy. We were introduced to a little girl in a bed at the end of [Episode] 503, and we see Orlin kiss her forehead, and the one thing that I can tell you and the audience is that that little girl is going to be very, very, very important to our story moving forward. She is one to watch and learn about.

TVLINE | Speaking of 503, did Cicada fly away at the end of his fight with Flash and Vibe?! Or was that just a big leap?
Call it a flying leap. [Laughs] That dagger can do a lot more than just dampen metahuman powers. And another thing that you’re going to want to keep your eye on — it’s not just the dagger. That doctor in the hospital wanted to take a look at a scar on his chest…. Is he a human? Because if he’s a human, why was that thing glowing? What is that about? Now we know there’s something going on inside of him, and that’s going to play a big part in how difficult he is to capture.

TVLINE | Juxtaposing his vendetta against metahumans with the powers he himself wields, I have to wonder: Is Orlin a bit self-hating…?
Aww, man, that’s a beautiful question. Todd and I talked a whole lot about that. Things have gone on in Orlin’s life that make him sad. He’s got some regrets. And there’s a bit of self loathing. We’re going to learn that there was a time in Orlin’s life that he is making up for. He made some promises that he is pretty keen on keeping.