This week on The Flash, Nora finally came clean about why it is that she is so cold to Iris. After locking horns with her mother multiple times through the episode, Nora tugged down her shirt collar to reveal a scar — left from where Iris will one day have implanted a metahuman power-suppressing chip.

Meaning, up until six months ago, Nora claimed, she had no idea she was a speedster! And worse, it wasn’t even her mother who finally told her!

But wait… didn’t Nora tell us in the season-opening voiceover that, 30 years into the future, XS is regarded as “the guardian of Central City”? And that in that role, she spends every day living up to the legacy of her dad, The Flash?

Now, I can’t recall off the top of my head if the show has stated on-screen for how many months Nora was shadowing Team Flash (at the wedding, Jitters, etc). But even if only, say, three months have passed since the time of the wedding, is that other three months enough time for her to discover and hone her speedster power, to the point that she becomes a city-saving hero?

Is Nora fibbing, or is the show’s math a bit fuzzy? Discuss. 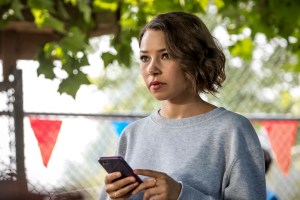 In the wake of that devastating reveal — and after Nora nearly killed her dad (after being hypnotized by newly created “meta tech”) — Iris maintained to her daughter that she surely had a good reason to one day implant the chip. Nora scoffed, countering that the chip was done solely to “control” her, to take the choice to be a hero away from her. When Barry walked in on the very heated conversation, Nora cued him to side with Daddy’s little girl, but Bar, bless him, in fact echoed exactly what Iris said — that being an undoubtedly amazing mother, she must have had a very good reason.

Seeing it was in fact two against one, Nora said she needed to go “rethink what family is,” moving out of the loft and in with Cecile and Joe.

What did you think of the bombshell Nora dropped? As well as the other big reveal, that in “punching out” DeVoe’s dark matter-infused satellite, Barry and Nora rained down upon Central City meta-creating shards, one of which seemingly struck Orlin Dwyer aka Cicada?