Gotham is going out with a bigger bang than expected.

In revealing its midseason plan on Monday, Fox announced that the fifth and final season of its Batman prequel series will run 12 episodes, up from the original order of 10. As such, Gotham will end its run with an even 100 episodes, which at the very least is appreciated by OCD types such as myself. 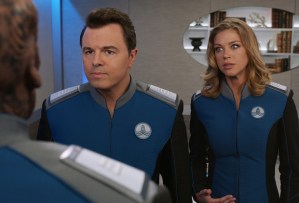 Gotham‘s end will begin on Thursday, Jan. 3 at 8/7c, where it will again lead into The Orville. (As quietly announced over the summer, the Seth MacFarlane-captained space dramedy will open Season 2 on Sunday, Dec. 30, following Fox’s NFL double-header, before settling into its regular Thursday time slot.)

Other midseason dates announced (or re-announced) by Fox include the celeb singing competition The Masked Singer on Wednesday, Jan. 2, leading out of Season 2 of Gordon Ramsay’s 24 Hours to Hell and Back.

The vampire thriller The Passage will premiere Monday, Jan. 14 at 9 pm, temporarily displacing 9-1-1, while Proven Innocent, a legal drama led by five-time Emmy winner Kelsey Grammer and Rachelle Lefevre, will hear its first case on Friday, Feb. 15 at 9 pm (after Hell’s Kitchen has wrapped its run). Get details on the new series here.

Lastly, Season 3 of Cosmos will premiere Sunday, March 3 at 9 pm.