While two of the Marvel/Netflix Universe’s core four heroes have been sent to the showers, Daredevil is having quite a moment. Season 3 boasts a 92 percent Fresh rating at Rotten Tomatoes, while the return of Wilson Fisk has catapulted the incarcerated crime boss to the upper echelon of Marvel villains from screens big and small.

What makes Fisk so special? Without spoiling much at all of Season 3, it can be said that his latest agenda is motivated by his genuine love of a woman, Vanessa Marianna, whom he endeavors to keep safe (if not eventually reunite with). That aspect of the character is “so important,” attests his portrayer, Vincent D’Onofrio,

Elaborating on the connection between the art dealer and he who mastered the art of the criminal deal, D’Onofrio says, “It’s fantastic the way he tries to get her back. He wants her back in his life and he’ll do anything to have that, so that’s basically the journey [of Season 3].”

Just as enamored as Fisk is with Vanessa, D’Onofrio has only the most glowing of words for sometime scene partner Ayelet Zurer.

“First of all, she has become a friend of the family now, and just to have her in town [in New York City] and hanging out with my wife and stuff is just so much fun,” he shares. “Her husband and her kid, we all do things together. It’s fantastic.

“Sometimes [when I work with her], I stop and just look at her and say, ‘Thank you so much for doing this with me,’ because I’m so flattered that I would get to work with somebody as lovely and as talented as she is,” he adds, warmly. “She’s just that kind of woman.” 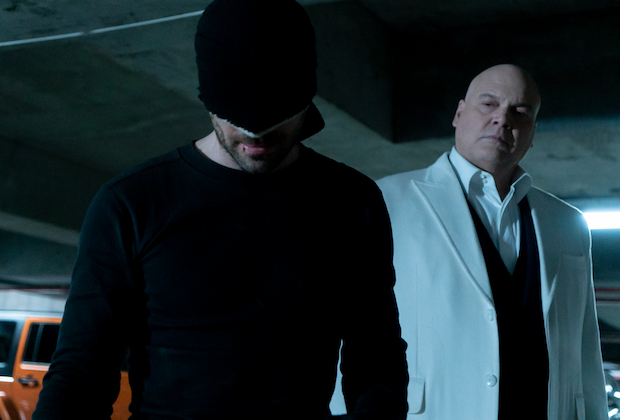 But as much as Vanessa occupies Fisk’s thoughts, both Daredevil and Matt Murdock (played by Charlie Cox), as Season 3 unfolds, command the attention of the criminal who has orchestrated his release from prison, to be controversially held on house arrest in a pretty sweet multi-(and we do mean multi-)level penthouse apartment.

What makes the dynamic between Daredevil and the crime kingpin such a delicious one? For a hero and villain who rarely get into actual fisticuffs (though when they do, stand back!), why are they so perfect for each other?

“It’s a very good question…,” D’Onofrio says, before pausing to put his thoughts together.

Moment later, he offers this: “I can only tell you that when I’m doing the scenes with Charlie, he is so amazing that I find him so annoying as Daredevil — and I can imagine that Fisk finds him the same way. He’s like a jumpy little pumpkin that jumps around rooms and does things and it’s so f–king annoying! It’s like the mosquito that you try to kill and you just can’t seem to get it, because it’s under here and under there and everywhere.”

Take that intolerance for the masked wrench that repeatedly jams up whatever crime machine Fisk has assembled, then add in Daredevil’s do-right mission (as askew as it may get toward the close of Season 3), and you get a superhero/villain rivalry that more than does its source material justice.

“It causes a good chemistry between us,” D’Onofrio says, “because his character is so righteous and he has this kind of duality going on inside him — especially in Season 3, where he truly becomes that dark side of Daredevil, of his persona. He even says at one point, ‘I’m Daredevil’ — he doesn’t say, ‘I’m Matt Murdock’ — and it’s pretty intense stuff. I think Fisk finds that even more annoying that he finds it difficult to get rid of this mosquito that keeps trying to bite him!”