Chilling Adventures of Sabrina‘s first season may end with a wink, but the Netflix drama’s stars had slightly different — and far more extreme — responses to the game-changing finale, which sets several characters on new paths, some darker than others. 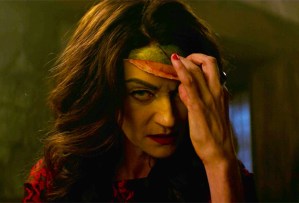 Let’s begin with Mary Wardwell, whom we can officially refer to as “Madam Satan” (or Lilith, “Adam’s first wife,” etc.) now that she’s decided to drop the act she’d been keeping up all season. Whether Madam Satan will share her true identity with Sabrina next season remains a mystery, but actress Michelle Gomez is ready to let her character’s freak flag fly. “I got the [finale] script on set and had to read it immediately,” Gomez tells TVLine. “I actually screamed. I yelped. Oh, my giddy Aunt Matilda.”

Even Ross Lynch admits that he “loves” the season finale, regardless of how things ended for Harvey and Sabrina, as does Lucy Davis, whose character receives a nasty surprise of her own (evil boyfriend!) towards the end of the hour. “That and Episode 9 are my favorites because all of the character work we’ve done starts to properly come to fruition,” Davis tells TVLine. “I was just whipping through those scripts.”

But no one has a more glowing review of Season 1’s final hour than the teenage witch herself, Kiernan Shipka, who was excited to see Sabrina finally embrace her dark impulses. “It’s the right amount of heartbreaking and sexy and intriguing,” she says. “And I don’t even want to say that it answers things, because it doesn’t. We started shooting Season 2 right away because of that momentum. We couldn’t just stop. It would have been so weird, as an actress, to just do that finale and then stop filming. A week hiatus was enough.”

What are your thoughts on Sabrina‘s first finale? Hopes for Season 2? Whatever’s on your mind, drop ’em in a comment below.