America’s favorite teenage witch was reconjured on Friday with the arrival of Netflix’s Chilling Adventures of Sabrina, in which she walks a slightly darker path than her previous incarnations. Whereas other Sabrinas fretted about science tests and school dances, Kiernan Shipka’s version has more pressing dilemmas on her plate — like deciding whether or not to pledge her soul to Satan and vow to serve his dark agenda for all eternity. You know, teen stuff.

Though it conveniently excludes all the gory details, Sabrina’s opening voiceover in the series premiere does a serviceable job of explaining the issue at hand: “In the town of Greendale, where it always feels like Halloween, there lived a girl who was half-witch, half-mortal who, on her 16th birthday, would have to choose between two worlds: the witch world of her family, and the human world of her friends.”

Let’s start with the witch world: Everyone at Spellman Mortuary — because of course this version of Sabrina lives in a literal funeral home — is abuzz in anticipation of her 16th birthday, or as they refer to it, her Dark Baptism. (Meanwhile, that is an MTV reality show I would watch the hell out of.) Sabrina’s stoic Aunt Zelda is particularly excited to see her niece fulfill her Satanic destiny, while her Aunt Hilda appears more sympathetic to her trepidation. As for her cousin Ambrose’s thoughts on the matter… I don’t even know, Ambrose is just so cool. Heart-eyes emoji. 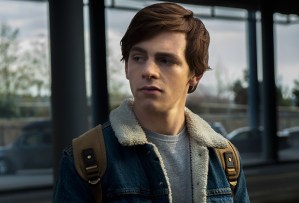 Now let’s talk about Sabrina’s friends, the living representations of her connection to the mortal world. What her group lacks in numbers — it’s just Roz and Susie, plus that human dreamboat Harvey Kinkle — it makes up for in loyalty, as everyone looks out for one another in their times of need. For example, when the principal refuses to punish football players for sexually harassing Susie, Sabrina (with an assist from Ambrose, who is so cool) magically tricks him into thinking he’s being overtaken by hoards of spiders.

There are also characters that seem to straddle both of Sabrina’s worlds, like Mary Wardwell, a mild-mannered teacher at Baxter High (as well as Greendale’s unofficial historian). She’s harmless when we first meet her, but within minutes, she finds herself possessed by the evil entity known as Madam Satan. From that moment on, the glammed-up “Ms. Wardwell” has one goal in mind: getting Sabrina to sign her name in the Book of the Beast and complete her Dark Baptism.

Already unsure of which (witch?) path to take, Sabrina’s confusion is further compounded by a trio of supernatural bullies from the Academy of Unseen Arts. These witches — and I mean that in the not-nice sense of the word — are so threatened by Sabrina potentially fulfilling her destiny that they literally put a curse on her. (Rude.)

To aid her in this difficult decision, Sabrina seeks out a magical fruit with the power to reveal what lies ahead, should she choose to follow the Path of Night — and the future is not pretty. We’re talking witches hanging from trees, hands covered in blood, a horrific demon, the whole nine yards. (Side note: Sabrina’s journey to reach this fruit gives us our first taste of what Salem, who’s actually a goblin in the form of a cat, in action. He fends off that beastly creature like it’s nothing.)

With visions of horned demons still dancing in her head, Sabrina returns home, only to discover another unsettling scene: Father Blackwell, Satan’s representative on Earth (no big!), has come to speak with Sabrina about her Dark Baptism. Specifically, he’s come to change her mind. Dun, dun, dun.

Did Chilling Adventures of Sabrina meet your expectations? Vote in our polls below, then drop a comment with your full review of the premiere.