GLAAD’s “Where We Are on TV” report for a third consecutive year forecasts an all-time high in the number of lesbian, gay, bisexual, and transgender and queer (LGBTQ) characters on TV, while also noting that both greater racial diversity and gender parity has been achieved among those roles.

Broadcast TV’s representation of LGBTQ characters in the 2018-19 TV season is forecast to be 8.8 percent (or 75 out of 859 series regular roles), up nearly one-third from 2017-18 to mark an all-time high. (Broadcast TV also will have 38 recurring LGBTQ characters, up from last season’s 28.) The CW ranks highest with 16 percent, followed by Fox (11), NBC (7.7), ABC (5.8) and CBS (3.4, and the only broadcaster to decrease year over year). Cable TV went from 103 to 120 series-regular LGBTQ characters, plus an additional 88 recurring; FX, whose Pose accounts for more than half of the trans representation on cable, leads with 23 characters, while Freeform, Showtime and TNT each tally 21. Streaming services such as Netflix, Amazon and Hulu add 75 regulars plus 37 recurring, surging 60 percent year-over-year.

GLAAD reports that gender parity was finally achieved among LGBTQ characters across all platforms, with the male/female split going from 55/44 to 49.6/49.6 (with one non-binary character making up the difference).

On broadcast TV, gay men make up the majority of LGBTQ characters (at 42 percent, down a bit from last year), while lesbians account for 25 percent. Bisexual representation across broadcast, cable and streaming dipped to 27 percent, with women (84) still outnumbering the men (33) by a higher margin (72 percent) than reflects actual society. The number of transgender characters (26) shot up 53 percent, with FX’s Pose boasting the most ever on any one series’ cast and The CW’s Supergirl setting the stage for TV’s first trans superhero.

Cable and streaming have each held onto their singular asexual character (Shadowhunters‘ Raphael and BoJack Horseman‘s Todd), while broadcast continues to feature none. (Of note, Netflix’s Chilling Adventures of Sabrina has a pansexual character, the warlock Ambrose.) 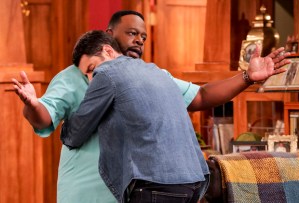 The “Where We Are on TV” report also takes stock of the representation of all people of color, which this year rose to 44 percent on broadcast, marking six consecutive years of gains. Leading the Big 5, NBC was followed closely by The CW, and then ABC, Fox and CBS (which this year rose six percentage points). In turn, the racial diversity of LGBTQ characters on broadcast TV rose from 36 to 50 percent, with LGBTQ POC eclipsing white people for the first time ever. On this front, streaming (at 48 percent) and cable (46 percent) also saw sharp gains.

Broadcast TV’s representation of women held steady at 43 percent of series regulars — whereas the country’s population is 51 percent female. The CW, with 46 percent female characters, comes closest to mirroring society.

Lastly, TV’s representation of characters living with a disability — including non-apparent ones such as HIV, bipolar disorder, OCD and PTSD — rose to 2.1 percent but remains “a severe under-representation,” the report notes, compared to the real world’s 13.3 percent.

“Where We Are on TV” forecasts are based on scripted series which aired or are expected to air in primetime between June 1, 2018 and May 31, 2019.