All is not right with Dean Winchester. Thursday’s Supernatural (The CW, 8/7c) finds the hunter back in his body, but he’s far from out of the woods following his possession by the archangel Michael.

Back at the Men of Letters bunker, “you’ve got a group of people who are incredibly happy to see Dean, and also incredibly worried about the fallout of what all this is going to be,” executive producer Andrew Dabb previews. “They all know what Dean went through was brutal and dark, and Dean’s really good at pretending everything is OK, but everything is not OK.”

Below, Dabb reveals how Dean is handling his recent trauma, and how his brother Sam will try to help him through it. Plus, the EP rules out a theory about Dean’s possession, as well as some speculation about Nick’s recent murderous actions.

TVLINE | After everything that he’s been through recently with Michael, what kind of Dean are we looking at in this week’s episode?
You’re looking at a Dean that’s still a little shell-shocked from everything that’s happened. He’s walking not just back into himself after the last episode, but back into Sam, Cas and Jack, who’ve all kind of shifted over the past few weeks, [and] back into a bunker that’s suddenly full of a lot of hunters he doesn’t know or has very passing relationships with. You’re dealing with a Dean that’s maybe a little bit besieged on all sides, and as Dean so often does, [he] throws himself into a case.

TVLINE | The last episode ended with Michael rather unexpectedly leaving Dean, which led to a lot of speculation. Has Michael truly departed what is supposed to be his perfect vessel? And if so, why would he do that?
He has departed. The question of “why?” is one that will be explored. But he has definitely gotten out, and Dean is not secretly possessed.

TVLINE | How does Sam feel about Dean’s unexpected homecoming?
Sam’s thrilled about it. He got his brother back. It’s not that he’s not worried…. But he’s very happy to have his brother home, and very focused on helping Dean in any way that he can.

TVLINE | Is Sam concerned at all about Dean and his well-being now that he’s out of this trauma?
Yes, of course. Sam has been through possession before. He, more than most, knows what Dean’s going through coming out of it. He knows the psychological toll it’s taking. Even if Dean will not admit it to himself, Sam knows or has some idea of what’s going on. A lot of this week’s episode is him kind of trying to drill down on Dean and really get Dean to open up about his experiences and his emotions about it — which, with someone like Dean, is maybe not always the easiest conversation to have.

TVLINE | What is the significance of the scar Dean is sporting on his arm in the promo photos?
It’s a brand-new scar that he got while he was possessed by Michael. It seems to plant the idea that something hurt [Michael] enough to give him a scar. What can do that? What can hurt an archangel in that way? That becomes a real jumping-off point for this [week’s] episode as our guys try to find out what that object is. 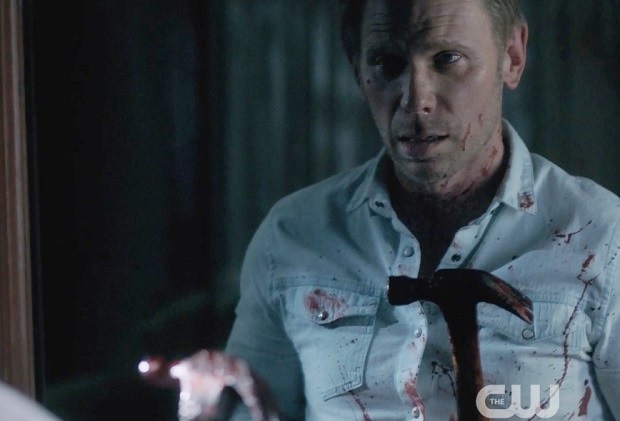 TVLINE | We have to talk about that crazy, bloody ending last week with Nick. What should we take away from that scene about who Nick was before Lucifer and who he is now?
You have to understand who Nick was before Lucifer was not that guy. He would not have beaten someone to death, let’s put it that way. Who Nick is after Lucifer is [in] some ways a very different person, and in some ways, a person that’s [looking] around for anything he can hold onto, especially when it comes to the murder of his family. He’s convinced if he can find out who killed them [and] why, if he can get revenge, he will feel better about not just what happened to them, but about his own choices. I don’t know that that’s actually going to be the case, but that’s the road he’s going down.

TVLINE | There are a lot of fan theories floating around about what’s going on with Nick, whether there’s a little bit of residual Lucifer in him, whether he might be possessed by Michael. Anything you can say on that front?
I will say Nick is Nick, and the actions he’s taking are [that of] a very damaged man that’s gone through years and years of intense trauma, and [are] about how he’s dealing with that. He’s chosen to deal with it by being, let’s call it, proactive. But at the end of the day, you can’t be possessed by the devil for years and years without it affecting you, one way or the other. You still absorb some of that energy. Some of that trauma still affects you.