This week on The Flash, Barry & Co. learned some unsettling truths about their new adversary, Cicada, against whom they once again found themselves nearly, and near-fatally, powerless.

Following an Easter egg-laden cold open in which a Young Nora browsed the future’s Flash Museum (screeners don’t allow pausing, so hit me with your finds!), Barry and Iris’ daughter confirmed for the team that, yes, she knows of Cicada — in that no one ever found out who he was or whence he came. Oh, and he is the one foe that The Flash (or any superfriends) never defeated! 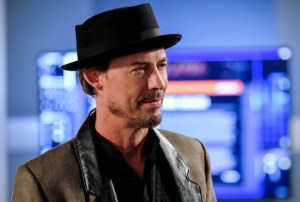 The team decides they need some added brainpower to best this baddie, so Cisco beams in Herr Wells. After fanboying over Barry and flustering Iris with compliments, the German in turn recommends Sherloque Wells, who apparently does not come cheap. (Who knew that S.T.A.R. Labs stock had any value!)  The multiverse’s greatest detective takes a look at the evidence at hand and points Flash and XS at David Hersh, a Unabomber type who tinkers with bombs at his remote cabin. Flash and XS easily capture Hersh, but it turns out he is not Cicada (due to shoe size, the presence of zero dark matter, etc;). It is then that Sherloque admits that he sicced them on Hersh mainly because on every other Earth, that was Cicada’s alter ego. But due to Nora’s arrival in this timeline, a different Cicada, with a different kill list, is in play.

Cicada meanwhile shows up at Joe’s house, having deduced that the detective is pals with the metahuman known as Vibe. Cicada tortures Joe to summon his superfriend, but Joe refuses. Cecile then discreetly enters the room, having “heard” Joe’s thoughts. Her finger hovers above the Flash Signal alert button, but Joe uses his thoughts to warn her not to draw Vibe into the situation. But when Cicada starts to get really rough with Joe, Jenna’s cry distracts and stops him; that’s when Cecile alerts Team Flash. Just as Cisco arrives on the scene, Cicada tackles him right back into his breach, their destination unknown.

When Cisco, while being chased through some woods, contacts Team Flash, Sherloque uses intel about the specific trees and cricket sounds to help Barry nail down the specific forest. Alas, Barry’s powers get whammied, just like last week, the moment he comes face to face with Cicada. Luckily, Nora overcomes some recent skittishness about screwing things up to race to the scene with a lethal gizmo from the pipeline. Cisco hurls it at Cicada, only to have it batted back at him by the baddie’s dagger. As a result, Cisco appears to be on the receiving end of the disintegrating blast!

After Cicada flies (!) off, a distraught Barry discovers that Nora and Cisco only faked Vibe’s death, using one of the portable breach devices. And Vibe shall remain “dead” for the time being, and thus off Cicada’s radar.

In the aftermath of the week’s big battle, Barry and Iris invite a reluctant Nora to crash with them at the loft, since Sherloque will be availing himself of the long-hidden “lounge” (which apparently comes with a full bar!). Later, the deductive Sherloque privately asks the future speedster about what led her to finally act, by punching the satellite, after months and months of merely shadowing her parents. Did she arrive at that momentous decision on her own…? Sherloque pretends to wave off his inquiry, but Nora appears obviously rattled/found out.

Elsewhere in the episode:  Ralph — in the wake of becoming a humiliating Internet meme — helps Caitlin follow up on her father’s faked death certificate and her mother’s possible role in it. Dr. Tannhauser, cold as ever, laughs off her daughter’s theory, insisting that Thomas is very much dead. Going through some old things, Caitlin finds what appears to be a suicide note that her dad had left for her. But upon combing some of his papers, she realizes that his seemingly nonsensical data is actually encrypted with a code she used as a kid. Deciphering it, she comes up with, “CAITLIN COME FIND ME.”

What did you think of “The Death of Vibe”?