This week on Black Lightning, both Lynn and Jennifer got unexpected help, Jefferson and Khalil tried to adjust to their new roles, and Anissa continued to cross the boundary between right and wrong.

Doctor’s Appointment
With Green Light-related incidents happening so frequently, Agent Odell is bringing Lynn some assistance: Dr. Jace, a highly-qualified chemist who has unmatched experience in protein synthesis simulations… and who just happens to be a smirking, unapologetic psycho.

When Dr. Jace is escorted into the meeting in full prison ensemble glory (orange jumpsuit accessorized with shackles), Lynn is unnerved but regains her composure long enough to invite the doctor to join the team, and to highlight Jace’s unauthorized experiment that caused 1 patient to die while 10 others lost their feet. She even offers to help facilitate a visit between the doctor and her son as payment.

School Daze
Jefferson and Gambi watch footage from Garfield High on the day of the attack, but none of the cameras captured Tobias and Syonide at the school. Eager to locate Tobias, Jeff suggests showing the police the footage from his goggles cam. Gambi doesn’t think it’ll help, so Jefferson concludes that the best way to get to Tobias is through Khalil. Gambi asks his protégé to bring back a dart so he can develop an antidote.

When Jefferson arrives at Garfield, he is shocked to see that metal detectors are being installed. He goes to his former office and meets Mike Lowry, the new principal. Jefferson welcomes the outsider and offers to show him around, but Lowry is curt and frankly kind of a jerk. That night, the former principal cleans out his office with a sad, almost hopeless expression on his face.

Khalil Crosses the Line
Khalil is still being verbally and physically abused by Tobias, as his boss charged him to step up now that Syonide is dead. He orders Khalil to burn the contents of the evidence envelope Detective Sommers gave him, which appear to be the paper Tobias shoved down Alvin Pierce’s throat.

Later, Tobias tells Khalil to check Reon, a member of The 100 who has been off schedule with his protection payments. When Khalil goes to Club 100, one of the gang members calls him Tobias’ bitch, so Khalil picks him up by the throat and lets him know his name is Painkiller. He then kills Reon shortly after he shows up at the club.

Khalil meets up with Black Lightning after finding out that the hero warned his mother that he will die if he continues to work for Tobias. All Black Lightning wants is Tobias’ location so he can take him out, but Khalil is doubtful. Black Lightning zaps the boy, who shoots a dart in retaliation. Black Lightning captures the dart, while Khalil takes off.

The Robbin’ Hood Returns
Reverent Holt’s church-sponsored clinic is in danger of being shut down because of a redevelopment project. Anissa is upset because she knows that without the clinic, people who can’t afford health care will die, so she disguises herself and visits the reverend. She tells him to use the money to keep the clinic open, but he tells her there’s not enough left now that lawyers for the Freeland pod children’s families have been paid. He says about $300,000 more is needed. Before Anissa can leave, Reverend Holt prays for her.

Anissa visits Gambi to ask questions about the Zlovak redevelopment project, and he tells her it’s a money-laundering scheme. Gambi hacks into Zlovak’s account and finds out he doesn’t have enough money to buy the clinic. Anissa connects the dots, realizing that she can intercept when he gets his next payment. She convinces Gambi to back her up at the money drop, where she literally secures the bag. “God bless you sister, whatever the hell your name is,” Reverend Holt says when she makes the delivery. 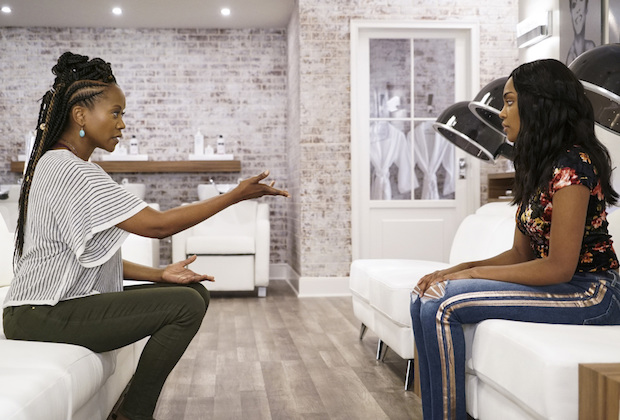 Therapy Session
Jennifer is getting restless being in the house, so she plays therapist for her sister, encouraging her to drop her current fling and find a meaningful relationship. Her therapy works — Anissa follows the advice and reconciles with Grace.

Speaking of therapy, Jefferson and Lynn arrange for Jennifer to meet a telepathic woman named Perenna, who transports her to another dimension with one touch. Jennifer is upset because A) she doesn’t want someone in her head, and B) she thinks that her parents see her as a monster. They explain to her that they’re trying to help her the best way they know how. She changes her mind and meets with Perenna, who transports her to a “safe place” — a salon, which as a cornerstone of the black community is seen by many women as a sanctuary. Perenna’s first (and probably hardest) job will be getting Jennifer to deal with her feelings, which won’t be easy because that girl is all over the place.

Whale Hunt Over…?
Deputy Chief Henderson and Freeland police officers find Detective Sommers’ car, which was torched by a pro to hide evidence. Henderson visits Jefferson at home and asks for help getting information from the culprit, who refuses to talk to the police. To be clear, he wants help from Black Lightning, not from Jefferson. The tension between the two men is thick, and Jefferson says they need to talk at some point. But that time hasn’t come yet for Henderson, who walks away.

The guy who torched Sommers’ car tells Black Lightning he was threatened into doing the job. This is proof that Tobias is still in town, and thanks to a tip (from whom??), Freeland PD find Tobias visiting his sister’s coffin, where they arrest him for Alvin Pierce’s murder. The arrest seemed almost too easy, and since Tobias is always three steps ahead, this could be part of a plan.

Although Henderson is still angry with Jefferson, he still comes to his friend’s house to tell him that Tobias is in custody. And now that Tobias is behind bars, Gambi may be able to get to that briefcase after all — especially with help from Kara, who’s still alive (ugh!) and manages to find enough strength to show up on his doorstep….