We’ve gotten used to big movie stars doing TV for a while now… but still, Julia Roberts starring in a TV series is a pretty big deal, right? She’s not wasting her time on the small screen, either: Her new Amazon drama Homecoming — debuting Friday, Nov. 2 on the streaming service — is a smartly layered, coolly effective thriller that gets more intriguing as it goes, slowly unraveling a mystery made up of intricately interlocking clues. 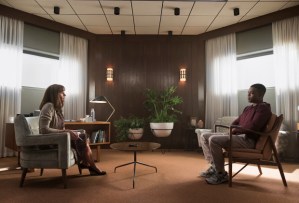 Homecoming hops back and forth in time to tell the story of Heidi Bergman (Roberts, in a distractingly bad wig), a counselor at a facility for American soldiers returning home from war. There, the soldiers are offered therapy and job-training skills to help them reenter society, and Heidi strikes up a tentative friendship with one of her patients, Walter Cruz (Shots Fired‘s Stephan James). But there’s a sinister vibe lurking underneath all of this, and years later, Heidi is a waitress at a cruddy seaside diner when a Department of Defense investigator (Boardwalk Empire‘s Shea Whigham) drops by to ask questions about what exactly happened inside that facility. Yeah, what did happen?

Mr. Robot creator Sam Esmail directs every episode here — it’s created by Eli Horowitz and Micah Bloomberg, based on their podcast — and he has an unmistakable visual flair, with lots of off-kilter framing and extreme close-ups that ratchet up the tension even further. Homecoming also shares Mr. Robot‘s ultra-paranoid worldview and creeping sense of technological dread, along with a healthy distrust of major institutions. (Heidi’s facility is actually a subsidiary of Geist Group, a behemoth conglomerate that feels a lot like Mr. Robot‘s E Corp.) The more we learn about Heidi’s place of work, the more we start to feel like something very wrong is going on there, and Homecoming develops into a taut conspiracy thriller in the vein of ’70s films like Three Days of the Condor and The Parallax View.

Each episode of Homecoming is only a half-hour long (I’ve seen six of the 10), which is unusual for a TV drama, but it works well here, keeping the pace lively and the plot focused on the central mystery. (Between this and Facebook Watch’s excellent Sorry for Your Loss, half-hour dramas are having a moment, and as a TV critic with too much to watch already, I’m all for it.) Homecoming will end up being an ideal binge watch, I think: It’s the TV equivalent of a riveting page-turner, with each episode peeling back another layer of the mystery, getting us closer and closer to the rotten core. 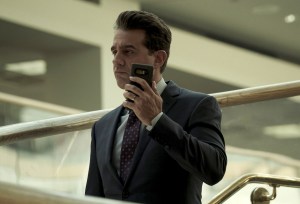 At first, it’s hard to see why Roberts would sign on to play Heidi, who’s a soft-spoken enigma, and not at all the kind of meaty role that lured, say, Nicole Kidman and Reese Witherspoon to HBO for Big Little Lies. But two or three episodes in, we start to realize why Heidi is the way she is, and it all begins to make sense. (The scenes set years later with Whigham also seem out of place… until we learn why they’re there.) Esmail has assembled an exceptional supporting cast to back Roberts up, too: James is magnetic in Walter’s therapy scenes with Heidi, along with Shameless‘ Jeremy Allen White as a volatile fellow soldier of Walter’s, and the always enjoyable Bobby Cannavale as Heidi’s alpha-male corporate boss Colin.

It takes a few episodes for Homecoming to start showing its cards, and the focus is on unspooling the mystery rather than building the characters, so emotional depth is sometimes sacrificed in order to keep the narrative freight train chugging along. But it is an awfully good mystery, after all, with each episode lasting just long enough and teasing us just enough to keep us hooked. It’s so good, in fact, maybe it’ll convince Roberts to make this TV thing a full-time gig.

THE TVLINE BOTTOM LINE: Amazon’s Homecoming is a stylish thriller, powered by a many-layered mystery that gets more intriguing as it goes.