Think of this as a titanic edition of Matt’s Inside Line.

Prior to hitting the red carpet for the world premiere of the DC Universe streaming service’s Titans (new episodes release every Friday), I solicited questions from you, the TVLine readership. The response was impressively super, and though the Titans cast and EPs endeavored to keep some secrets, scoopy/spoilery vittles are to be found in the Qs-and-As below: 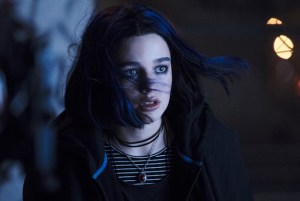 “What mindset does Teagan Croft get into for the role of Raven?”
“It’s interesting because when you do it for nine months, you get into a rhythm,” Croft shared. “As soon as I step on set, when I get the wig and makeup on, and the costume, it really helps get into that head space. I’m not really Teagan anymore, I’m Raven. Also, it’s about being quieter than I am in real life!”

“What arc does Starfire have in the first season?”
Currently battling amnesia and about to make the acquaintance of Raven, “She starts to find out who she is,” said portrayer Anna Diop. “She’s very instinctive, so sometimes she’ll have the urge to do something, and she’ll just do it. Like, ‘Oh, I guess I have this power!’”

“Any chance we’re going to get some LGBT characters?”
“Of course,” affirmed executive producer Geoff Johns. Perhaps alluding to Miguel Jose Barragan aka Bunker, he said, “There’s one Titan that already is gay, that we’ve talked about bringing on — probably next season.”

“We know Donna Troy is showing up. Are we going to see her friendship with Kory  explored?”
“It’s an interesting relationship that comes about when Donna Troy (played by Man in the High Castle‘s Conor Leslie) and Starfire meet… You’ll have to watch!” teased Diop. Asked to at least preview the circumstances under which the ladies cross paths, she politely deferred, “I can’t, because I think it will give too much away.” 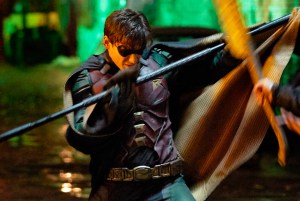 “Will the whole team have costumes eventually?”
The Titans “are all young people from dysfunctional systems trying to form one on their own,” said executive producer Akiva Goldsman. “And as they start to find themselves, they’ll start to find the costumed identities we recognize.”

“Will we be seeing the infamous Titans Tower anytime soon?”
“Over Geoff Johns’ dead body,” quipped Goldsman, with a nod to the fellow EP and former DC Entertainment CCO.

“What mindset does Ryan Potter get into for the role of Beast Boy?”
“I always lead with honest intention of the character,” Gar’s 23-year-old portrayer shared. “Everything has to come from not a childish mentality, but he can’t seem dumb…. He’s a kid in a candy store. He’s the light at the end of a dark hallway — and we can be in a dark hallway sometimes on this show.” 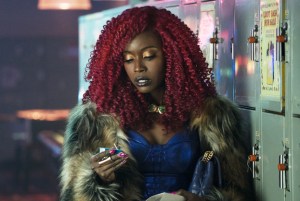 “Are we going to get a story arc about Starfire’s Tamaranean heritage? Maybe even a Blackfire appearance?”
To the former, Diop freely avowed, “Yes, yes we are” going to get into the Tamaran of it all, in part via flashbacks. But as for meeting Starfire’s sister, she (again) hedged, “You will have to wait and see!”

“Will Raven learn magic?”
“Raven will learn to harness her power, which is magic,” Croft shared. (And in response to another reader Q, she confirmed, “Yes, she can heal.”) 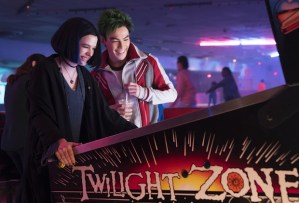 “What type of relationship would you say Raven and Beast Boy have in the show?”
Croft says that as dark and twisty as Rachel can be, her rare, lighter moments “are with Beast Boy, because Gar is the only one who can make her smile and make her happy.”

“Will Dick and Kory’s relationship be explored in the first season?”
“We do explore our relationship,” starting with the Friday, Oct. 26 episode, says series lead Brenton Thwaites. “Through a series of events, [Kory] kind of fulfills Dick’s role when he loses Rachel and she becomes a surrogate protector for Rachel. Through that, we meet and then form a relationship over the course of the season” — one that, he says, “warms down, warms up, like an old kettle!” 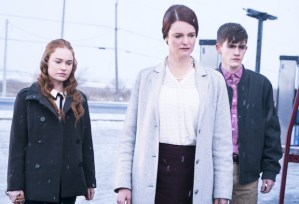 “Who’s the villain of Season 1?”
“There is a Big Bad,” said Thwaites, though it is not the person we see the Nuclear Family report to at the end of Episode 3. Rather, that person “is the guy behind the guy,” Thwaites revealed. Dick’s portrayer then described the Big Bad thusly: “The evil force on this show has multiple different colors and visions; it is a human, played by a human actor; and there are sci-fi elements to it.” Roll it all together and you get a final boss who “requires us all to band together, to use all our skills to overcome him.”

“Will Dick Grayson become Nightwing?”
Ahh, the million-dollar Bat-question. “That’s the long game,” said Goldsman. With Season 2 already greenlit, “Our whole first season is an origin episode, the birth of the team.” Added Johns: “Obviously, Dick Grayson’s evolution from Robin to Nightwing is a big part of his character, and at some point he will evolve into that.”