You’ll have to excuse Matt Murdock if he’s not doing a victory lap when Season 3 of Marvel’s Daredevil arrives this Friday, Oct. 19 on Netflix.

Sure, surviving an entire office building’s collapse on top of you — as Matt did at the close of the Defenders team-up miniseries — is worth celebrating. And no one would think twice if you were grab 15 minutes of fame with a GMA appearance. But Matt’s simply in no mood. Instead, he is lying low after being found and delivered to the St. Agnes Orphanage, where he’s coping with a debilitating setback.

“I think it’s been a hell of a week for Matt Murdock!” series lead Charlie Cox chuckles, accounting for the character’s decision to play dead. “It was only a week ago that he lost Elektra, and then with everything that happened in The Defenders… it’s just been a lot to take on.”

There’s also the fact that Matt, a Catholic, feels a bit snubbed by God, coming away from his near-death with a new handicap to accompany his lost sight.

“One of the reasons Matt has continued to engage in vigilante justice — even when it goes badly, even when he’s terribly injured, even when people die — is because he genuinely believes that it’s God’s will that he does that,” Cox explains. “He believes that these talents that he has, these gifts, are God-given, so if he’s not killed, but those things have been taken from him… it’s pretty hard to find a reason for that.” 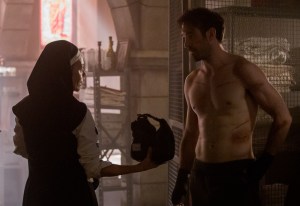 The woman in charge of Matt’s stealthy care, Sister Maggie, bears the brunt of his new cynicism. But it’s who he was before the accident that gives her most pause, because of their shared past.

“It’s really hard for her to see what he’s going through,” says Season 3 addition Joanne Whalley (The Borgias), who plays Maggie. “Both of them are going through a similar crisis, if you like, of questioning their faith, so she really empathizes with him.” Especially since, Whalley hints, Maggie “has her own backstory, too.”

Maggie also has a bit of spunk to her, for a nun. “She has lived in Hell’s Kitchen all her life, she has worked hard, she knows what life is like,” notes Whalley. “She’s tough because she had to be. She’s a fighter.” Just like… Matt.

Matt’s trusted friends, Karen and Foggy, meanwhile have been left to fret over his fate in the wake of the Midland Circle collapse. Once the truth comes out, there will be new fences to mend. “As much as Matt feels like, ‘I’m sparing my friends from knowing me, and all the havoc I wreak,’ it just ends up hurting us. We end up feeling like we’re not important,” says Deborah Ann Woll. “[But] the more we go through the season” — and because of very spoilery things that happen to Karen — “the closer I can see the pain and reach out.” 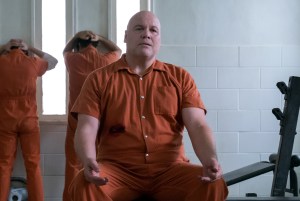 What will it take to eventually nudge Matt out of the shadows at St. Agnes and push him to test his new limits? The answer may lie in Wilson Fisk’s possible release from prison, which the crime boss is quite anxious to facilitate when Season 3 opens. Buy why exactly does he want out, and why now?

“I can tell you some of the reason… and some I can’t,” answers Vincent D’Onofrio. “Some of the reason is because he wants to be with the love of his life, Vanessa, and he’ll do anything to have that.” But as for the rest of his motivation, “We should just leave it at that for now,” the actor hedges, grinning.

Two new players figure into Fisk’s agenda. FBI Agent Ray Nadeem (played by The Fosters‘ Jay Ali) is in a tough financial spot when his turn comes up to handle the incarcerated crime boss. “He was paying for his sister-in-law’s cancer treatment, which has in turn made his credit really bad,” says Ali. “And when you have bad credit in the FBI, you get overlooked for promotions, because you’re at risk for criminal organizations to take advantage of you.” Not that Fisk would ever take advantage of a lawman. 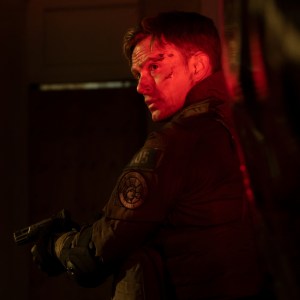 Also poised to enter Fisk’s orbit, and in spectacular fashion, is FBI Agent Benjamin Poindexter. “He does make quite an entrance,” boasts Wilson Bethel (Hart of Dixie), who describes the character as “a highly skilled warrior who also has deep psychological issues. When we meet him, he’s at the beginning of a path that will ultimately make him lose control.”

Indeed, Fisk “sees a little string of ‘disease’ inside” of Poindexter as they get to know each other, D’Onofrio shares. “I just need to be able to position myself to grab that little piece of thread and pull and pull and pull, until I expose it all.”

No one, showrunner Erik Oleson included, is freely using the B-word — Bullseye — to ID Bethel’s character, though that is for good reason: Dex’s is an origin story. “We had the same thing with Frank Castle in Season 2. He was just Frank Castle” and not Punisher, notes Woll. “Ben Poindexter is the person we’re getting to know.”

Those who have seen the full trailer for Daredevil Season 3 get a sense of Dex’s costumed role in it, which points toward a well-known comic book arc. “It’s an original story that takes pieces of ‘Born Again,’ and takes pieces of other comic book runs, but is related to the world we are living in today,” says Oleson. The result, he says, is a “twisty-turny conspiracy thriller that has a lot of lightning-bolt moments of action.” For comic book fans in particular, “There are moments that you’ll recognize, that pop up when you don’t expect them, where you will jump out of your seat with glee.”