For Dylan McDermott, stepping back into the Murder House on Wednesday’s American Horror Story: Apocalypse “was like coming home, honestly,” he tells TVLine. “Even though it’s been seven years [since I played Ben Harmon], it felt like I never left, like I was just doing another episode.”

But the truth is, a lot has changed since McDermott originated the role back in 2011. For example, the child that Ben’s wife conceived with an evil spirit has grown up to become the all-powerful Antichrist. Though McDermott admits he never imagined that the series’ mythology would expand in such a way — let alone that his character would play a key role in that expansion — he doesn’t seem all that surprised.

“American Horror Story is a phenomenal show, and Ryan [Murphy] and Brad [Falchuk] have done such a great job with it,” he says. “When I first read the pilot, I knew I had to do this show. A couple of times in your career, you read things and know they’re for you. The Practice was one, and American Horror Story was another. I knew I had to do both of those shows. I also came back in Season 2 and had a great time as Johnny Morgan. When Ryan asks me to do something, I’m there.”

Below, McDermott fields some of TVLine’s burning questions about Ben’s return, including his thoughts on that whole crying-and-masturbating for eternity thing: 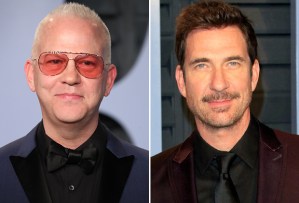 TVLINE | How exactly did this return come about? When did that conversation start?
I’ve actually been talking to Ryan for a while, and then I saw him at the Vanity Fair party, and I think it dawned on him then that he wanted me to come back. He always had in his mind that he wanted to do this Murder House revival — originally a different year, but then he decided to do it this year.

TVLINE | Be honest: Are you disappointed you didn’t get to wear the Rubber Man suit this time?
You know, you always hope you’ll get to put that thing on, because it’s so amazing. Honestly, though, that thing does not breathe You sweat like you can’t believe in it.

TVLINE | Switching gears just a bit, how was it working with Sarah Paulson as a director vs. a co-star?
She’s wonderful. She did such a great job. And she’s so sensitive. She really knows how to speak to actors. She knows the shots she wants, she knows how to give direction, she knows when to leave people alone — I was really impressed by her. An actor can be brilliant, but you never know what their directing skills are going to be like. I thought she did an incredible job. 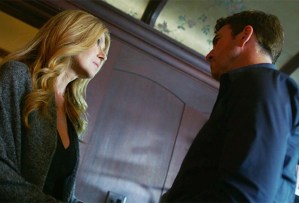 TVLINE | Seeing you and Connie Britton together was also really special. How do you feel about the conclusion of Ben and Vivien’s story?
I thought it was really cool. Everyone’s in their own little hell, and the fact that Vivien hasn’t spoken to Ben after all this time — even though he has such remorse for what he’s done, and that he still loves her — is such a sad little tale. Poor Ben has to live in the misery of what he’s done for the rest of his life. In playing that scene, I felt that Ben still had a lot of love for Vivien. But they were just stuck, and that’s hell, being stuck like that forever — and having to masturbate and cry every day.

What was your favorite part about returning to Murder House? Drop a comment with your thoughts below.