Is Supergirl stirring a super rivalry? What surprising alliance will form on Manifest? Which #OneChicago character’s “punk” roots will be exposed? Are Arrow‘s Felicity and Diggle on the same page? Read on for answers to those questions plus teases from other shows!

In Season 3B, there was a bit of a rocky storyline between Supergirl and Lena. In Season 4, will they be able to repair that and continue to work together? —Victoria
“Their arc and their story as friends is a slow burn…,” Melissa Benoist told us at The CW’s Fall Launch event. “I can’t say where I think/I know it’s headed, but… it’s a Lex Luthor and a Superman story.” Benoist promised that we’ll still see lighter moments ‘tween her and Katie McGrath (“Kara and Lena are the best of friends”), though “a secret identity in the midst is not exactly a good ingredient for a friendship with a Luthor!” she notes with a laugh.

On Arrow, what can you share about Diggle and Felicity’s interactions while Oliver is in prison? –Jennifer
“In the second episode, we’ll see how they’re working together, because obviously they both want to see Diaz behind bars,” showrunner Beth Schwartz answered when we hand-delivered your Q. “But there’s definite tension, for sure — with everyone,” Dinah, Curtis and Rene included. “Some people want to go back to how it was, and some people have moved on. So that will be the challenge at the beginning of the season.” 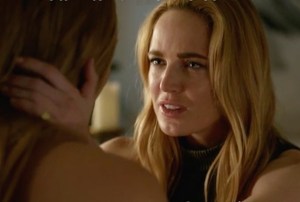 Any news on the upcoming premiere of Legends of Tomorrow? Specifically regarding Avalance? –Stefanie
The forecast calls for an avalanche of Avalance goodness.

Who/what will be the villain this season on Legends of Tomorrow? –Kevin
As the wackadoodle new trailer suggests, pissy fairy godmothers and murderous unicorns are among the magical mischief-makers Sara & Co. will face on a weekly basis. But when it comes to the Big Bad, “It’s complicated. Because it changes,” co-showrunner Keto Shimizu told us at The CW’s Fall Launch event. “I don’t know if I can say it specifically without giving it away. But I will say it’s sort of ‘humanity’s own failings.'” (Being The CW, you can trust that Humanity’s Failings will be played by someone young and attractive.)

I want to know everything about Manifest! —Kristi
Would you settle for something? Because show boss Jeff Rake told me that on or around Episode 8, “We’re going to discover an important alliance, unlikely as it is, between [NSA Agent] Vance and Ben, as they both come to discover that things are going on that neither of them know about.”

What’s next for Chicago Fire‘s Stella? —Rachel
This Wednesday’s episode delves into Stella Kidd’s past. “There’s going to be someone from her high school days who’s going to show up at the firehouse and tell us a few more things about Stella,” showrunner Derek Haas previews. What did Miranda Rae Mayo learn about her character in the process? “I found that back in the day, she was a bit of a punk,” the actress shares. “She was a bit of a troublemaker, had purple hair at prom, so that’s fun. Looking at who she is, who she’s become and the Stella that we know today, all of that makes perfect sense.”

Will we see any former Grey’s Anatomy series regulars returning in guest appearances in Season 15? —Eduardo
Funny you should ask. An upcoming episode will pay tribute to a number of deceased characters, although, sadly, it will do so without the assistance of their portrayers. The Nov. 1 installment finds the docs of Grey Sloan “remembering loved ones they lost” when a patient whose family is celebrating Day of the Dead is admitted, per the outing’s official logline. A Grey’s source, however, tells us the episode will not include any new footage of “dearly departed” T.R. Knight (who played George), Chyler Leigh (Lexie) or Eric Dane (Mark). 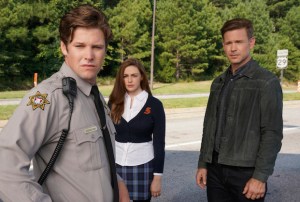 So excited about Legacies, are there any shout-outs or Easter eggs in the pilot episode? —PaperCarta
TVLine’s Andy Swift reports that while the pilot establishes Legacies as an entity all its own, the first episode is absolutely peppered with nods to both The Vampire Diaries and The Originals, some more subtle than others. In addition to a pivotal cameo from TVD‘s Matt Donovan (played by Zach Roerig), longtime fans will pick up on familiar names, stories and even spells.

Any news yet on Salvation? —Sharon
I’m hearing that a decision on Season 3 might not be made until the end of the month.

I’m “all in” for the Conners spinoff. Any scoop? –Craig
CBS’ Living Biblically didn’t make it to a second season, but the comedy will enjoy a mini-revival of sorts when in The Conners‘ second episode, Lindsey Kraft plays a character who crosses paths with both Sara Gilbert’s Darlene and Johnny Galecki’s David. (If I may connect the dots: Gilbert co-starred with Kraft in Living Biblically, while Galecki was one of the short-lived sitcom’s EPs.)

Anything new on Hawaii Five-0? –Ellie
‘Member when we told you that Ian Anthony Dale won’t make his Season 9 debut until Nov. 2? Well, when he does show up, I’m hearing that viewers will “see an Adam like they never have before” — until, that is, Danny intervenes. 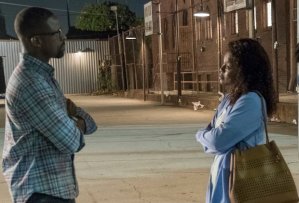 Any scoop on This Is Us? —Rebecca
We were wondering just how heavily American Gods‘ Yetide Badaki will recur as the late William’s neighbor Chi Chi on this season of the NBC juggernaut, so we asked. “I can say that I have a couple more episodes to shoot,” the actress shared earlier this month.

Now that the bunker on Supernatural is running like a well-oiled machine, Sam is in Dean’s position as the leader and everyone has formed a tight family unit, what is Dean’s role? How does Dean fit in? —Adder
“I think Dean is really proud that Sam could step up and not just be the kid brother,” executive producer Eugenie Ross-Leming says. “It’s sort of the fulfillment of some of Dean’s goals, so it’s not a bad thing. And they level off. They resume a relationship that they’re comfortable with.”

Can I get any scoop about Chicago P.D.? —Carlynn
Showrunner Rick Eid plans to shed light on Hailey’s background with what is “a really, hopefully, powerful episode that explores that exact issue.” 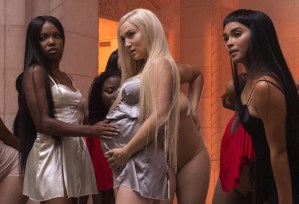 Anything on the new season of Star? —Liam
Showrunner Karin Gist tells the Inside Line that Season 3 of the Fox drama “is all about what it’s like after our characters get a little taste of success. How do they manage this new fame when their personal lives are all taking unexpected twists and turns? There’s more sex, more drama and more music as they fight to stay together while feeling the pull to strike out on their own. Meanwhile, Carlotta’s personal struggles with Jahil’s death take her on an emotional journey that reveals her deepest secret….” (Personally, all I heard was “more sex.”)

Are there any details about the 100th episode of The Flash, and when that cast party might happen? —Jen
We tried again to crack the 100th-episode nut, but Candice Patton was the very best soldier, holding her cards close to the vest. After reminding that costar Tom Cavanagh fittingly directed the milestone hour, she said, “For fans, it’s special in the sense that it kind of really revisits what makes our show special.” As for any Easter eggs that eagle-eyed viewers might collect, “There’s a lot of good stuff that I wish I could say to you right now that’s happening… but I can’t, unfortunately,” Patton deferred. “But there are a lot of special things happening in that episode.” And regarding the party, all you need to know is that TVLine will be there with Wells, er bells, on.

Do you have any spoilers for Chicago Med‘s Will and Natalie? –Allyson
The recent drama in Will’s personal life, and the secret he must keep as a result, “really drives a wedge between [him and Natalie],” star Torrey DeVitto previews. The storyline also finds the doc “butting heads quite a bit” with his brother Jay, who is “basically going to be like an honorary Med character this season,” actor Nick Gehlfuss says. “He’s coming over quite a bit.”

Real questions from real human beings get real answers! If you need the Inside Line on a favorite show, email InsideLine@tvline.com! (With reporting by Vlada Gelman and Kim Roots)