The Rookie reported for duty this Tuesday night, positioning Castle‘s Nathan Fillion as the titular 40-year-old flatfoot. Did the new ABC procedural cop your attention?

Fillion stars as John Nolan, a college dropout/longtime construction worker who one year after his marriage cratered, and in the wake of bravely busting up a bank holdup, enrolls in the police academy. Nine months later, The Rookie is born and dropped on the LAPD’s doorstep, where he is met by much derision — the most damning of which comes from Sergeant Wade Grey (played by Richard T. Jones).

The other “boots” in Nolan’s class include Jackson West (Titus Makin), who as the son of an IA commander has the “legacy” thing going for him, and Lucy Chen (Melissa O’Neil), a “hot shot” who happened to collar a carjacker on her way into work. 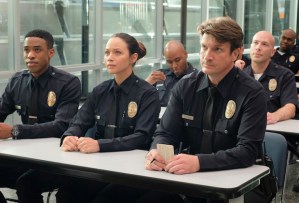 Nolan, West and Chen and paired with TOs Bishop, Lopez and Bradford (Afton Williamson, Alyssa Diaz and Eric Winter). During their first day, the boots deal with domestic violence (ultimately gone very wrong), sex-craved trespassers and casual racism (doled out by Bradford — but was it just a test?). The mid-hour climax involves the search for a kid left in a hot car by his addled dad, but Nolan and Bishop track down the tyke just in time. Afterwards, the boots go for beers, where Chen marvels at Nolan’s indifference to a flirty waitress. But as we soon discover, Nolan and Chen have actually had a thing going for two months, keeping it on the down low at his improbably lavish rental property.

In the second half, the precinct is tracking a BOLO when we meet Bradford’s wife (Mircea Monroe), a drug addict he hadn’t seen in a year. When the BOLO is found, Chen and Bradford arrive first on the scene, and gunfire is traded. Nolan and Bishop then arrive, forcing one of the accomplices to crash his getaway car. Nolan leaves Bishop to cuff that perp, while he rushes ahead to help out Chen and a wounded Bradford. Nolan winds up in a guns-drawn standoff with the BOLO, using a bit of psychobabble to make the cretin lower his guard enough for Nolan to put a bullet in his leg.

Back at the cop shop, Grey chews out Nolan for leaving Bishop by herself, where she just barely avoided assault by the crashed perp. Grey tells Nolan he’s done at the LAPD — only to later be advised to rethink that call by Captain Anderson (Mercedes Masohn), who sees value in the older rookie and as such offered him a job after other precincts firmly declined. In the parking garage, Chen is approached by Bishop, who strongly counsels her to call it her thing with Nolan lest it “brand you.” Nolan meanwhile runs into Grey, admitting to some of the sergeant’s preconceptions but nonetheless stating his case: “I earned my place here, and I’m not leaving.”

What did you think of The Rookie? Will you keep watching?