“Black Jesus Blues,” the second chapter of Black Lightning‘s new arc, has enough content to make the “Book of Consequences” a bestseller: a girl on the run, an unexpected houseguest, sister time, a reminder that dead men tell no tales, and a sad but hopeful transition.

Girl, Interrupted
A boy in one of the pods literally awakens with a jolt, killing himself and one of the lab workers — and opening another pod in the process. A disoriented girl walks out, but once she feels cornered she breaks through a brick wall (!) before she can be calmed down. Lynn fills in Jefferson, who then gets more details from Gambi: The girl’s name is Wendy Hernandez and she was a high school grad on track for nursing school before being scouted for the Freeland Experiment. She now has the power of aerokinesis and can control wind the way Jefferson can control electricity. (Wendy. Wind-y. A little on-the-nose, but whatever.)

Wendy wreaks havoc on the streets of Freeland with enough wind around her to make Beyoncé proud. She leaves before Black Lightning and Thunder arrive to clean up the mess. When people in the area cheer them on, Anissa takes a bow. Her father sternly reminds her they aren’t superheroes for the recognition. (Between Anissa’s grandstanding and playing Robin Hood with drug money, it’s clear that she’s is feeling herself a little too much.)

Later in the episode, Gambi locates Wendy, and after she hurls Black Lightning against a car, he subdues her with a zap. He tell her he’s a friend who wants to help and gets her back to the lab where she returns to her pod.

In Pod We Trust
Remember Issa Williams, the boy killed by police who came back to life last week? Well, creepy ASA Agent Odell gives the “bodybag boy” to Lynn so he can be analyzed. Issa can’t be out on the street, and his family is scared of him, so Lynn becomes his caretaker. While he’s under observation, his girlfriend Tiffany comes to visit. After he looks at her, she has a sudden outburst expressing her fear and disgust with him. Lynn doesn’t have the heart to leave Issa alone, so she brings him to family dinner.

The other Pierces are shocked to see him in their home, but get more comfortable once they’re at the table — so comfortable that they start speaking their minds. Jefferson notices Issa’s glowing jugular vein, and the boy admits that when he looks at people it makes them tell the truth. The family quickly leaves the table before any more secrets spill out.

Lynn puts Issa back under observation and gives him his lab results: He has the meta gene, but since it was formed artificially from Green Light, his cells won’t restabilize and will eventually break down. His only choices are death, or being contained in a pod. Lynn assures him that she’s working on a cure, but he decides to reunite with his loved ones in the meantime.

Checkmate
Tobias plays a game of chess with Khalil, but berates him for leaving Syonide vulnerable and thus (very) inadvertently causing her death. He slaps the boy into submission, and coldly reminds him that actions have (yep) consequences before winning the match. Later, Tobias visits Marcellus, his former right hand man, who taught him how to play chess all those years ago. Tobias talks about his plan to become the biggest arms dealer on the planet, and after they reminisce about killing Alvin Pierce, Marcellus realizes that his old boss isn’t there for pleasantries. Tobias kills him and kills Detective Sommers, another “friend” who gave him an evidence envelope from the Freeland Police Department. 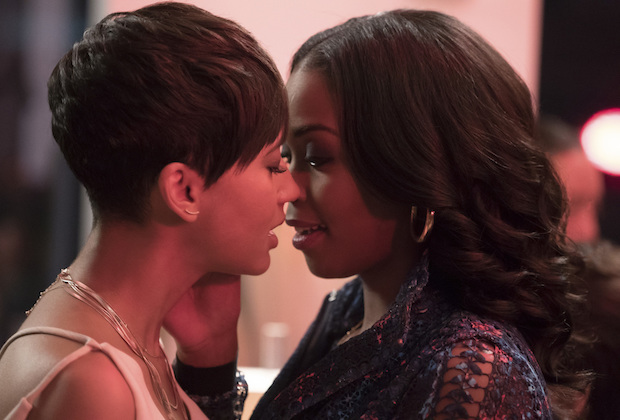 Sister, Sister
Jennifer and Anissa have sister time, which is undoubtedly the sweetest moment of the episode. They talk openly about their powers, including the pros (no more menstrual cramps!) and possible cons (infertility?) They also talk about their parents’ reunion, and about how complicated relationships can be. “You need to get back out there before you dry up,” Jennifer says to her sister (and anyone else out there in TV land who needs that advice).

Anissa listens to her sister and goes out to a sexy lounge where she boldly makes a move on the attractive singer who performed. She ends up spending the night with her, and even comes back the following night where she has an awkward encounter with her onetime flame, Grace Choi, who brushes her off. Yikes.

Speaking of exes, Khalil shows up outside Jennifer’s bedroom window like the old days (you know, before he became a murderous, dart-shooting psycho). She’s angry at him, but he tells her he’s indebted to Tobias for giving him the ability to walk again, so he had to attack the school and Black Lightning. He tells her he still has feelings for her, and when he touches her she has a power surge and makes him leave.

Down, But Not Out
Jefferson and Dr. Napier Frank meet to discuss the new principal of Garfield High. Napier tells Jefferson that he has to show everyone he’s 100-percent on board with the change, even if it involves a white man becoming the principal of a predominantly black school. (The school board wants to avoid the backlash that will come if parents and students think Jefferson is not in agreement with the decision.) At an assembly, Jeff gives the students the news, but tells them he will remain at the school as a teacher and will support the new hire. “Thank you for always teaching me,” he says.

The students recite the mantra that he has repeated to them on many occasions, but this time he is on the receiving end, and he tells them that he is going to live his life “by any means necessary.”