‘Tis the season for TV witches: From Charmed to American Horror Story, a veritable coven of spell casters is invading the small screen just in time for Halloween. But it’s hard to imagine any of them finding a way to top Netflix’s long-awaited Chilling Adventures of Sabrina. A vividly imagined and surprisingly playful blend of Gothic horror and pitch-black comedy, this new Sabrina (debuting Friday, Oct. 26) fully embraces the campy pulpiness of its source material, and might be the most purely fun new series of the fall. 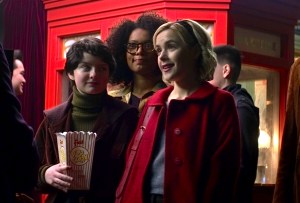 In the idyllic town of Greendale, “where it always feels like Halloween,” we meet teen witch Sabrina Spellman (Kiernan Shipka), the kind of girl who giggles her way through a screening of Night of the Living Dead. She’s half witch, half human, and hopelessly torn between two worlds as her pivotal 16th birthday approaches. Will she remain in the world of humans — and stay with Harvey (Ross Lynch), her sweetly dopey boyfriend — or will she embrace her witchy side by undergoing a ceremonial “dark baptism”? It’s your typical teen coming-of-age story… with one hell of a supernatural twist.

Sabrina hails from Riverdale creator Roberto Aguirre-Sacasa, and here, he gets to indulge in the kind of weird genre flourishes that Riverdale can only flirt with. (Like Riverdale, Sabrina takes place in a retro-tinged alternate universe where cell phones and malt shops somehow coexist.) Thankfully, Sabrina is more tongue-in-cheek and self-aware than Riverdale is ever allowed to be; the Riverdale teens never seem to recognize how ridiculous their circumstances are. Sabrina‘s characters rattle off arcane witchcraft lore with ease, but never take it too seriously, sporting a macabre sense of humor reminiscent of the Addams Family films. 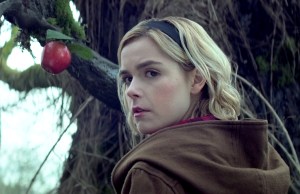 It doesn’t skimp on the scares, either. In the three episodes I’ve seen, Sabrina delivers a number of truly terrifying horror sequences. (Chilling is an apt word to use in the title, actually; you might find yourself shivering at times.) The gorgeous, dreamlike cinematography amplifies the vibe of otherworldly dread — shout-out to director Lee Toland Krieger, who helmed some of Riverdale‘s most evocative episodes — and the production design is a triumph of skin-crawling creepiness. (I love Sabrina’s house, a vast Gothic mansion deep in the foggy woods, with gnarled tree branches creeping up the walls inside.) It might actually have been a lucky break that this moved from The CW to Netflix; I’m not sure The CW would have allowed its Sabrina to be this dark, or this strange.

Sabrina is also very lucky to have landed Kiernan Shipka as its leading lady. She learned from the best at an early age as Mad Men‘s Sally Draper, and at just 18 years old now, she’s developed into an impressive young actress. The role of Sabrina calls for comedy, drama, romance and horror, and Shipka adeptly handles them all without missing a beat. She finds a way to wink at all the absurdity here, and yet fully buys into it at the same time — so we buy into it, too. (Another plus: She still looks like a kid, while Riverdale‘s “teens” seem more like they’re pushing 30.) 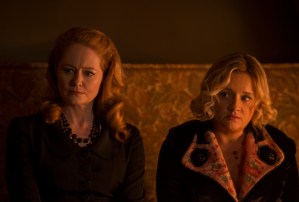 She’s backed up by a strong supporting cast as well. Miranda Otto and Lucy Davis have a lot of fun as Sabrina’s aunts Zelda and Hilda, who run a family mortuary, of course. (It’s not a spoiler to tell you that one aunt eventually kills the other; the dead aunt crawls out of the grave soon after, good as new.) Chance Perdomo is charming as Sabrina’s cool cousin/BFF Ambrose, a pansexual witch who’s a whiz on the laptop. And Doctor Who alum Michelle Gomez steals scenes left and right as Sabrina’s favorite teacher Miss Wardell, who, after being possessed by a malevolent spirit, transforms from a mousy old maid into a sultry vamp.

Sabrina is still working on finding the ideal balance between gruesome horror and soapy teen drama, and occasionally wobbles a bit in the process. (If anything, the scale tips too far towards horror at times. This is the first show I can remember that presents Satanism as a valid lifestyle choice.) But when it’s clicking on all cylinders, its intoxicating mix of supernatural thrills and deadpan one-liners approaches the heights of Buffy the Vampire Slayer… and I realize that’s high praise indeed. It’s probably too much to hope that Sabrina ultimately delivers even half the joys that Buffy did — but it’s off to a bewitchingly great start.