Monday’s Arrow season premiere went back to the beginning — and to the future! Through a series of flash-forwards, viewers were introduced to Oliver’s now-adult son William (played by Chasing Life‘s Ben Lewis) as he arrived on Lian Yu. While traversing the island where his dad was stranded for so many years, William got caught in a trap. After his captor arrived, William exclaimed, “You knew my father!” The mystery figure then took off his hood, revealing himself to be… an older Roy Harper!

“When you’re on a show for so long, the challenges are trying to tell new stories with your characters,” showrunner Beth Schwartz explains. But the new timeline, which picks up 20 years after the present day, has “just opened up a huge world for us, and the creativity just poured in. Now the stories are endless.”

While the future glimpses won’t be included in every episode, they will be present “a lot,” and “all season and series,” reveals Schwartz, who is mum on details about the twist. As for whether other familiar names will appear in the future, either played by series regulars or guest stars, Schwartz would only say, “We’re going to see some of our characters,” and dig deeper into how the past affects the future.

“Part of what made this series so successful in having the flashbacks is that you were able to really get into your characters,” Schwartz shares. “Especially with Oliver, you knew how he became the way he is. And now with the flash-forwards, you’re able to see what is happening in the present day, [and] how that affects the characters in the future.” 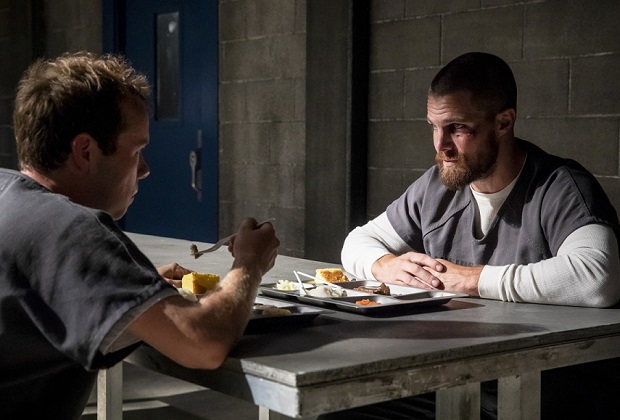 Speaking of the present, the season premiere found Oliver trying to keep his head down in prison to mixed results. After Diaz’s inside men attacked him — and his wife Felicity and son William on the outside — Oliver chose to fight back quite brutally. (We’ll never look at The Count of Monte Cristo the same way again.) As much as the other guy had it coming, the violent incident extended Oliver’s stay behind bars, keeping him away from his loved ones.

“I love the prison story. It’s one of my favorite things this season, because it’s just so different from anything we’ve done before,” Schwartz describes. “It allows [Oliver] to be with other people. We wanted to keep him separate, because the reality of when you’re in prison [is] you’re not with your family. So his storylines are with the characters in the prison,” and in particular, wrongly convicted inmate Stanley (Gracepoint‘s Brendan Fletcher).

“The reason I love their relationship so much is because, first of all, they are opposites,” Schwartz says of the oddball dynamic. “He’s kind of the voice of the hope of the city, who believed in [the Green Arrow], because he’s the Green Arrow’s biggest fan. So he’s kind of a little bit of the light for Oliver in prison.”

Elsewhere in the episode, Felicity told Oliver that she was done hiding from Diaz, and opted not to go into Witness Protection again. (Don’t worry, William is headed to boarding school.) And although the husband and wife are separated by their circumstances, they’re “fighting for the same thing,” which is their family, Schwartz notes. “So even though we don’t physically see them together, their goals are the same. So they connect without physically connecting, which I think is really cool. You don’t need to see them together to get that connection.”

Finally, there’s the premiere’s other big mystery: Who is the new Green Arrow crossing names off a list? “We’ll definitely unveil and explore [that] before the end of the season,” Schwartz promises, adding that Dinah and Rene will continue to be “on different sides” of the “New Green Arrow: Friend or Foe?” debate.

Arrow fans, what did you think of the season opener? Grade it via the poll below, then hit the comments!