Those sampling the premiere of DC Universe’s Titans heard the Boy Wonder’s salty answer to that inquiry from a street tough, and in doing so got a taste for this superhero series’ decidedly mature tone.

“It is a big line,” exec producer and former DC Entertainment bigwig Geoff Johns affirmed for TVLine on the world premiere’s red carpet. “But when you watch the pilot, you understand the context.”

When asked who needed to sign off on Robin’s expletive-laced dis of the Dark Knight, Titans showrunner Greg Walker chuckled, “Who didn’t!” He then related, “Once it was come up with, we were all so excited about that idea – not because we get to say the F-word, but because it so encapsulated Dick/Robin’s struggle in that moment,” having been dismissed as a “birdie flying solo” before giving no fewer than 10 men a nasty beatdown.

Secondly, Walker noted that the nascent DC Universe streaming service “is a premium, pay platform, and the content you go to pay for has got to be something you’re not going to see on free TV — content-wise, in terms of how it looks, and in terms of how people talk.”

To that end, might Titans show some skin as well (beyond the bit of beefcake Hank “Hawk” Hall serves up in Episode 2? “If it’s revealing of character, for sure,” says Walker, “just the way that violence is on our show.” 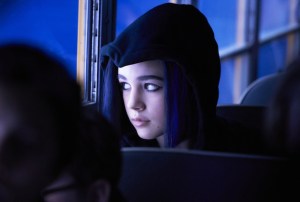 The “F–k Batman” moment came early in the series’ first episode, well before Detroit PD detective Dick Grayson found himself sitting in an interrogation room across from Rachel Roth, a young woman who had just lobbed a brick at a police cruiser so as to get away from a shelter volunteer who seemed to wish her harm. “You’re the boy from the circus,” Rachel said, having previously had visions of Dick watching her acrobat parents plummet to their deaths. “Everything led me here, to you. It can’t be by accident,” the lass contended. She then unsuccessfully begged to be locked up, attesting, “There’s something inside of me, something evil.”

Dick disregarded the odd request, and Rachel as a result was led away by a dirty cop who was doing the bidding of the man who had earlier killed her alcoholic “mother.” Mumbling something about Rachel representing a “doorway” for something heinous to pass through, the man started to perform a mystical ritual, but was distracted by Dick’s arrival at his hideout. Rachel’s “other self” — a Ring-like demon — then attacked her captor, materializing and entering his body, leaving him to die a ghastly, retching death. Afterward, Dick agreed to help Rachel, driving her away in a snazzy “family heirloom” (more on that in a later episode).

“My mom says there’s no such thing a monsters,” Rachel says/warns as they drive off into the dark night. “I think she was wrong.” 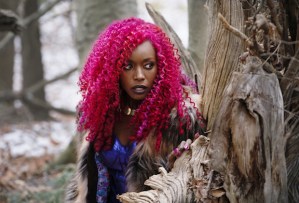 The other half of the series premiere picked up with “Kory Anders” coming to in the wake of a car crash that killed the driver, outside of Vienna. Escaping into the woods as goons descend on her, the amnesic Kory sneaks off into a rest room, where she takes stock of the contents of her purse — a passport noting her alleged name; a locker key; and a hotel room access card. Kory arrives and said hotel and makes her way to her room occupying the entire top floor. There she finds a man tied to the bed, but not for any fun reason.

“The girl you’re after, we can find her,” he proclaims, for naught. Instead, Kory is more curious about the man whose picture is on her phone. When he is eventually ID’d as Konstantin Kovar, Kory goes to the club operated by her prey. And Konnie ain’t happy to see the woman who apparently was once in his bed. “You betrayed me, because of this girl?” he growls, gesturing at a photo of Rachel Roth. When Kory nearly laughs at the idea that she loved this man, Konstanin fires a bullet at her. Except that before impact, it ignites… something… in its target, whose body begins to glow with and quickly expunge fire. Having turned Konstanin and his henchmen into briquettes, Kory snatches the pic of the girl, Rachel, and heads off.

In the premiere’s very final sequence, the night watchman at an electronics store is roused by noises from the stock room. Breaking away from his retro videogame to investigate, he is startled by the discovery of a green tiger. The animal means no harm, and instead trots outside, into the woods, where it transforms into… a teenage boy.