Will a self-imposed prison sentence solve all of Rebecca Bunch’s problems? Crazy Ex-Girlfriend returns for its final season to tell us: Yeah, probably not. 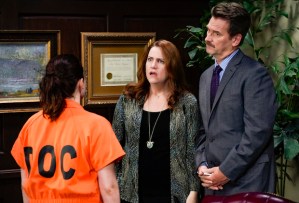 Friday’s Season 4 premiere picks up where we left off, with Rebecca pleading guilty to attempted second-degree murder for shoving Trent off that ledge. In the judge’s chambers, Rebecca is represented by Paula and Darryl, since Nathaniel angrily ditched her following her plea. (“Full disclosure,” Darryl warns. “I specialize in real estate law.”) The judge says she doesn’t accept Rebecca’s plea, which was really “more of a speech filled with irrelevant details,” but Rebecca insists she needs “to do penance” for “all of my past crimes, both real and metaphorical.” Fed up, the judge sends her to county jail for six weeks, and as Rebecca is put behind bars, she mutters to herself, “I deserve this” — even when she’s forced to squat naked and cough during a contraband search.

Nathaniel and Josh aren’t reacting so well to Rebecca’s plea, either. Nathaniel signs up for an “intense outdoor survivalist excursion” that throws him out in the woods to fend for himself, in an effort to forget about Rebecca. His loyal flunky George won’t let him starve out there, though, so he parks himself nearby in a luxury tent with plenty of bratwurst and ska music, just in case. Meanwhile, Josh can’t believe he didn’t see all the red flags with Rebecca, and instead of recognizing that he’s self-involved and kind of dim, he insists he must have his own mental disorder and takes a bunch of online quizzes to diagnose himself with “ADHD, OCD and synesthesia.” (When he thinks about the number five, he sees the color blue and smells daisies.) 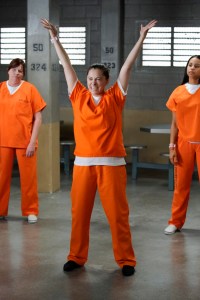 Rebecca soon figures out that prison isn’t the rewarding journey of self-discovery she thought it’d be, and falls into a pit of regret and despair. She perks up, though, when she joins her cellmates for a round of theater games, quickly taking over the group and forcing them to participate in a South Pacific sing-along. Her fellow prisoners don’t like South Pacific — or her — very much, so Rebecca launches into the Chicago-esque vamp number “What’s Your Story?” to give them all a chance to explain how they ended up in jail. But their stories are all crushingly sad and lack a dramatic arc, so she tells her own… and when the others find out she’s in jail by choice, they shut her out completely.

Paula visits with good news: Trent woke up from his coma and confessed to everything, so Rebecca can leave jail tomorrow. But Rebecca doesn’t want to just waltz out of there, now that the other prisoners have shown her how “privileged” she is. Feeling misunderstood and alone, she sings “No One Else Is Singing My Song” — with an equally lost Nathaniel and Josh singing along in three-part harmony. Eventually, all three of them come to their senses: Nathaniel sneaks into George’s tent to stay warm, Josh seeks out an actual therapist (Dr. Akopian’s husband!) and Rebecca walks out of prison, with her girl group there to greet her.

At her welcome-home party, she’s still complaining about her privilege, until Valencia points out that she should actually use that privilege to help others instead of just whining about it. Nathaniel shows up, and he and Rebecca have a warm reunion where they both say they love each other — but when she turns down his offer to fly to Hawaii to work on her issues, he lashes out at her: “Every time we’re happy, you try to ruin it.” After he storms off, Rebecca realizes her path forward lies “somewhere between jail and Hawaii,” and returns to the prison… this time as an attorney, offering the inmates free legal advice. They’re happy to have her back — as long as she doesn’t sing.

How’d you like the Crazy Ex premiere? Give it a grade in our poll, and drop your post-premiere thoughts in a comment below.