I’ve got some bad news for Blindspot fans who were hoping Jane’s evil turn as Remi would be short-lived.

As evidenced by Friday’s Season 4 premiere, it seems Remi will be sticking around for a while — but when it comes to her nefarious plan to take down the FBI team, she’s working on borrowed time.

The premiere picks up three months after last May’s finale, and Jane — who I’m just going to keep calling Jane, because consistency! — is working with the FBI to procure one of several data caches that Roman left behind when he died. As you might recall, the hard drives allegedly contain helpful information about ZIP poisoning, which Jane desperately needs to cure before it harms her even more.

After a badass showdown with a Japanese crime boss (there was even a katana fight!), Jane and the team do get their hands on Roman’s latest drive. But the satisfaction of a mission accomplished is short-lived, particularly for Jane. After the team’s trip to Tokyo, Patterson informs Jane that the ZIP poisoning dosage she received has never fully left her system, and it’s slowly killing her. Jane is skeptical at first, insisting that Roman and Shepherd would never have drugged her with something fatal, but Patterson counters that her family likely didn’t know how strong the poison was. If the team can’t find a cure in time, the ZIP poisoning will eventually reach Jane’s brain stem, and her body will essentially forget how to function.

Patterson tries to find a silver lining to Jane’s terminal diagnosis: At least Jane isn’t experiencing advanced symptoms yet, right? Like hallucinations, right? But unbeknownst to the team, Jane is starting to see someone that isn’t there: Roman. She tells her brother — er, her “brother” — that she plans to stick with the FBI team, no matter how much she hates its members, until they find all of Roman’s data and get a cure for the poison. But Roman’s outlook is a bit less optimistic: “You really think that can work? I mean, if I had all the answers, don’t you think I would have cured myself?”

Meanwhile, Jane has another major concern on her mind: She needs to get in touch with someone, anyone, from Sandstorm in order to rebuild the organization and more easily take down the FBI. She eventually gets in contact with the last remaining Sandstorm operative, a man named Dolan Osmond. After earning Dolan’s trust by preventing the FBI from capturing him, Jane convinces Dolan that they should rob a bank in order to get the money needed to hire mercenaries — and, thanks to Jane’s tattoos, she knows just the bank they should target.

But Jane and Dolan’s plan goes awry in the end. Though Jane does manage to steal stacks of cash from the bank’s vault — a feat she accomplishes by joining the FBI on their mission to close the bank — Dolan dies after Reade runs him off the road during a car chase. “Make them pay, Remi,” Dolan urges Jane before he passes away. “Promise me. Make them pay for all of…” And with that, he takes his last breath.

Oh, and it gets worse for Jane after that. Though she tries to convince the FBI that Sandstorm has officially been conquered now that Dolan is dead, Patterson informs her that there’s one more Sandstorm contact they need to locate. Whomever Dolan was communicating with is obviously involved in Sandstorm, too, and the mystery person is now the FBI’s most wanted criminal. And that’s Jane. Awkward.

But before the premiere is over, Roman — well, Jane’s hallucination of him — is able to get Jane’s mind back on happier ideas. Like, say, ruining Kurt Weller’s life. After confessing to Roman that she absolutely hates Weller (and hates having to kiss him), Roman cheers her up with this promise: “We are going to break our mother out of that black site. We’re going to find a cure for you. And then we’re going to kill Kurt Weller.” And at the mention of that plan, Jane shoots Roman a big ol’ grin. 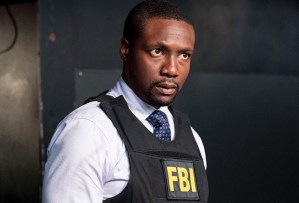 * Former congressman Matthew Weitz (returning guest star Aaron Abrams) is tapped to be the new FBI director, much to the chagrin of just about everyone. Because he’s the worst.

* Patterson and Rich Dotcom have apparently stumbled upon some files that could lead to a potential cure for Jane’s ZIP poisoning. Rich is desperate to tell Weller the news, as he thinks Jane’s husband deserves to know there’s some hope. Patterson, on the other hand, thinks it’s way too soon to get Weller’s hopes up, and she refuses to pass along the intel until she and Rich know more.

Oh, and that mystery person who Roman called before he died in last spring’s finale? Didn’t actually exist. He or she was merely a hallucination that Roman experienced as a result of the ZIP poisoning.

* Zapata bluntly informs her new partner in crime, Blake Crawford, that certain HCI Global shareholders don’t believe in Blake’s ability to take over as the company’s CEO. In order to convince them that she’s right for the job, Blake gathers a meeting with the shareholders who lack faith in her and gives an impassioned speech about her determination to carry on her father’s legacy.

But when one of the shareholders, Madeline Burke (played by recurring guest star Mary Elizabeth Mastrantonio), raises a toast to Blake and her new position at HCI, everyone in the room who drinks the champagne — including Blake! — is poisoned and dies within seconds. Madeline then turns her attention to Zapata, revealing that Zapata has been part of her long-term plan (whatever that might be) for quite a while. This all happens very quickly, but Zapata and Madeline agree to work together, and Zapata confirms that she would kill her former colleagues “without question” if she needed to… and that includes Agent Reade.

Your turn! How did you feel about Blindspot‘s Season 4 premiere? Grade the episode in our poll below, then hit the comments with your full review!