American Horror Story: Apocalypse‘s brewing battle of the hexes — sorry, sexes — reached new heights on Wednesday when Cordelia reluctantly agreed to administer the Seven Wonders test on Michael. But when her gamble proved too successful, dark secrets about the would-be first male Supreme began to surface, setting the stage for the actual apocalypse.

Following a disturbing vision of the future — complete with flesh-eating zombies and a white-faced demon — Cordelia feared that her arrogance, her unwillingness to believe that a man is capable of Supremacy, would make that vision a reality. The viewers, of course, knew this to be nonsense, as did John Henry, who made tracks to New Orleans to warn the witches of his concerns. Unfortunately, he “coincidentally” stopped at the same gas station as Ms. Mead, who sliced his Achilles tendons, gutted him like a pumpkin and set his damn corpse on fire. Classic Ms. Mead. 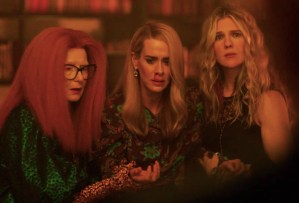 With no handsome warning from Cheyenne Jackson to stop her, Cordelia went through with the Seven Wonders trial, which Michael passed with flying colors. He even accepted Cordelia’s bonus challenge of bringing Misty back from her own personal hell — a never-ending cycle of her traumatic experience dissecting frogs in science class. Though she was grateful to have been brought back, Misty saw something in Michael that creeped her the eff out, a concern she share with Cordelia and Myrtle.

But was Misty’s warning, as the great philosopher JoJo Levesque might say, too little too late? After all, this whole episode was a pre-nuclear winter flashback, so we already know that the coven doesn’t stop the world from ending. Nevertheless, I’m excited about Cordelia sending Madison and Behold — yes, Billy Porter’s character is named Behold — to the Murder House, “where it all began.”

* Did anyone else’s ears perk up when it was announced that Michael’s test would be conducted under a “Blood Moon”? Was that merely a wink-nod to Roanoke, or the start of a larger connection?

* I was wondering how Apocalypse was going to work in Stevie Nicks, and I absolutely love the route they chose. Having the “White Witch” serenade Misty to help her reconnect with herself was brilliant. I got goosebumps the minute Nicks entered the room. (“Hello, witches.”)

* Just when I thought my obsession with Coco had reached its limit, we found out her foremost magical power is detecting gluten. She may think her ability “sucks ass,” but I couldn’t love it more. Meanwhile, Mallory can heal people’s wounds and turn them back into babies. (I mean, we only saw her do it on a deer, but humans are about the same size.)

Your thoughts on this week’s AHS: Apocalypse? Drop ’em in a comment below.