Do you have a Friday Night Lights-sized hole in your DVR? The O.C.-sized, perhaps? Maybe even 90210-sized?

The CW on Wednesday set out to fill all of those gaps with the debut of All American, its football-centric series that has echoes of multiple circa-2000s teen dramas. But did the first episode score enough points with you? Before you give us your thoughts on the premiere, let’s recap what went down in Episode 1:

The drama centers on Spencer James (played by Daniel Ezra, The Missing), a straight-A student at South Crenshaw High School who’s also a natural on the football field; not only can he make plays, but he has a knack for picking up on other players’ body language and identifying potential weak spots in an opponent.

Naturally, Spencer’s talents are very appealing to Billy Baker (Taye Diggs, Private Practice), the football coach at Beverly Hills’ uber-ritzy Beverly High. (They serve sushi on Fridays!) After watching Spencer win a game at South Crenshaw, Coach Baker invites the teen to instead play at Beverly High, where he can also get a better education at a safer school. The coach insists he isn’t technically recruiting Spencer — which would be against the rules and would cause Spencer to get benched for three months — and, after some prodding from his mother, Spencer agrees to transfer schools and join the Beverly High team. There’s only two conditions: Spencer will be attending on an academic permit, meaning he’ll have to maintain a strong GPA; and he can’t get into a single fight, which he’s had a habit of doing at South Crenshaw. 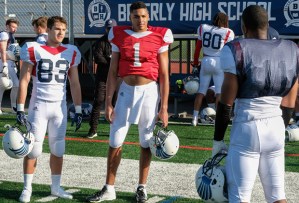 As you might expect, Spencer’s first week at the new school isn’t exactly awesome. His new teammates are a gaggle of privileged jerks — including Coach Baker’s son, Jordan, and the obnoxious, insensitive Asher — and Coach Baker changes Spencer’s football position to safety with zero heads-up. Sure, there are some bright spots, too. Spencer becomes fast friends with Coach Baker’s daughter, Olivia, who is fresh out of rehab for alcohol and drug use; and he hits it off with Beverly High’s queen bee, Leila, much to boyfriend Asher’s chagrin.

But when Jordan discovers that his father actually did recruit Spencer, because he doesn’t think anyone else on the Beverly High team has half of Spencer’s talent, he and Asher decide to sabotage Spencer by getting him drunk at a party… the night before he’s supposed to impress all of the school’s boosters, who fund the football team and keep Coach Baker employed. At the next day’s scrimmage, Spencer is too hungover to do his best work, and Jordan reveals to Spencer that Coach Baker only recruited him so he could get Beverly High a championship and keep his job.

It takes a lot of persuasion for Spencer to agree to stay at Beverly High after that, including a few heart-to-hearts with Coach Baker and his best South Crenshaw friend, Coop. But after confessing to Coach Baker that he’s angry at his father — who bailed on the family years ago — and that he wants to do better than his old man did, Spencer agrees to stay put at his new school, and he even makes the winning play at the next football game.

At the end of the premiere, Spencer is thrown one more curveball (er, sorry, wrong sport): In order for Coach Baker to get away with recruiting him, Spencer has to move to Beverly Hills and officially qualify for the Beverly High school district. He moves in with Coach Baker and his family — setting up a potential romance between him and Olivia along the way — and agrees to spend weekends at his old place with his mom and brother.

But Spencer’s mother, Grace, seems to have a secret of her own when it comes to Spencer’s rapidly changing football career. In the episode’s final moments, Coach Baker arrives at her doorstep, looking solemn. “Hey, Gracie. We need to talk,” Coach Baker tells her. “We’ve gotta tell Spencer the truth.”

With that, I hand it over to you. What did you think of All American‘s debut? Cast your votes in our polls below, then hit the comments with your reviews of the premiere!