The Flash with its Season 5 premiere introduced us (as well as Barry and Iris!) to grown-up Nora West-Allen — as well as revealed a dark truth the future speedster came bearing.

In Nora’s voiceover intro, we learn that she hails from 30 years into the future, where as the superhero “XS” (thanks for the nickname, Mom!) she is regarded as “the guardian of Central City” (James Olsen’s trademark lawsuit pending). There, she spends every day living up to the legacy of her dad, The Flash.

Alas, Nora reports to Team Flash, she made a “big mistake” in helping Dad destroy The Thinker’s satellite, because in doing so she somehow is no longer fast enough to travel back to her own time. Uncle Wally, quite logically, zips off to ask if Nora can hitch a ride on the Legends’ Waverider, while Barry frets over his not-too-little little girl spending too much time in, and possibly comprising, this timeline. (“She could Marty McFly herself our of existence,” he says in a reference to a movie that is not Terminator 2, sweet, pretty Iris.)

In the meantime, Barry resumes work as a CSI getting a hand from Nora, who studied forensics science at CCU. Their catch-up on case work is interrupted by the report of a meta attack. Barry’s costume is in tatters from the season finale, so Nora fetches his first edition super suit, “a total fan favorite.” Barry insists in battling the meta, Gridlock, by himself, and yet Nora shows up as XS and distracts him long enough to get KO’d, allowing the baddie to escape.

While Cisco explores tachyon-related ways to get Nora back to her time, and as Ralph “discovers” the multiverse theory, Iris takes Nora to Jitters in hopes of doing some bonding, seeing as she’s apparently a bit of a “daddy’s girl.” Following their awkward exchange of yes/no questions/answers (aimed to tiptoe around timeline-altering truths), they return to S.T.A.R. Labs where Wally races back with urgent news: The Legends have ID’d Nora as possessing “negative tachyons” in her system, and that’s what’s keeping her from tapping into the speed force. Worse, they also conveeeeniently prevent her from boarding the Waverider, lest she vaporizes the ship!

Iris meanwhile gets to wondering why Barry is in such a rush to send their daughter back from whence she came, especially since their connection seems to effortless. “Like, now you’re worried about the timeline?” she pretty much asks. Barry explains that for his whole, out-of-order life, he as well as his parents missed “firsts,” and he hoped that he and Iris could for once experience “one little thing” the normal way. Iris counters that they’ve been offered “something extra,” seeing as their daughter defied physics to hang with her ‘rents. Trés schway, indeed!

That comment sparks something in Barry, who up and runs off to see Nora. “What happens to me in the future?” he asks. Nora leads him to the time vault and the newspaper headline about The Flash going missing in 2024. Twenty-five years later, Nora reveals, he is still gone: “You never come back.” Nora goes on to explain that because she was born only a few years before his vanishing, she has no memories of her Dad. And that’s why she came to visit, starting with the wedding. And, truth be told, she isn’t “stuck” in time after all. But what Barry hears most in all of this is the sad truth that yes, he does miss all of wee Nora’s “firsts” as a result.

When a new Gridlock threat emerges, Barry — clad in a sleek and super-portable new suit styled in the future by Ryan Choi aka The Atom — teams with Nora and Wally to vibe on board an airplane, detain the meta and then, together, “phase” the descending airliner through downtown skyscrapers. Nora has never used her powers in this way, but Barry coaches her, channeling Season 1 “Wells.” So yes — a “first” for dad and daughter!

Afterward, Barry tells the team he has changed his mind about rushing Nora back to the future, that they should “make sure her powers are all working correctly” before trying. In the meantime, Nora will apparently crash in a cozy lounge section of S.T.A.R. Labs that only nap-loving Joe has known about all this time!

Reflecting on their little girl all grown up, Barry notes to Iris that Nora is fearless, just like her momma. “We made a person,” he marvels. To which Iris adds, “We get our happy ending” — unaware, of course, of the dire fate awaiting Barry just a few years into the future.  And on that note, Barry and Nora make an ice cream run to Rhode Island, as XS in voiceover declares her mission to stop her dad from disappearing.

*Cecile realized that she still has her mind reading powers.

*At episode’s end, Joe urges Wally to finish what he had set out to do when Rip Hunter barged in on his monastery retreat. 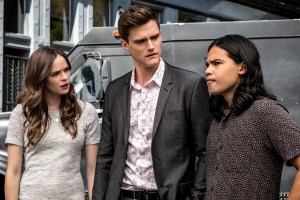 *Caitlin explained to Ralph that Killer Frost has been gone ever since DeVoe took over his body. She then talks about having new memories of her childhood that suggest an earlier origin for Killer Frost. The only person who might know more, though — her dad — has been dead for years. Or has he? At episode’s end, Ralph reveals that he has used his private dick skills to turn up Papa Snow’s fraudulent death certificate.

* Can’t forget about the Big Bad! Gridlock is being hauled away when the transfer truck is halted by a lightning bolt-shaped dagger spiked into the street. The guards are assaulted off-screen, before Cicada opens the back door and greets Gridlock, dagger in hand. “What do you want?” the meta asks. “For all of you to die,” Cicada answers.