The following contains massive spoilers from the Season 2 premiere of The CW’s Black Lightning.

The CW’s Black Lightning powered up its second season thus Tuesday night, and by the time the opening credits rolled, it was, “Sayonara, Syonide,” as Tobias’ favorite henchperson was bested in parking garage brawl with the suddenly formidable Ms. Fowdy.

“She’s dead,” series showrunner Salim Akil affirmed after a recent press screening of the premiere. And as a result, as seen during the episode’s closing sequence, Tobias is out for payback. Calling Syonide “the only thing left in this world I cared about,” he told Fowdy it was now “time to die.” And though he shot one of his trademark harpoons into the ASA spotter’s torso, she yanked herself free and then lobbed herself out the window — to safety…? Stay tuned. 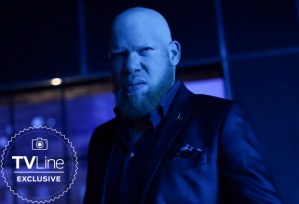 Addressing what exactly is next for Tobias, who still is in possession of that briefcase full of “hell,” Akil said, “Just wait! That’s a good question, but I can’t answer it,” other than to say that the highly elusive crime boss “is going to do a different type of hiding” in the short term.

Among the season opener’s other major developments:

INSPECTOR HENDERSON NOW KNOWS that Jefferson is Black Lightning, having put the final pieces together after Garfield High’s hands-on principal went oddly MIA after Tobias Whale and Painkiller’s season-ending invasion of the school. “He’s pissed,” says Akil, who wanted to deal with the perceived betrayal “from a real place.” During Season 1, Henderson’s POV on the resident vigilante was “kind of, ‘I like you. If I don’t, I’ll shoot you,'” Akil reminds. “And now that it’s his friend, he’s hurt, and I want to play those emotions.”

ANISSA HAS ADOPTED A NEW HEROIC PERSONA now that metas are persona non grata while her community needs help more than ever. Specifically, the church estimates that the cost of helping families sue for custody of their “green light babies” is north of $500K, so Anissa cloaked herself in a hoodie and used her powers to steal from the rich (drug peddlers) to help the poor. But that Robin Hood-like endeavor will have “consequences,” Akil says, echoing the theme of this season’s first arc. “She’s got to find that line” to tread. (As for what to call this pared-down version of Thunder, Akil says, “We haven’t come up with a name yet,” though the writers room readily dismissed the suggestion of “Girl in the Black Hood.” Whew.)

JENNIFER’S POWERS ARE MANIFESTING in new and unusual ways, finding her glowing and floating above her bed or curled up in the bathtub inside an electrical bubble that only her father can power down. And that’s when she isn’t accidentally zapping her doting mom! “We get into [Jennifer’s troubles] in depth,” Akil says, in part with the help of a therapist who possesses telepathic abilities (played by Living Single‘s Erika Alexander). “Last season, one of the questions [Jennifer] had was, ‘Can I have kids?’ This year, it’s, ‘If I have sex, will I hurt somebody because I can’t control my powers?'” The press’ “negative spin on metas” will also have Jennifer fretting, “Am I hunted? Am I a monster? What am I?’ says Akil. “It’s hard enough just being a young woman, then being a young black woman, and now having powers that everybody’s afraid of….? We’ll deal with it all.” (With reporting by Vlada Gelman)