It was one (literally) microscopic step forward for Manifest‘s mystery-solving team, and then a corpse-sized step back, as Episode 3 of the freshman NBC hit came to a close.

Just as medical researcher Saanvi revealed to Ben and Michaela that she and Cal possess a genetic marker that was not there before the fateful Flight 828 — one that suggested they all had suffered the equivalent “strokes” aboard the plane — the puzzle piece they needed to follow up on their theories went missing. The corpse of Kelly Taylor, the passenger who heeded a “calling” to go on TV and “own her truth,” has disappeared from the morgue and was last seen being lugged into a secret facility by comms-wearing, suit-and-tied government-looking types.

After moderating the Manifest panel at this weekend’s New York Comic Con, I invited showrunner Jeff Rake to break down the latest twists — including the reveal of Grace’s new-ish love. 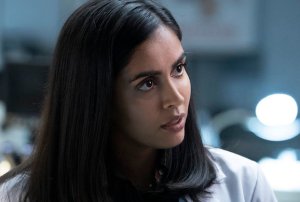 TVLINE | What are Ben, Michaela and Saanvi’s next steps in the wake of Kelly Taylor’s corpse being stolen?
When they figure out that this body is missing, it just fuels the fires of their suspicion, that the government is at the least going to be incredibly intrusive in their lives going forward, but at the most that there is greater government involvement. That stokes some conspiracy theories that will exist among the community of passengers going all the way through [Episode] 13. What we’ll come to discover is that while the government involvement is not exactly as they predict it will be, there is in fact subversive activity going on that will present an increasing threat to them.

TVLINE | Are we to assume those were NSA Special Agent Vance’s men stealing the body?
We’re led to believe that it is Vance’s people, but I’m not going to commit to that, because it may turn out to be far from the case. 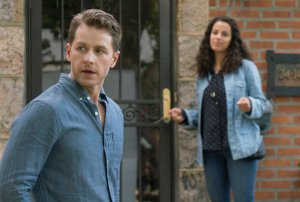 TVLINE | Despite Grace’s reassurances to Ben, is her boyfriend Danny (to be played by Graceland‘s Daniel Sunjata) not going to go away quietly?
Danny is not going to go away quietly — and why would he? As far as he is concerned, he has been in a legitimate relationship, he’s in love with someone who loves him…. This couple has been together for three years, and they’re a family unit. What I’ve always talked about in regards to these relationships is this is “infidelity without moral culpability.” Danny can’t be blamed for the current dilemma any more than anyone else can. Danny is going to feel that he has a legitimate claim to not only the woman he fell in love with, but also to the daughter he developed an important relationship with.

TVLINE | And an even five years, that might come across as too much an element of the larger mystery?
Maybe so. In the real world, when weird things happen, it rarely has to do with something that’s perfectly neat. There’s always something that’s a bit off about it. Five-and-a-half felt real to me, like something we can wrap our heads around and go, “Yeah that sounds right.”