Just as the city of Los Angeles is piecing itself back together after 9-1-1‘s three-part earthquake event, so too is Buck (played by Oliver Stark) doing some mending of his own.

“He’s still not ready to move on from Abby, but as we see over the next few episodes, people in his life start telling him it might be time to sever ties,” Stark tells TVLine. “He’s a very romantic person, and he’s really come to love the feeling of being in love. He’s not going to get over this quickly, and whatever happens with the Abby relationship, it will have had a lasting impression on who he is.”

But even with Abby out of the picture, Stark says he doesn’t see Buck slipping back into his old ways. In fact, Stark is “looking forward to exploring this new mature side of him. He’s starting to put people in his life before himself. He always did that on the job, but in his personal life, there’s been a bit of a selfish streak.” 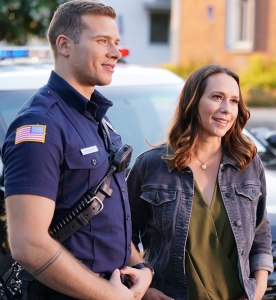 One of those people is Buck’s estranged sister Maddie, played by Jennifer Love Hewitt. “Their relationship is really lovely,” Stark says. “They’re very protective of each other, and it’s bringing out a side of Buck that we’ve never really seen before. It also adds a new dynamic to the show. We’ve had families, but we’ve never had a relationship between siblings like this.”

As for their awkward reunion — you may recall that Maddie was using Buck’s shower, causing him to mistake her for Abby — Stark says, “It wasn’t the first scene we shot together, but it was our first day. Fortunately, we’d met at a couple of press things, so it wasn’t straight into that. It certainly broke the ice, though. And my first scene in the pilot was a sex scene, so I fee like I had a similar initiation.”

Stark insists he doesn’t know whether Maddie’s abusive ex will ever make an appearance, “but if he does, I’m looking forward to seeing how Buck would deal with that,” he says. (Personally, I wouldn’t want to be the guy on Buck’s bad side, but maybe that’s just me.)

Another person Buck is letting into his life is Eddie, played by Ryan Guzman; Stark thinks it was a “smart move” for the writers to snuff out Buck and Eddie’s rivalry in the premiere. “[As firefighters], they have to trust each other,” he says. “They need to have each other’s back so they’ll both feel safe. And I don’t think Buck realized how much he needed someone to go on these crazy little escapades with.”

And even though Stark didn’t meet Guzman until he joined 9-1-1, the two have a surprising connection: “The Boy Next Door was one of my first-ever auditions in America, Stark reveals, “and it was for that part [which went to Guzman]. So whenever people bring that up to him, I’m like, ‘Yeah, let’s talk about The Boy Next Door, sure.’ It’s a nice turn of fate that we’re now working together so closely.”

New episodes of 9-1-1 air Mondays at 9/8c on Fox. What are your hopes for Buck — and the show in general — as we move deeper into Season 2? Drop ’em in a comment below.