David Schwimmer sang nary a chorus of “I’ll Be There for You” in Will & Grace’s Season 10 premiere Thursday. Yet the hitcom’s divorced interior designer was still sure that she’d met her match — literally. “Are we the same person?” she asked his crankypants character. Read on, and we’ll replay the moment that it looked like they were becoming more than, you know, friends. 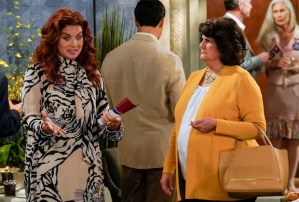 ‘I’M RUNNING FOR PRESIDENT OF THE DUMBEST THING IN NEW YORK’ | As the episode began, Grace was trying (way too hard) to get herself elected president of the New York Society of Interior Designers. When she spotted at her reception Twitter celebrity the West Side Curmudgeon (Schwimmer) — a favorite since he hated everything that she and Will did — her bestie said that, if he were her, he wouldn’t go fangirl out. “Well, we’re different,” she replied, and off she went, approaching the WSC so emphatically discreetly that he was moved to grumble that his identity wasn’t a secret, “so you can stop talking like a drug dealer on a kids show.” Though the WSC — real name: Noah — never cracked a smile, he and Grace bonded over their willingness to do more or less anything for food. (Much like she’d briefly been a Scientologist merely because the welcome center had great chicken salad, he’d gone to AA for the donuts but left because of the camaraderie.) He even asked for one of her “Vote for Me” pamphlets before bailing since she hadn’t put out any appetizers. Wait, that’s not good, Will suggested. Noah probably only took a pamphlet so that he could make fun of Grace on Twitter. He wouldn’t do th— Yeah, Grace had scarcely begun to protest that Noah wouldn’t do that when already, the mean tweet had been posted. And apparently, he was so influential that his mockery could ruin her chances of being elected. 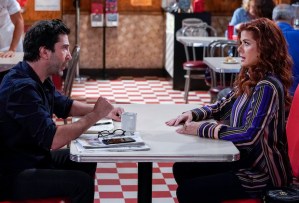 ‘CONGRATS ON YOUR FIVE-SECOND GOOGLE SEARCH’ | Tracking Noah to a diner, Grace confronted him by basically reading aloud his Wikipedia page, which revealed that he’d written one big novel years earlier that she’d only pretended to read because the font was much smaller than the cover implied. (OK, that last part, however true, wasn’t part of her Google search.) Then she got to what was really the matter at hand: How could he tweet that she wanted to be president of the dumbest thing in New York after the way they’d flirted? Flirted? he retorted. “You don’t date much, do you?” Since he refused to delete the tweet, Grace stormed off, only to return shortly thereafter and suggest that he was such a cynic because his life hadn’t turned out the way he’d wanted it to. In turn, he suggested that that was why she followed him. Or had she meant to be alone in her late 40s? “Hey,” she corrected him. “I am in my late-mid-40s.” This confrontation getting her no further than the last one, Grace stormed off, then returned a third time to call Noah a coward — because he’d been too scared to write another book or even follow up on their flirtation. This go-round, he accidentally tipped her off that he’d googled her, a turn of events that left him fumbling for a comeback for a change. “Huh,” he said in response to this rare occurrence. And not just “huh,” but “huh,” and he’d take down his mean tweet. And order her a rice pudding. 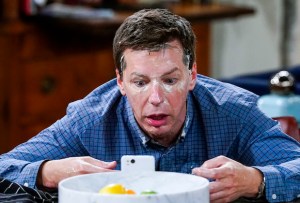 ‘I JUST SAW MY BOOBS WALKING DOWN MADISON AVENUE’ | In the episode’s B plot, Karen discovered that a plastic surgeon named Dr. DiLorenzo had been giving women breast augmentations and calling the implants Karen Walkers, so she made a beeline for her attorney’s apartment. “Grace, is Will here?” she asked Will. Once she understood to whom she was speaking, she got Will to agree to try to get Dr. DiLorenzo to knock off knocking off her knockers (a bit of wordplay that tickled him no end; Karen, less so). No sooner had Karen left than Jack came in and told Will that he had to go with them when they visited the plastic surgeon’s office: He was FaceTiming Estefan’s family in Spain for the first time later and couldnt bear to do so with his current face. To prepare to get his mug laser-blasted back to “nineteen-ninety-sexy,” Jack applied numbing cream. Much too much numbing cream. (See photo, above.) He even licked some off of his lips, which turned out to be a big mistake: Not only did Jack’s face go numb, so did his hands, mouth and tongue. And — oh, crap — with the time difference, his call with Estefan’s family wasn’t later, it was right that minute! Worse, Estefan’s father had recently had a stroke, so it appeared that Jack was making fun of him. Angrily, Estefan told his fiancé that he was no John Mulaney. “Your humor is cruel like Daniel Tosh!”

‘YOU’RE AN AWFUL HUMAN BEING, AND I’LL ALWAYS BE HERE FOR YOU’ | While Jack was unintelligible to anyone else, Estefan understood exactly what he was saying when he explained what had happened. Estefan even sweetly reassured him that he needn’t worry about getting older. “You’re like Peter Pan, but you look even better in tights!” And, as the episode drew to a close, Will reported to Karen that Dr. DiLorenzo’s implants would now be called awoogas. “Normally, ruining an Italian’s business would make my day,” she said. But she was feeling reflective, knowing that every day brought them one step closer to death. On the upside, Will noted, they were at that moment the youngest they’d ever be again. Finally, Karen decided that he was right. After all, they were both filthy rich and… um, oh, yeah. Scratch that, she didn’t have to say. “Age is only a number.” So, what did you think of Schwimmer as a love interest for Grace? Did you like the premiere overall? Grade it in the poll below, then hit the comments.