So you think the White House press briefing has become a total joke? So does Murphy Brown, which uses the famously combative sessions as a springboard for this week’s episode. 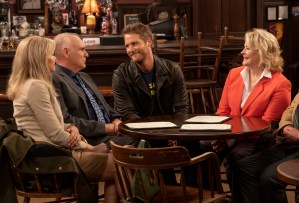 Avery proudly tells his mom that he’ll be representing the Wolf Network at the next White House press briefing — and he’s pretty confident that press secretary Sarah Huckabee Sanders will call on him. (She’s got a thing for him, apparently.) Murphy, though, has been banned from any and all briefings after that very public tiff she had with President Trump last week. She insists she could get in if she wanted to, but when she calls around looking for a way in, she finds that every White House staffer she knew has either been fired or quit. So what does she do? Hatch a very sitcom-y scheme, of course!

Murphy dons a brunette wig and poses as a French journalist named Cosette — Frank’s knowledge of French names seems to begin and end with Les Miserables — to sneak into the briefing with a fake press credential. (She didn’t really need it, though. The guard goes on break and leaves the gate wide open. Murphy marvels: “This country is so screwed!”) Once inside, Murphy ditches the wig and hijacks another guy’s question, going off on a long, uninterrupted diatribe about the White House’s relationship with the press that ends with her asking Sanders point-blank, “Why do you lie?” Oooh… that’s not going to get her invited back anytime soon.

She tries to lead a walkout of her fellow journalists, but no one follows her… not even Avery. At home that night, she’s mad that he didn’t back her up, and he’s mad that she dominated the briefing and ruined his chance to ask a question. He admits it wasn’t easy growing up in her massive shadow, and points out that if all the principled journalists walked out on the briefing like she did, there’d be no one left to hold the Trump administration’s feet to the fire. They make up, and Murphy even says, “I’m sorry” (!) — an event so rare that Avery records it for posterity… and promptly makes it his new ringtone.

Also in “I (Don’t) Heart Huckabee”: Murphy gets saddled with a drunken hot mess as her new assistant, who took a phone message “from a woman, about a thing, from a country” (it was German chancellor Angela Merkel); Phyllis hires a DREAMer named Miguel to work at the bar; and Miles confesses to harboring illicit fantasies about Sanders. (“I have a thing for domineering women.” Ew.)

Got thoughts on tonight’s Murphy Brown? Drop ’em in a comment below.