Do you have any tissues left after Wednesday’s intense crossover between Chicago Fire, Chicago Med and Chicago P.D.?

The three-hour event, which kicked off with a high-rise apartment complex fire, put several of the Windy City’s finest in physical, emotional or mental peril. Read on as we recap five significant character moments and what they mean for the future: 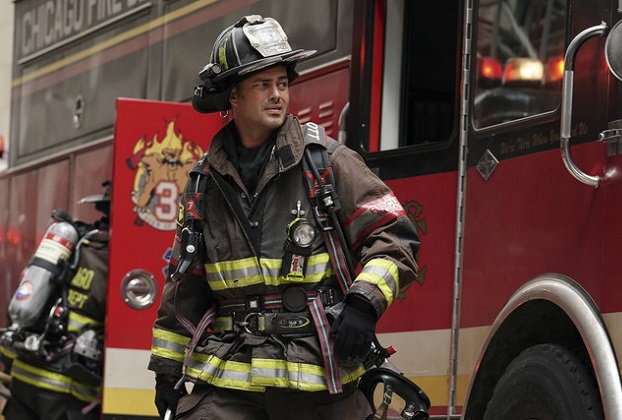 ‘STELLARIDE’ RIDING STRONG | The depth of Severide’s feelings for Stella were on full display after she ran out of oxygen and collapsed during the fire. When the Med docs suggested that the best course of action was removing one of Stella’s lungs, thereby ending her career, Severide spoke up for his girlfriend. The rescue squad lieutenant was so adamant about Stella’s love of being a firefighter that Dr. Choi and Dr. Rhodes called security to escort him out. April, however, came to her friend’s defense, recruiting his firehouse family to convince the docs to try a more risky, but ultimately successful, procedure that saved Stella’s lung. With that, the smooth sailing continues for “Stellaride.” “It’s so wonderful!” star Miranda Rae Mayo coos. “It’s so nice to have such a beautiful man in her life, and he’s strong, and he’s got her back. It’s beautiful. Everything’s going good on that front.” But how long can that possibly last? “I think their bond is going to be a hard one to break,” the actress says. “They literally trust each other with their lives. That’s the foundation… So I have a good feeling about it.”

HEAL THYSELF | When Otis fainted in the hospital, Dr. Charles suggested that the firefighter wasn’t suffering from smoke inhalation, but PTSD. After all, he had just discovered the bodies of a mother and child who were burned alive, and he was shot earlier in the year. Otis rebuffed the diagnosis, insisting that he felt great, and that trauma is just part of the job. However, his emotional state while recounting the bodies he saw made it clear that he was anything but fine. Dr. Charles still discharged Otis, but according to his portrayer Yuri Sardarov, “I don’t think it’s the last that we’ll see of [the storyline].” 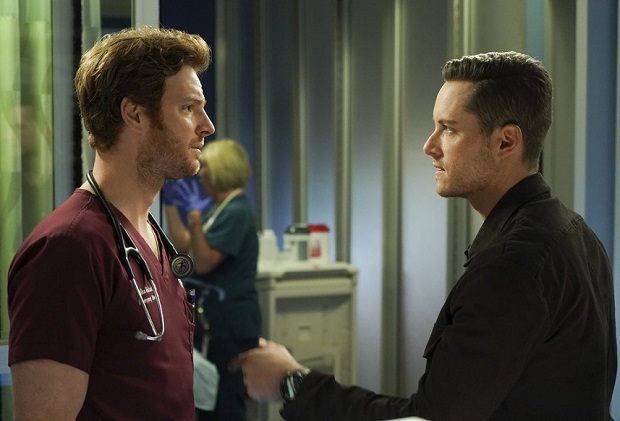 HALSTEADS IN ANGST | In perhaps the crossover’s most intense plotline, Jay and Will were confronted with their father issues when the gruff senior Halstead became a victim of the fire. Dad’s condition took a turn for the worse, leaving him brain-dead, and Jay in crisis over their final moments together, which ended with Jay calling him a “thankless old prick.” Jay and Will were left at odds over whether to unplug their father, with Jay not wanting to let go despite his anger at his dad for making him feel less than his doctor brother. Ultimately, Jay came around to Will’s side, and later discovered that his father secretly kept photos and clippings of his police career, reducing Jay to tears.

Speaking of waterworks, after Jay risked his life to catch the bad guy responsible for the fire, his colleague Hailey had quite the reaction. “I thought he was dead,” she confessed to Ruzek, unable to hold back tears. Hmmm…

A NEW LOVE | The woman whom Cruz rescued during the blaze, played by The Vampire Diaries‘ Kristen Gutoskie? She’s more than just another grateful victim. “She may be a little smitten with [Cruz], and that may be going somewhere for the season,” his portrayer Joe Minoso shares. “I’m pretty excited about it. She’s also, in her own right, a tremendous actress.”

PARTNERS FOREVER | Brett finally got a little bit of closure on Dawson’s departure when she confronted Casey, demanding to know how he could have just let his wife go. “Trust me, I’m angrier than you are,” he replied. “I couldn’t have stopped her. Neither could you.” Brett noted that Casey at least got a chance to say goodbye. He then handed her a photo that Dawson had passed on for Brett, featuring the two friends and the inscription, “Love you, partner, and always will.”

What did you think of the crossover? Grade it via the poll below!