NBC’s latest crossover event between Chicago Fire, Chicago Med and Chicago P.D. (kicking off this Wednesday at 8/7c) has it all: a fiery inferno, several lives in limbo, a gravity-defying stunt and plenty of tears.

Following a high-rise apartment complex blaze, “we end up in the ER with somebody incredibly significant to us, who made a sacrifice, and their sacrifice has a price,” Fire cast member David Eigenberg previews. “So we’re on edge as to what’s going to happen with the person.” Emotions escalate when the firefighters and the Med docs become “at odds” about “what the best course of action and treatment might be,” Med star Colin Donnell shares. “Risks are taken, people are mad and confused and fighting for what they think is right.”

But that Fire team member isn’t the only one in jeopardy. Read on for scoop about the danger to a loved one, a Mission Impossible-style moment and much more crossover action. 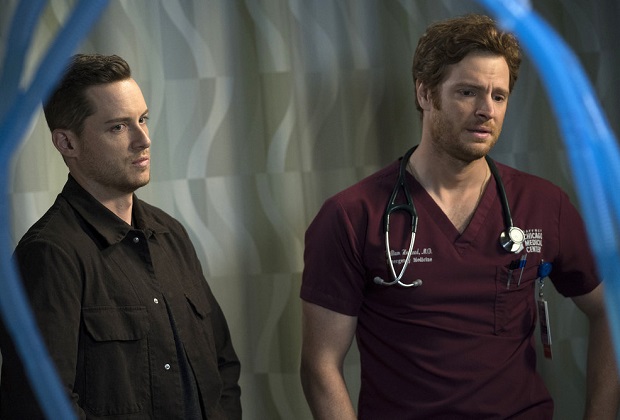 ALL THE TEARS | Prepare for a “very powerful” storyline involving P.D./Med brothers Jay and Will Halstead that “deals with their past and their relationship to their father,” Med executive producer Andrew Schneider says. According to star Nick Gehlfuss, the siblings are “scrambling” to figure out if their dad was in the burning building. His on-screen bro Jesse Lee Soffer warns to expect “heartbreak” during the “really intense” plot. “You’re going to see Jay really broken down in a way you haven’t seen him before,” Soffer describes. “He totally loses it for a second. It’s going to be upsetting, but hopefully, it’ll be really great TV.”

FIREFIGHTERS ON THE BRINK | “Stella Kidd decides, in the fire, that she’s going to work through [it], whether or not she has oxygen left in her tank,” Fire showrunner Derek Haas previews, “and it’s going to be harrowing for Kidd, because her co-firefighter and also happens-to-be boyfriend might be in danger.” 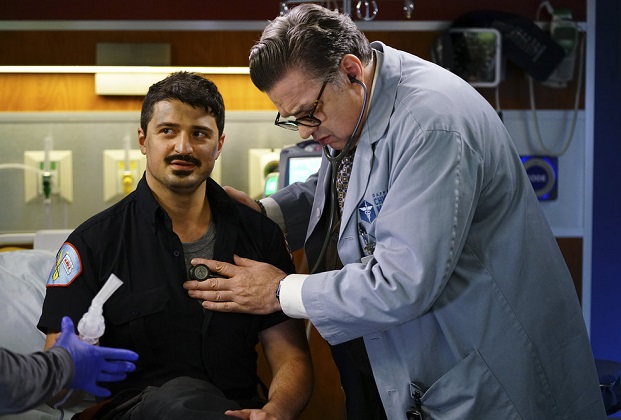 Meanwhile, Otis faces his own crisis, which brings him to Med psychiatrist Dr. Charles, whose portrayer Oliver Platt reveals that Otis “comes into the hospital after something happens to him. Firemen are tough. How they process difficult events, it’s complicated. …. It’s a good, old-fashioned [plot about] Dr. Charles trying to figure out what’s going on with somebody [and] how much are they fronting.” The storyline took “a lot of prep for me,” Fire actor Yuri Sardarov adds. “I don’t think it’s the last that we’ll see of it.”

HIGH-WIRE ACT | Haas raves about a stunt involving Fire leading man Taylor Kinney, aka rescue squad lieutenant Kelly Severide. “He is dangling, for real, off the 23rd floor of a famous Chicago building!” Haas exclaims. “There’s no green screen. With a kid in his lap, by the way! He’s doing it Mission Impossible-style.” And the final product is so convincing, it fooled the show’s own crew. “There’s a pretty great profile shot of the backdrop of the city,” Kinney recalls. “[The director] was in an editing room, and the editor said, ‘Where did you guys green-screen that? How did you do it?’ He’s like, ‘No, that’s real. That’s Taylor, and that’s Chicago, and we shot that.’ It has a really cinematic feel to it.” 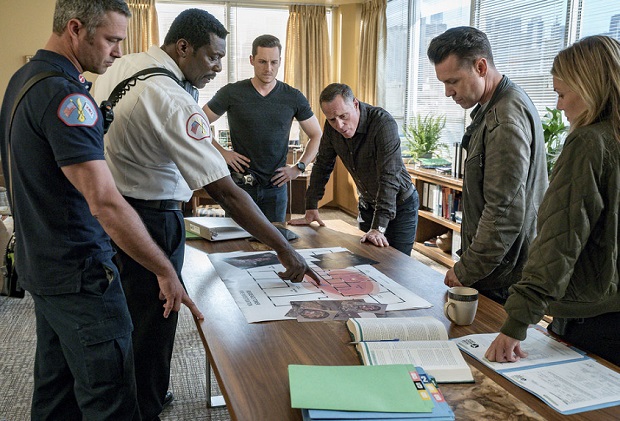 AN UNEXPECTED CONNECTION | Severide will also spend time on Med and P.D., where he will share scenes with his longtime friend/former flame April as well as Jay, with whom he has something of a tense history. This time around, however, “Severide comes through for him,” P.D. showrunner Rick Eid says.

Reminder: Fire temporarily shifts to 8 pm this Wednesday to kick off the crossover. It will be followed by Med (at 9 pm) and P.D. (at 10 pm).