If HBO’s new comedy Camping is meant to evoke the feeling of being stuck on an excruciatingly long camping trip with people you despise, on that level, it’s a success. But on every other level, it fails miserably. Despite a lot of talent in front of and behind the camera, Camping — debuting Sunday, Oct. 14 at 10/9c — is a deeply unpleasant viewing experience, led by the single most insufferable TV character in recent memory. 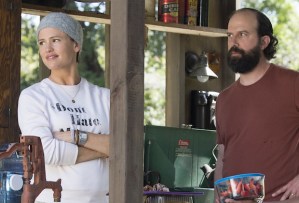 More than a decade after Alias, Jennifer Garner returns to TV here as type-A super mom Kathryn McSorley-Jodell. (God, even her name is annoying.) And from the very first moments we meet her, as she’s hectoring a campground owner about how she’s already booked “four nights at the Groupon rate,” she’s incredibly off-putting. And not in an amusing, Michael Scott kind of way. More in a “get this woman as far away from me as possible” way.

Kathryn is coordinating a group camping trip to celebrate her schlubby husband Walt (David Tennant) turning 45, but the trip is merely a vehicle for Camping‘s broad and hackneyed “this uptight chick needs to relax!” brand of humor. Kathryn is wildly over-prepared, armed with multi-colored folders full of minute-by-minute plans for each day of the trip, and wildly overprotective, hysterically rushing her son to the ER after he’s harmlessly knocked to the ground during a game of flag football. Even her supposed friends are fed up with her histrionics — and who can blame them? Who would even be friends with this woman? She’s a manic combination of Tracy Flick and Clark Griswold, with none of the charm of either.

If that weren’t enough, Camping also saddles Kathryn with a heavy dose of sexual dysfunction, pushing away Walt’s every attempt at affection. (The final straw: Kathryn fancies herself a social media influencer, and can’t stop yapping about her “Insta.”) And Garner, perhaps too eager to show off her comedic chops, overplays it, making Kathryn even more unbearable. It’s a fatal miscalculation of tone that instantly curdles any chance at humor the show might have had, leaving us with a painfully unfunny “comedy” that feels way too long, even at a half-hour. 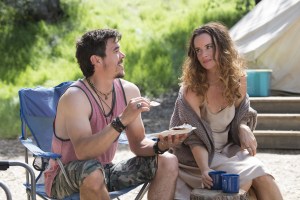 Executive producers Lena Dunham and Jenni Konner — adapting this from a presumably much funnier British series — also had an unlikable heroine on Girls, in Dunham’s own Hannah Horvath. But Hannah was funny, and at least somewhat self-aware. Kathryn is like nails on a chalkboard, and oblivious to how miserable she’s making everyone around her. Camping fares slightly better when Kathryn is off-screen, but only slightly. Juliette Lewis provides a welcome spark as energy healer/DJ Jandice, who crashes the trip as the wild new girlfriend of Kathryn’s friend Miguel. But it’s thuddingly predictable that all of the campers start gravitating toward the free-spirited Jandice instead of Kathryn the taskmaster. Add in Tennant, and This Is Us‘ Chris Sullivan, and Bridget Everett, and Ione Skye… and this really should be a show worth watching. But I regret to inform you that it is not.

I watched the first four episodes of Camping — perhaps “endured” is the better word for it — but honestly, I could’ve stopped before finishing the first one. (And would have, if this weren’t my job.) It does not improve, and just keeps hammering the same tired joke over and over again. It’s a colossal waste of everyone’s time and talent. Cringe humor without the humor is just cringing… and I unfortunately did a lot of that while watching Camping.

THE TVLINE BOTTOM LINE: The deeply unfunny Camping wastes a talented cast and gives us the most insufferable TV character in ages.