The heroic death of Linda Reagan — a nurse killed in an accidental Medevac crash, in the course of saving lives — acquired a possibly darker tone with the Blue Bloods Season 9 premiere.

In the CBS drama’s year-ago opener, you will (sadly) recall, it was gradually revealed that Danny Reagan’s wife had died off-screen, between seasons. “Linda’s death wasn’t your fault. She was doing her job [as a nurse]. She died doing what she loved,” Danny’s therapist noted, softly dropping the bombshell on viewers. “She died in a helicopter crash, airlifting her patient.”

This past Friday’s episode, however, dangled the possibility that said crash was perhaps orchestrated, by Mexican cartel member Louis Delgado aka The Panther (played by Season 9 premiere guest star Lou Diamond Phillips). 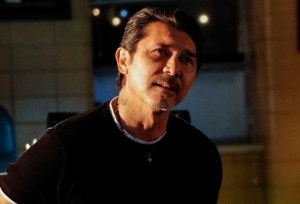 “First your house burns up and then a chopper goes down — that’s some pretty bad mojo you carry around,” Delgado said to Danny upon being brought in for questioning about a cartel-related murder.

Since Delgado had already (and gladly) taken credit for the torching of Danny’s home at the close of Season 7, it could be inferred that he was hinting at having a hand in Linda’s work-related tragedy as well.

Or was he just goading his adversary?

TVLine reached out to Blue Bloods showrunner Kevin Wade for clarification — “Are we to surmise that the cartel sabotaged the Medevac copter?” — but he would only say this, via email: “The fact that Delgado brings it up certainly sounds alarms for Danny, and likely does for the audience as well.”

Interestingly, several TVLine readers such as Stingy Nina and Mad Hobbit suggested in the wake of Linda’s death that the Mexican cartel was somehow involved. And while show boss Wade has pretty much nixed the idea of ever revisiting the actual day of Linda’s death (“We’ve never done flashbacks, and I don’t think I’d start now”), planting the idea that it wasn’t so accidental is a way of revisiting Danny’s loss and even offer new closure, seeing as Delgado (seemingly) wound up headless at the close of this season’s premiere.

Wade shed some light on Linda’s shocking send-off in a TVLine interview this past spring, saying, “I was between a rock and a hard place, because the simple fact of the matter was that [original cast member Amy Carlson] decided not to renew her contract. And because that happened after we’d wrapped the previous season, we really had very little wiggle room, but we did the best we could with a tough situation.”