NCIS: Los Angeles opened Season 10 right where the CBS drama had left off, with the immediate aftermath of the Mexican cartel’s shoulder-fired missile blowing up the truck carrying Callen, Sam, Kensi and Deeks.

As the wreckage burned, cartel boss Spencer Williams arrived on the scene and ordered his men to remove the bodies from the vehicle, in case his son was on board. Kensi was banged up but lucid; Callen would eventually realize he has broken ribs, one of which punctures a lung; and Sam’s previously wounded leg is about to start bleeding profusely, its stitches torn open. Deeks, meanwhile, is unconscious, having suffered a traumatic brain injury.

Spencer is about to start putting bullets into the injured NCIS agents, if they don’t reveal the location of his and Mosley’s kid, when Arlo Turk, the local ATV rental dude, shows up ready to trade the tyke — gagged inside in a wired-to-explode canvas bag — for the Americans. Spencer takes the deal and lets Turk take the agents, with the understanding that he will drop the kid off down the road. But as they drive away, Turk reveals to Kensi & Co. that it’s just his trusty pooch inside the bag. 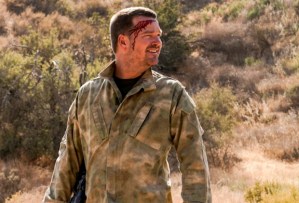 Sam guides Turk to their exfil plane, only to realize that the pilot has been shot dead and the fuel tank drained. Soon after, cartel gunmen begin shooting at them from a distance — before firing, yes, another missile at their latest transpo! As Turk and Kensi cease fire to lead the gunmen to think there are no survivors, Callen gets the drop on the baddies and begins slitting throats/doing choke holds. With just a compromised motorbike at their disposal and Deeks unconscious on a stretcher, the quintet make the questionable decision to split up. Turk heads off with his dog; Sam and Callen take the bike as far as it will get them; and Kensi drags Deeks through the brush.

After the bike conks out, Sam and Callen run into a local lad whom they then must detain, lest he snitch on them to others. Kensi meanwhile sets down the stretcher and takes a breather before braving a steep hill, during which she trades sexy banter with a vision of Deeks. Resuming the climb, Kensi discovers an old church, inside which she cuddles with Deeks, imploring him to wake up. Sam and Callen themselves find shelter inside a tin shack, where they take stock of their debilitating wounds. The lad runs off, but later returns with his father and other men, who offer supplies with which Sam can vent Callen’s collapsed lung. 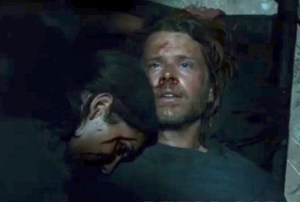 At the church, a local man named Francisco arrives and keeps Kensi and a barely conscious Deeks guessing about his intentions. (While clutching a shotgun, he claims to have called his wife for help, though he then claims his cell phone battery has died.) The wife, however, does in fact pull up with a station wagon, and they all climb inside. Things are quite genial during the drive, with Francisco — a former clergyman — even offering to marry the Americans (if they so desire). But when Kensi realizes they are not heading toward the nearby town but to the cartel compound, Francisco points his gun at her, explaining that the bounty on their heads is too big to pass up. Kensi lunges for and wrestles Francisco for the gun, shooting dead his wife, who was driving. She then KOs Francisco, before steering the car to a stop. After shoving the bodies out, Kensi takes the wheel and races Deeks to the closest hospital.

Sam, who had passed out from blood loss, and Callen have also been brought to the hospital, where Spencer has a gunman in wait, ready to snuff the NCIS agents. Kensi meanwhile teams with Turk to wield some big guns at the hospital’s front door and hopefully scare off the cartel’s dozen-plus arriving gunmen. The assassin inside the hospital sneaks into Sam and Callen’s room and is about to pop them both… but he is shot first, by a pistol Sam had under his blanket.

Outside, Kensi and Turk’s scare tactic is starting to unravel as — unbeknownst to them — a double-fisting Mosley walks up to the sedan carrying Spencer. She orders her ex to pull back his men, and maybe they can talk things out. Spencer twice calls her bluff — and each time, she guns down one of his fellow passengers. When Spencer then orders his men to execute, Mosley shoots him dead, then orders the driver to use the walkie to report on the death and call off the assault. When the gunmen then retreat from the hospital entrance, a puzzled Kensi and (Special Agent!) Turk are greeted by arriving NCIS agents who had been dispatched by Hetty. Everyone is then transported to Bogota Naval Medical Center for proper treatment.

Alas, not everyone survived the off-books op to save Mosley’s son. Back home, Nell reports to Admiral Hollace Kilbride (returning guest star Gerald McRaney, always making everything better) that the burned remains found down in Mexico indeed do belong to Special Agent Harley Hidoko. Mosley herself, meanwhile, will have much ‘splaining to do, Admiral Kilbride makes clear, having put any agents in such self-serving jeopardy.