Warning: The following contains spoilers for the Season 4 finale of Fear the Walking Dead. So you might want to watch first, read later.

Since Fear the Walking Dead’s penultimate Season 4 episode was titled “I Lose People… ” and its finale was called “… I Lose Myself,” it would’ve been understandable if you’d worried that Morgan’s circle of friends was about to shrink, and his life expectancy, shorten. But would new showrunners Andrew Chambliss and Ian Goldberg really end their first season on such a low note? Read on and find out. 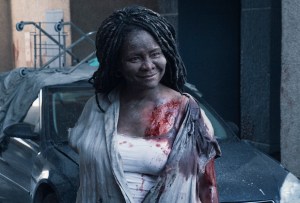 ‘THE BITCH SAID SHE LIKED ME’ | As the episode began, Al, clearly having made it out of the hospital’s generator room in one piece, lucked into a new camera while hiding in a parking garage a couple of miles away. But, since she couldn’t reach anyone on the radio that she retrieved from a cop car, she hot-wired it and made tracks back to the hospital. There, she came face to face with Martha’s latest attack walker, poor Jimbo (whose back you’d have thought his fall would’ve broken, no?). The two of them exchanged their favorite bits of dialogue — the Filthy Woman blathering about who’s strong and who isn’t, and Al going on about her stolen tapes — then Martha asked the videographer to deliver a message to Morgan. When she balked, Martha unleashed Jim, whom Al knocked down with a gunshot. Since she wouldn’t pull the trigger on Martha, the Filthy Woman knocked her out.

Once reunited with her friends, Al learned that she’d been used like a carrier pigeon: Martha had left on her a videotape with her message for Morgan. “You’ll see me again,” she told Mo-Mo, “and when you do, I’ll be stronger than ever, and I’ll make you strong, too.” (Oh, that again!) That night, around the campfire, the group agreed to return to Polar Bear’s truck stop and stock up on supplies before setting off for Alexandria. Only Morgan wouldn’t be going with them — not right away, he admitted privately to John. Thinking that he understood Martha, he was determined to help her get unstuck. In response, John pointed out that “there’s some fish in this world that just won’t be caught no matter what you dangle in front of ’em.” And, he added with a grin, in this case, maybe the Filthy Woman wasn’t the fish, maybe Morgan was! 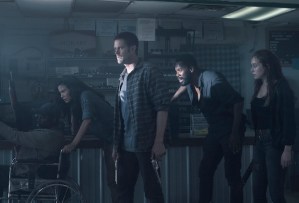 ‘LET’S FIND ANOTHER REASON TO LIVE’ | The next day, while Morgan made plans to rendezvous with Martha (who sounded over the walkie-talkie like she was already halfway to walkerville), the others returned to Polar Bear’s truck stop and enjoyed the amenities. During the rare respite from Filthy Woman attacks or walker assaults, June admitted to John that she’d been afraid he’d realize that she wasn’t who he’d thought. Not to worry, he replied. “I know you. It doesn’t take a whole day to recognize sunshine.” (Aww… !) Anyway, June wasn’t scared anymore. “I know who I am now,” she said. “You gave that to me.” (And thank goodness this isn’t The Walking Dead, because you just know on Fear’s sister show, that would be the moment she was killed off!)

Meanwhile, Morgan found Jim in the back of the police car that Al (and then, apparently, Martha) had been driving and put him out of his misery. Nearby, he also discovered Martha face down in a field — so that’s how she maintains that filthy look! — and forced her into the back of the police car. By God, he was going to help her whether she wanted to be helped or not! On the road to the truck stop, he eventually got her to open up about her husband’s demise but had no luck forcing antibiotics on her. Soon, he was distracted, anyway, by a desperate message over the walkie-talkie: Al, June, John, Strand… everybody was sick and getting sicker. And their not-quite-dead-yet bodies were attracting walkers to the truck stop like flies to a stiff. Morgan desperately tried to respond, but alas, the signal from the truck stop was much stronger than the signal to the truck stop. 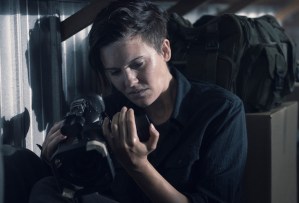 ‘IT DOESN’T HAVE TO END THIS WAY FOR US’ | As Mo-Mo put the pedal to metal to get back to his pals, Martha finally agreed to take some antibiotics… then, when he handed them to her, wrenched his arm and got them into a nasty accident that left a piece of car sticking out of his leg! “I made sure you couldn’t help,” she told him when he awakened. “Now you either kill me or I kill you.” He’d no sooner cued up “I don’t kill” from his Greatest Hits album than June reported over the walkie-talkie her horrifying discovery: All of the bottled water at the truck stop had been poisoned. With antifreeze, Martha told Morgan. “That’s what you get for helping me.” For a second, it looked like Morgan was going to choke the life out of her, but then, he glimpsed in the police cruiser’s side mirror what she’d written on his face while he was unconscious — “I lose people, I lose myself” — and stopped. Instead, he painfully yanked the piece of metal out of his leg, handcuffed Martha to the car (to keep her from hurting anyone as a walker) and took off on foot to save his friends.

Back at the truck stop, the gang seemed to be competing to see who could look sicker. Al spent what might have been her last moments rewatching tapes of people she’d met and for whom she’d obviously cared. Newly inspired, she made her way to the radio and tried Morgan again. This time, he was able to get a message back — that they’d drunk antifreeze. The antidote for that, June knew, was ethanol. And they just happened to have a crashed truck full of it sitting in front of the truck stop. All they had to do was get past the walkers. Easy peasy. “Let’s stir up some beef,” said Sarah. And, at first, it seemed like the walkers were going to be polite enough to wait their turn to be taken out so that Strand and Lucy could fill gas cans with ethanol. But, as will happen in these situations, one thing (a weakened Sarah needed to be taken back inside) led to another (Al using her SWAT van to take out all the walkers and — oops — blow holes in the truck!), and the mission wasn’t accomplished. 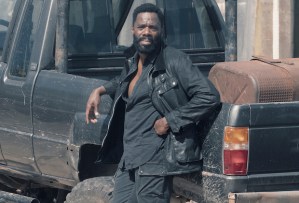 ‘JUST WHEN I STOPPED TRYING TO DRINK MYSELF TO DEATH, I SUCCEED’ | After June reported that they’d lost the ethanol and were too weak to try and find more, Morgan freaked. “I can’t go back to what I was,” he cried. And that was what would happen, he feared, if they couldn’t be saved. So, while the gang tried to make peace with their fast-approaching deaths — and yes, naturally, Al filmed one last tape! — Morgan went back and retrieved the truck full of Augie’s Ale. Because, as he put it upon making it to the truck stop, ethanol is “just a fancy word for alcohol, right?” As everyone got their life-saving drink on — even underage Charlie as “a one-time deal,” John noted — Sarah raised a bottle to Jim and Lucy gazed at the neon beer sign as if it was Polar Bear. “I get why this is what you wanted,” she told him/it. As for Morgan, he washed his old catchphrase off his face, then went back to the police car to put down Martha, who’d pulled or chewed or something’d off her own arm and was wandering nearby, walkerfied.

As the episode, and the season, neared its conclusion, Morgan announced to his friends that they weren’t going to Alexandria. “At least I’m not.” Martha became what she was, he explained, because no one would help her. And there are a whole lot more Marthas out there who could use a hand. Having read Polar Bear’s journals, he knew that Clayton had set up shop at an isolated denim factory for which he’d once made deliveries. In other words, Mo-Mo was suggesting that they move in and continue Polar Bear’s work as a good Samaritan. At first Sarah balked. “I don’t need a new pair of dungarees, Mo-Mo.” But this, Lucy suggested, could be Sarah and Wendell’s way of making up for what they’d done to Clayton. Alicia was in — more than all in, even. She wanted to go beyond boxes and do what Madison had tried to — build the factory into something more. And where would they find the people to help? Some of the folks on Al’s tapes, she said, hadn’t been doing too well. (So yeah, she was sticking around.)

As “… I Lose Myself” ended, the group set off on their first do-gooder mission, and, it seemed, the show had been reborn as something new and very different. Question is, do you like where it’s headed? Grade the finale in the poll below, then hit the comments.