NBC added another medical drama to its lineup with the series premiere of New Amsterdam on Tuesday. Will you be checking into this hospital?

Ryan Eggold (The Blacklist) stars as Dr. Max Goodwin — did no one point out to the producers that there’s already a Goodwin on Chicago Med? — the new medical director of New Amsterdam, the oldest public hospital in America. (It even has its own public school and prison!) The institution has gone through five medical directors in five years, so the gig is not without its challenges. Still, the “How can I help?”-spouting Max doesn’t waste any time making big, sweeping changes on his first day, including firing the entire cardiac surgical department for putting profits over patient care. 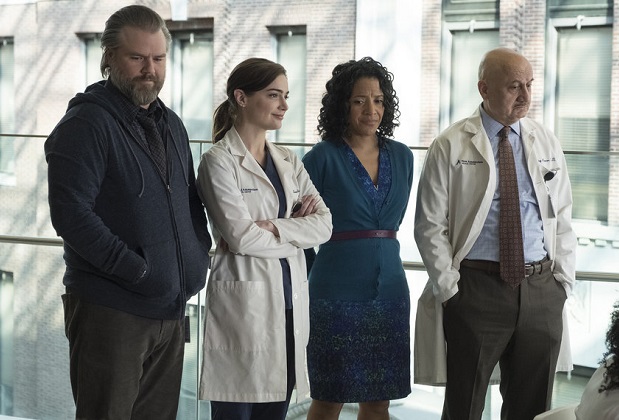 Among the staff not out of work are ER head Dr. Lauren Bloom (Salem‘s Janet Montgomery) — whom Max asks to perform a throat biopsy on him — the caring psych boss Dr. Iggy Frome (Reaper‘s Tyler Labine) and neurologist Dr. Vijay Kapoor (Sense8‘s Anupam Kher). Meanwhile, Lauren’s maybe-paramour Dr. Floyd Reynolds (The Last Ship‘s Jocko Sims) not only earns back his job, but also gets promoted to lead the cardiac surgical department when Max realizes Floyd isn’t an eager-to-cut surgeon.

Rounding out the main players is Dr. Helen Sharpe (Doctor Who‘s Freema Agyeman), who jets off against Max’s orders to tape TV appearances and give speeches around the world. At the end of the episode, she confesses that she’s been running away from New Amsterdam because she became immune to death. Then she diagnoses her new boss with cancer before asking, “How can I help?”

What did you think the new medical series? Sound off via the polls below.