Fox’s The Gifted hit quite the baby “bump” during its Season 2 premiere on Tuesday night. Was Marcos able to reunite with X-pectant Lorna in time for their child’s birth?

The Season 2 premiere at first picked up not long after the events of the freshman finale (in which the Frosts goaded Lorna into crashing the PJ carrying mutant-hating Senator Mendez and mad scientist Dr. Campbell). We see Reeva, a member of the Inner Circle, defending the incident in Atlanta and the bold actions of her “pets” (aka the Frosts), but the rest of the council nonetheless condemns her. Saying it’s always been her style to ask for forgiveness vs. permission, Reeva unleashes her own mutant power — a sonic scream of sorts — to cause anguish in her rivals and make them sitting ducks for pistol-packing Esme, Sophie and Phoebe.

In D.C., Reeva, the Frosts and Andy Strucker are making preparations for the imminent arrival of Lorna’s baby, by scouting out an old munitions building made of concrete and stone and then constructing a Polaris-resistant delivery room within. Despite the reassurances of Reeva, who has “lost good friends” in this fight, Lorna has a “bad feeling” about her childbirth, and asks Andy to protect the baby at all costs.

As for those still a part of the Mutant Underground, they work carefully  — being presumed dead and all — to save mutants from Sentinel Services raids and whisk them to safety, with new identities. Marcos has lost track of his baby momma all these months later, while Caitlin similarly is a bit obsessed with locating son Andy, leaving her oblivious to the fact that husband Reed is privately grappling with the manifestation of his heretofore suppressed mutant powers. 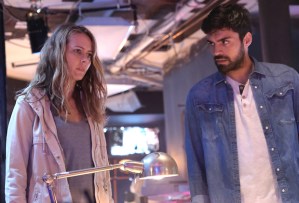 Against the others’ advice, Marcos, with Caitlin adamantly tagging along, goes to suss out Wire, a mutant hacker whom he tasked with getting a bead on the Inner Circle. When Wire — having gotten wind of the “heavy stuff” the Inner Circle is involved in — holds out for a bigger payday and draws a gun on Caitlin, the emboldened mother swings into action and gains the upper hand on the hacker, but catches a bullet from his henchman in the process. After they get what they came for — a flash drive of info on the Inner Circle’s finances and such — Caitlin is tended to back at the Underground, where Reed is rattled to learn of her risky outing. 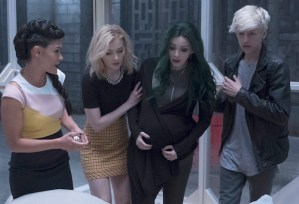 As Lorna suddenly goes into labor, she (and baby?) play havoc with the city’s electrical grid, to a degree that Marcos senses the light show could only be her doing. He and the others hop into a van and follow the electromagnetic pulses and sparks, hoping they will lead to Lorna. Lorna’s doctor, meanwhile, reports that the delivery is experiencing complications due to the mom-to-be’s “mental block.” After convincing Andy they intend no harm, Reeva cues the Frosts to use their powers to “show” Lorna a future where mutants have been accepted, and she has her happy daughter at her side. Reeva asks: Isn’t that what Lorna wants? “More than anything,” she answers, before heading into her final salvo of violent pushes.

When a final pulse of energy cascades the city into darkness, Marcos fears the worst. But inside the special delivery room bunker, we see that his and Lorna’s child has safely entered the world, where she will signal the dawn of a new age. Ergo her chosen name — Dawn.

What did you think of The Gifted‘s return?