As The Voice kicked off Season 15’s Blind Auditions Monday night, I swore to myself — yes, again — that I’d be a tougher grader this time around. I know — man, do I ever know — how annoyed you are when I get swept up in the excitement of a performance and assign a higher grade than, in retrospect, maybe I should’ve. But then the show started, and I’ll be damned if I didn’t get sucked in by its manipulative, aspirational introduction. So we’ll see how it goes gradewise; I assume, as ever, you won’t be shy about telling me when I’ve gone too easy (or been too hard) on someone. And you’re always welcome to provide alternate grades in the comments.

Season 15’s coaching panel, as I’m sure you know, retained lifers Blake Shelton and Adam Levine, and brought back Kelly Clarkson and Jennifer Hudson for their sophomore seasons in the swivel chairs. (Less exciting was the return of the dreaded Block.) New to the contest is The Comeback Stage, a digital companion series in which country star Kelsea Ballerini coaches half a dozen singers who didn’t get a chair turn in their Blind Auditions. Ultimately, she’ll send her two best to compete during the actual show’s Live Playoffs Results episode for an Instant Save that will get them added to the team of their choice. Got all that? (Thus far, soulful Ayanna Joni has been sent to do Battle with an as-yet-unknown opponent on The Comeback Stage.)

So, enough set-up. Let’s get on to the performances, a few of which were pretty dazzling… and one of which… eh, wasn’t as impressive as the singer’s wild mane. 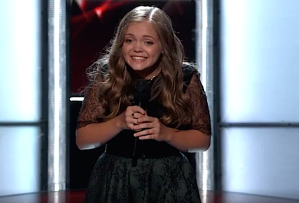 Sarah Grace, “Ball and Chain” (Team Kelly) — Grade: B+ | Who says TV isn’t educational anymore? This baby-faced blues singer from Houston explained the condition with which she was born: synesthesia, which makes her see colors when she hears music. I didn’t see any hues when she sang, but I did hear the makings of a star. She’s one of those kids with a voice that makes her sound three times as old as she is (as well as on her second divorce and fourth drink at a dive bar). After marveling that, during the youngster’s performance, she’d had “stank face for days,” Kelly beat out Blake and Jennifer to make Sarah the second 15-year-old she’d recruited on her first chair turn. (And we all know how her first turned out: Brynn Cartelli won Season 14.) 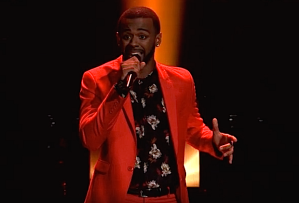 Tyshawn Colquitt, “Like I Can” (Team Jennifer) — Grade: B | The oldest of 10 kids growing up in the projects in Cincinnati, Tyshawn started his performance a little overwrought for my taste. But, vocally speaking, he quickly smacked me upside the head for making a snap judgment, displaying impressive range (that went all the way up to what Blaked dubbed a “falsetto hummingbird whistle”), an energetic stage presence and a smile as sweet as the pound cakes he delivers for his mom (and shared with the coaches). Eventual coach Jennifer called his voice “limitless,” and, though he didn’t wow me like Season 12 winner Chris Blue, whose abilities really defined the word, he piqued my interest enough to make me look forward to finding out whether she was right. 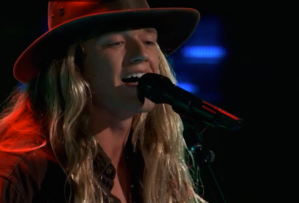 Tyke James, “Perfect” (Team Adam) — Grade: C- | Blessed with hair that would’ve made him a hit in an ’80s heavy-metal band and abs that could get him cast on Riverdale in a heartbeat, this 17-year-old Hawaiian dreamboat sang with a disarming vulnerability. Unfortunately, his appealing stage presence, pleasant-but-hardly-earth-shaking vocal and trippy-cute personality didn’t strike me as a combo that would take him past the Battles. Maybe if he attracts as many adolescent fans as Season 12’s Mark Isaiah (who, you’ll recall, lasted well beyond his expiration date). But that’s a big “maybe” for this single chair-turn. 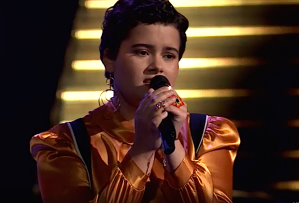 Mercedes Ferreira-Dias, “She Used to Be Mine” (Team Blake) — Grade: B | After almost getting a chair turn from Kelly in Season 14, this 17-year-old returned with a positive attitude and a Sara Bareilles number that helped her overcome her self-doubt. Me, I still have some doubts. Mercedes sounded lovely on the verse and powerful on the chorus, but — was it only me? — I often felt like she wasn’t entirely in control of her vocal. Blake said that he could “hear her heart” in her voice, and that, I agreed with. Perhaps what I took as “almost losing it” was actually just emotion. Watch — after the Battles, she’ll wind up being the singer I’m kicking myself for ever having been skeptical about (and I can’t deny it, there’s one — at least one — every season). 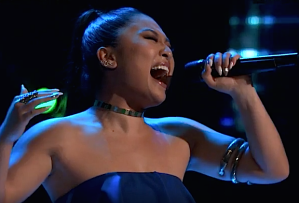 Radha, “Mamma Knows Best” (Team Adam) — Grade: A | Well, hello! This 19-year-old Jersey girl damn near knocked me off the couch with the force of the opening notes of her Jessie J cover, and she was just getting started! Not for a moment of her performance did she let up; she was just at 11 the whole freaking time. So no wonder Adam used his Block to keep the powerhouse from joining Team Jennifer (and wished he’d had two Blocks to keep her from joining Team Kelly, too). Methinks he got himself a real contender. 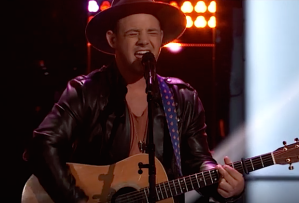 Kameron Marlowe, “One Number Away” (Team Blake) — Grade: B | When this 21-year-old car-parts salesman started singing Luke Combs, his vocal was so raspy-sexy-mumbly, I got chills. Actual chills. (And yes, I know I’d ordinarily complain about a mumbly vocal; to hell with it — this one really worked.) The rest of Kameron’s performance, while perfectly fine, didn’t make quite the same “Cowabunga!” impression. I’m also not sure his range is terribly big. However, if Blake steers him toward songs that pull out the best, and the most, of him, the would-be country star’s “Aw, shucks” personality and camera-ready mug could take him far. 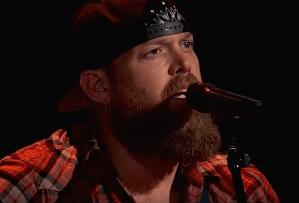 Mikele Buck, “She Used to Be Mine” (Team Kelly) — Grade: A | Holy crap, this guy was terrific! I couldn’t believe he made it to damn near the end of his Brooks & Dunn cover before Blake and Kelly swiveled. (Turned out, that was just strategy.) The 39-year-old West Virginia native, who told us that his guitar saw him through a tour of duty in Iraq, didn’t just sing with enough dirt road in his vocal to make us believe him when he said he did “both kinds [of music] — country and Western,” he also sang with enough ache that any given note could re-break a heart that was already in pieces. Bound for the Final Four. Guaranteed.

Patrique Fortson, “Get Here” (Team Jennifer) — Grade: B+ | After starting his Oleta Adams cover with a fine falsetto, this snazzily-dressed 38-year-old Atlantan dipped into a lower register that was so to-die-for, it left me wondering how the hell I was going to describe it. Thankfully, JHud did it for me: “When your voice opened up,” she told her future team member, “the gates of heaven opened up.” Now let’s just hope she doesn’t pull a Chris Weaver on him and stick him with some crappy-ass song that makes him easy to cut. I want to hear what he’d do with “I Will Always Love You.” 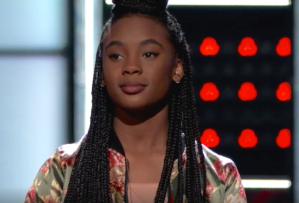 Kennedy Holmes, “Turning Tables” (Team Jennifer) — Grade: A | During this 13-year-old’s pre-performance interviews, I was struck by how incredibly poised and confident she was. Then the St. Louis, Mo., schoolgirl got on stage, and I was like, “OK, this is actually what preternaturally poised and confident looks like — and sounds like.” She earned a four-chair turn by singing Adele so gloriously, you’d have sworn she’d been doing it for longer than she’s even been alive. Unless tween nerves take hold of her — she did, after all, break down in tears when JHud first spoke to her — she’s gonna slay. And hey, she did recover so fast that a moment later, she was able to duet with her future coach on “I Am Changing.”

So, what did you think of the Season 15 premiere? Whose performance stood out to you? Vote in the polls below, then hit the comments.