A storm is brewing at Chastain Park Memorial Hospital — and not just the literal typhoon that rolls through Atlanta in The Resident‘s Season 2 premiere.

No, there’s also a metaphorical storm in the works, and it likely won’t shock you to learn that Dr. Bell and Conrad Hawkins are in the center of it. Now that Conrad’s father is the chairman of the board at Chastain Park, Dr. Bell is even more ornery than he was last season, and he apparently plans to take it out on Conrad as soon as he gets an opportunity. (But more on that later.)

Monday’s sophomore debut finds the hospital dealing with a major storm, which causes the power to go out in the building — and the back-up generators aren’t in good enough shape to keep the hospital running for more than 40-ish minutes. (You mean the same amount of time as a traditional episode of TV? My, that worked out nicely!)

The hospital is immediately plunged into chaos (and darkness): Tests can’t be run, patient files can’t be accessed and nurses have to fall back on the triage method, prioritizing care for the sickest patients in the building. And that’s to say nothing of those who are already in surgery, like premature newborn Mabel, who is getting a heart deformity fixed by Mina and Dr. AJ Austin, ideally before the back-up generators give out. (Real talk: I know The Resident would never be so heartless as to kill off a premature infant… but that didn’t stop my blood pressure from skyrocketing during Mabel’s insanely tense surgery. She’s just so little, you guys!)

Conrad, meanwhile, stays true to his character and breaks all of Dr. Bell’s power outage-induced rules, including the one that prohibits more ER patients from entering the hospital once it’s reached capacity. When an 8-year-old boy shows up on a stretcher outside Chastain Park, rapidly bleeding out from a gunshot wound, Conrad tosses protocol out the window and lets the boy inside. He makes a snap decision to perform surgery on the kid — much to the chagrin of actual surgeon Dr. Nolan, who carries out the procedure — and it turns out to be the right choice. If the boy had been transferred to another hospital that still had power, he would have died on the way there; thanks to Conrad pulling a Conrad, he’s going to survive.

But the most crucial case of the hour is the one that seems most innocuous at first. One of Nic’s patients, a recent college dropout named Joplin, comes in with symptoms of a UTI, something she’s suffered from before. Nic gives her an antibiotic to stop the UTI from becoming a kidney infection, keeps her overnight for observation and that seems to be the end of it. 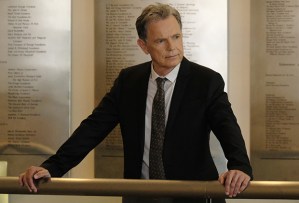 Meanwhile, about halfway through the hour, Chastain Park’s IT guy delivers some stunning news to Dr. Bell: The power outage didn’t happen because of the storm. It happened because of a hacker who invaded the building’s system… and in a very When-a-Stranger-Calls turn of events, the hacker is someone inside the hospital. (Someone that’s tried to pull off this hack before, actually.)

Later, Nic goes to check on Joplin and realizes that the girl — who has suspiciously been typing away on her phone all night, even into the wee hours of the morning — isn’t breaking out into hives like she usually does when she takes an antibiotic. Joplin confesses to flushing the pills down the toilet instead of swallowing them, and when she grabs her cell phone for the umpteenth time that night, Nic takes notice.

“What were you majoring in before you dropped out of college?” Nic asks Joplin, piecing it all together — and the final piece comes into place when it’s revealed that Joplin was a software engineering major at MIT. But she had to drop out because of crippling medical bills, which has left her with some serious bitterness toward Chastain Park. Enough bitterness to, say, hack the place.

After some pressure from Nic, Joplin admits to having hacked the hospital’s computers, at which point Nic breaks it to her that even though she only intended to hack the billing department, Joplin caused chaos in the entire building, and dozens of lives are at stake because of her. Joplin gives a tearful apology, hands over the back-up USB drive that gets the hospital’s power back on, and Nic and Conrad get a reluctant Dr. Bell to agree not to press charges against the girl. (After all, given that Dr. Hunter is facing 13 (!) felony charges for last season’s crimes, Chastain can’t really afford another PR disaster so soon.)

The premiere closes with a series of happy endings: Baby Mabel’s heart surgery is a success, and she’s reunited with her twin brother in a scene that got me all kinds of weepy; Mabel’s dad, who was initially thought to be having a stress-induced stroke, was merely having an allergic reaction to a protein bar; and for those curious about the state of Conrad and Nic’s relationship, they begin and end the episode by having sex, so things seem just fine there.

Dr. Bell, however, isn’t about to let Conrad off the hook so easily for going rogue during the power outage. After firing the hospital’s IT guy (unfair!) and his space cadet of an assistant (totally fair!), Dr. Bell turns his attention to Dr. Nolan, the surgeon who also broke protocol and operated on that 8-year-old shooting victim during the storm.

“Cut the crap and tell me exactly what happened in the ER,” Bell urges Nolan. “Who made the first cut? You or Conrad Hawkins?” The scene ends before Nolan can respond, but it doesn’t exactly look like he wants to cover for Conrad’s incision.

OK, your turn. What did you think of The Resident‘s return? Grade the Season 2 premiere in our poll below, then hit the comments to back up your choice!