The episode begins some time after Andrews’ promotion. Melendez’s team is waiting to meet with the new head honcho for individual evaluations, beginning with Shaun. Andrews tells the doctor that he’s exceeded his expectations in terms of expertise and technical execution, but his communication skills are sorely lacking. He later advises Claire to assert herself more, and tells the egotistical Morgan that she needs to learn how to be a team player. Interestingly, we skip right over Park’s evaluation. Perhaps it was left on the cutting room floor?

Jared opts to forgo his evaluation entirely. It is, after all, his last day at St. Bonaventure, and he’s not on hospital grounds. Andrews has tasked him and Shaun with setting up a mobile clinic for homeless patients. There, a man named Harry sneaks onto the bus and attempts to steal chlamydia medication. He suffers from disorganized thinking, paranoia and delusions, which leads Shaun to a schizophrenia diagnosis. Shaun and Jared confront Harry, who then reveals a boil on his gums which looks to be infected. Shaun hands him alcohol to wash out his mouth, but he struggles to grab ahold of the cup. Harry then complains of a stiff neck, which Jared says can be an early indicator of bacterial meningitis. Shaun’s not convinced, but Jared insists they take Harry back to the hospital for a proper lumbar puncture, ergo disobeying Andrews’ orders to remain at the mobile clinic for the duration of his final shift.

Back at the hospital, Andrews scolds Jared, promising to report him to his new boss in Denver if Harry’s lumbar puncture results come back negative for meningitis, which is exactly what happens. Upset, Jared storms off to load up the mobile clinic on his own, but Shaun insists on accompanying him on his last day. Jared proceeds to point out the irony to Shaun, who refuses to be by Glassman’s side as he begins cancer treatment, unwilling to accept that his mentor is sick. He explains to Shaun that no matter how scared he thinks he is regarding Glassman’s diagnosis, Glassman’s twice as scared. And so, Shaun ventures into the waiting room where Glassman is seated impatiently, waiting to go in for a series of tests. Earlier in the episode, we witnessed Glassman meet with Dr. Blaize. We’re told she was previously suspended due to excessive pot use, and was reinstated as Glassman’s last official act as president. She refuses to let him dictate his own course of treatment, and sends him to undergo the aforementioned tests.

In the waiting room, Glassman’s crumbling up pieces of paper and attempting to make baskets. Shaun grows annoyed, then tears a piece of paper out of his own book and crumbles it up, triggering a breakthrough. He recalls Harry’s struggle to grasp the cup, and comes to a new diagnosis: Harry has kaleidoscopic disintegration, not schizophrenia, which is the result of a brain tumor. It won’t kill him, and removing it has the potential to change him back to who he was before. 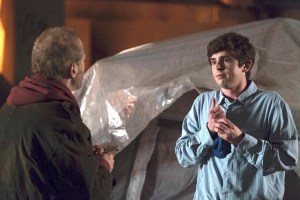 Shaun runs off to find Jared, and the two head out to find Harry before it’s too late. They return to the underpass that is home to much of San Jose’s homeless population, where Shaun is overwhelmed by the various sights and sounds. Jared manages to calm him down enough to find Harry’s tent. They explain to the ailing man that he has a brain tumor, but he doesn’t want to hear it. While he’s distracted, Shaun goes into the man’s tent and finds his California state ID, which reveals his real name isn’t even Harry — it’s Edward Austin Thomas. Hearing his real name said aloud quiets him long enough for Shaun to convince him to return to the hospital. “I have a neurological condition,” Shaun says. “I will always have it. You have a neurological condition, too, but yours can be cured. You just need some surgery, then you can be Edward Austin Thomas again.”

Back at the hospital, Andrews confronts Jared for once again disobeying orders. This time Jared talks back, explaining that Shaun came up with the game-changing diagnosis, and it was Shaun’s ability to connect with Edward that convinced the patient to return to St. Bonaventure. “Whether or not he’s right, I couldn’t be prouder to back him, because he sticks to his gut and fights for what’s right,” Jared says. A scan ultimately confirms Shaun’s diagnosis, and the tumor is removed. When Harry wakes up, he’s back to his old self. His estranged wife and daughter are there to greet him.

Afterwards, Jared and Shaun share one last moment as colleagues. Jared tells his former resident that he meant every word of what he said to Andrews, and Shaun thanks him before walking away. Later that night, Claire says goodbye to Jared, confiding that she regrets how their relationship ended. She wants him to stay in San Jose, but he can’t. “It’s hard saying goodbye, but it doesn’t mean it’s a mistake,” he says. “It’s going to be OK. I will be OK. I think one day, we’re both going to be very happy.” He gives her a kiss on the head, then leaves.

The other Case of the Week keeps Melendez and his team plenty busy. After their evaluations, Claire, Morgan and Park meet with Melendez in an office we haven’t seen before, and it’s quite similar to the set-up Dr. House and his diagnostic team had once upon a time. Their patient is Melanie Arnett, who is admitted with pulmonary hypertension. In other words, her heart is failing due to the extra strain. The solution is a procedure known as a piggyback transplant, which leaves the patient’s heart in place while inserting a second heart to do some of the work. Melanie’s son, Elliot, is nervous about the surgery, but Melanie assures him that Melendez is the hospital’s best surgeon, at least according to Andrews, who’s spent half the morning raving to the press. Surprised, Melendez confronts Andrews, who explains that attention from the press is vital, not only to establish his presidency, but to get the funding needed to establish a one-of-a-kind surgical unit, to be headed by his eventual successor as head of surgery. 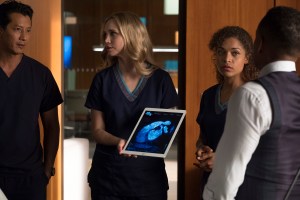 Claire, Morgan and Park take Melanie for an MRI, which reveals an aortic aneurysm that would prevent them from moving forward with the transplant. Claire, however, comes up with a fix: They can proceed with the surgery if they cut out the entire aneurysm segment and implant a teflon graft. Andrews is pleased, but Melendez remains skeptical. Because they’re dealing with two hearts instead of one, there’s still a 20 percent chance the procedure will prove fatal. Andrews then asks who came up with the idea. Claire says it was a joint effort, but Morgan insists it was all Claire. This in turn makes Morgan look like a team player, and Claire look like she’s once again unable to assert herself.

Later, Allegra approaches Andrews about the case. Rather than give up, she suggests he ask himself what Glassman would do. And so, he pays Melendez a visit and gives him a confidence boost, telling him he’s a good enough surgeon to make it work. After some time to think it over, Melendez and his team move forward with the procedure, during which they face unforeseen complications. The aortic wall is too thin, requiring them to instead build an entirely new teflon aorta. It’s an even bigger risk, but it pays off, and the transplant is a success. When Melendez asks who wants to close, Claire finally asserts herself, insisting it was her idea to insert the graft and she should be the one to finish up the procedure. Afterwards, Andrews holds a press conference, where he promises to build on Glassman’s legacy and take St. Bonaventure to the forefront of the medical profession.

As the episode nears its end, Shaun finds Glassman sitting by himself. He joins his mentor, and makes clear that he wants to be there for him every step of the way. He then returns home to find Lea waiting for him outside his door. “Aren’t you going to say hello?” she asks. “Hello,” he says.

What did you think of The Good Doctor Season 2, Episode 1? Weigh in via the following poll, then share your full reactions in the comments!