NBC’s Manifest touched down on Monday night, following a 777-sized summer promotion onslaught and marking the Peacock network’s latest stab at a mythology-laden sci-fi series. Will you book a return flight? 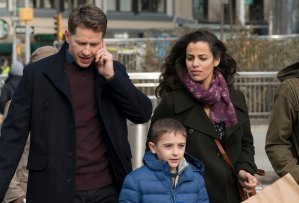 Josh Dallas (Once Upon a Time) and Melissa Roxburgh (Valor) headline the series as Ben and Michaela Stone, a brother and sister whose flight from Jamaica to New York lands relatively smoothly… save for the fact that it is five-and-a-half years into the future!

Following an oddly brief amount of questioning by rightly flummoxed federal agents, the siblings reunite with their family — though Ben’s daughter, Olive, now towers over her twin, Cal (who was also aboard the mysterious Flight 828), and the family matriarch has since passed away. And while Michaela is jarred to learn that her would-be fiance, Jared, is now married to her BFF (“She always said I was lucky to have you!”), Ben and wife Grace get the good news that Cal, who before the flight home had maybe six months to live, now might have his leukemia cured by a procedure that was developed during his “absence.”

What’s more, said medical breakthrough was the handiwork of fellow MA828 passenger Saanvi, who had saved her theoretical work to the “cloud” just as the plan encountered its mysterious, lives-changing, mid-flight turbulence.

Now home in New York, Michaela is spooked by an internal voice — her own — which issues cryptic commands (“SLOW DOWN!” “SET THEM FREE!”) that ultimately help her solve the child abduction case that has vexed NYPD colleague Jared.

Ben, too, is hearing things. The premiere closes with him, Michaela and other passengers congregating outside the hangar where their plane is about to be very carefully examined and analyzed… before it suddenly explodes into a ball of fire.