The Fall TV season began in earnest on Monday night, with the arrival of two anticipated freshmen series, including CBS’ reboot of Magnum P.I. Are you ready to make Thomas and Friends a part of your ohana? 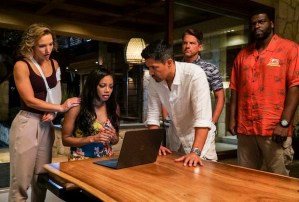 Jay Hernandez (Suicide Squad) leads this update of the 1980s Tom Selleck series as the titular Thomas Magnum, a private investigator who welcomes the occasional assist from fellow POW survivors Rick and “TC,” and who lives gratis within the lush Hawaiian estate of (unseen) adventure novelist Robin Masters.

The new series kicks off with Magnum investigating the murder of his team’s fourth member, Sebastian Nuzzo, and it’s a power keg of a case that instantly claims one of Robin Masters’ prized Ferraris.

As Magnum closes in on the suspected killers, he also gets an atypical offer of assistance from Juliet Higgins, the disavowed but highly capable MI:6 agent who serves as the “majordomo” of Masters’ estate (with the help of Dobermans Zeus and Apollo) . Magnum eventually gleans that Nuzzo, a marine salvage expert, had been hired by the killers to track down a cache of stolen Iraqi gold that now lays at the bottom of the ocean six miles off the coast.

The premiere climaxes with Magnum (in a second, ill-fated Ferrari!) speeding after the corrupt Marines on a narrow, winding road, and then skidding in front of their vehicle to take a shot at the driver. As the baddies’ truck is forced off a cliff, Thomas leaps out of the tumbling Ferrari to safety by grabbing onto the skid of a ‘copter being piloted by TC.