ABC reopened its ballroom doors on Monday for Dancing With the Stars‘ 27th season, and the two-hour premiere featured some staples of the series: Tearjerking backstories! Len Goodman dashing the contestants’ hopes! Bruno Tonioli being a grade-A creep!

Of course, DWTS is also one of TV’s least cynical series, so Monday’s broadcast mostly featured amateur dancers simply trying their best not to face-plant in front of millions of people. And no one did! The season is already off to a solid start.

The competition series will air two episodes this week, with the first elimination already slated for Tuesday night. Which pairs made an impression during the premiere, for better or for worse? Let’s recap the highlights and lowlights of Monday’s broadcast:

BEST OF THE NIGHT
DeMarcus Ware and pro Lindsay Arnold (Cha-Cha) — I’ll admit I’m a little biased here, seeing as DeMarcus and Lindsay are my predicted winners for Season 27. But their cha-cha was also immensely fun, and the pro footballer proved early on that he can handle the acrobatic tricks that Lindsay is fond of including in her routines. If DeMarcus’ movements get more fluid as the weeks go on, he and Lindsay could certainly be sticking around the ballroom for a while. Judges’ Score: 23/30

BEST OF THE NIGHT (RUNNER-UP)
Juan Pablo Di Pace and pro Cheryl Burke (Salsa) — Ignoring Len Goodman’s incredibly strange comment that Juan Pablo is “a hunk with the junk in the trunk” — even typing it gives me the heebie-jeebies! — the Fuller House actor delivered the sexiest performance of the broadcast, without question. Like most contestants in Week One, Juan Pablo has a little fine-tuning to do. But his chemistry with Cheryl was immediately captivating, and his comfort level with tricky choreography will only get more impressive as the weeks go on. Judges’ Score: 22/30

MOST MANIC
Bobby Bones and pro Sharna Burgess (Jive) — Radio personality/American Idol mentor Bones was moving so quickly around the dance floor, I’m amazed we didn’t see Road Runner-esque dust clouds forming around his feet. To be fair, Bones’ enthusiasm made his performance instantly memorable, which is a serious challenge when you’re up against 12 other couples. But his excitement gave way to movements that were distractingly herky-jerky at times, which brought the routine from fun to frightening. Judges’ Score: 20/30 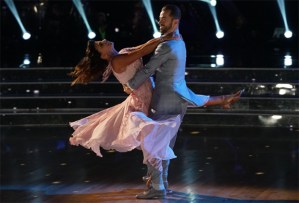 MOST AWE-INSPIRING
Danelle Umstead and pro Artem Chigvintsev (Foxtrot, pictured right) — It’s hard to properly critique Danelle, who is the series’ first-ever visually impaired contestant. How do you knock points off her score when it’s a big deal just for her to dance down the stairs? Fortunately, the judges didn’t have much to criticize on Monday’s premiere, as Danelle — regardless of her blindness — turned in one of the night’s smoothest and most technically proficient performances, even if it was lacking in intricacy. But please, someone, anyone: Gently remind Bruno Tonioli that Danelle is fully blind and cannot see the body parts he’s pointing to during his critiques. Judges’ Score: 18/30

WORST OF THE NIGHT
Joe “Grocery Store Joe” Amabile and pro Jenna Johnson (Quickstep) — Oof. Oof. I will cop to being a regular Bachelorette/Bachelor in Paradise viewer (we all have our vices, people!), and I adore Grocery Store Joe. But this was not good. On one hand, the reality-TV star — who is adorably awkward even when he’s not on the dance floor — was saddled with a highly difficult style right off the bat, so we can only fault him so much for that performance. But man, I was actually watching through my fingers during that disastrously out-of-sync middle section. Bachelor Nation, I suspect Joe needs you now more than ever. Judges’ Score: 14/30

With that, I hand it over to you. Which Dancing amateurs impressed you on Night 1? Tell us in the comments below!