This review comes with a letter grade attached, but there’s a caveat: A show like Manifest really can only be graded an “incomplete.” NBC’s shiny new drama — debuting on Monday, Sept. 24 at 10/9c — has an undeniably cool sci-fi premise… but we’ve been burned by those before, haven’t we? The Event, FlashForward… ever since Lost, TV’s batting average with high-concept dramas like this has been pretty dismal. Since NBC only sent out the pilot episode for review, we have no way of knowing if this show will actually fulfill its early promise — but the first hour didn’t grab me hard enough that I want to stick around to find out. 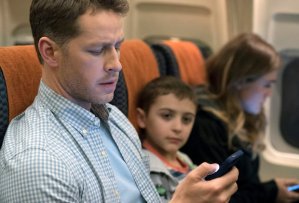 Like Lost, Manifest‘s plot is sparked by ill-fated air travel, when Ben (Once Upon a Time‘s Josh Dallas), his cop sister Michaela (Melissa Roxburgh) and his leukemia-stricken son Cal (Jack Messina) decide to take a later flight home after a family trip to Jamaica. They hit a brutal patch of turbulence, but it soon passes, and the plane lands safely. Met by a fleet of cop cars and ambulances, the crew and passengers are told that their flight vanished five and a half years ago, and they were all presumed dead… and somehow, none of them have aged a day. (The time-skipping concept is actually a bit reminiscent of USA’s The 4400, if you remember that one.)

The briskly paced premiere crams in a lot of exposition via Michaela’s narration, as we see the aftermath of the flight’s sudden reappearance. The authorities are understandably baffled, while the passengers find that the rest of the world has gone on without them: Ben and Michaela’s mom has died in the five years since, Ben’s daughter has grown up to become a traumatized teen, and Michaela’s boyfriend has found a new love. But there’s a bright side to their mysterious return, too. After being given just six months to live, Cal is now eligible for a recently developed miracle treatment. (“The universe just gave all of us a do-over,” Ben’s wife says.) And then there are the voices that Michaela is suddenly hearing in her head…

That last revelation has me thinking that Manifest will end up becoming a supernatural-tinged procedural, but that’d be a letdown, given the vast potential of the premise. And setting aside the juicy supernatural hook, the human stories here are lacking. It’s all a bit humorless, hampered by groan-worthy dialogue and lots of touchy-feely talk about “second chances.” At times, it seems to be straining for This Is Us-style emotional moments, only to fall well short. It is reassuring to see Robert Zemeckis’ name as an executive producer — he has a knack for humane, sci-fi-infused stories like these — but outside of the catchy premise, his presence isn’t really felt in the premiere. 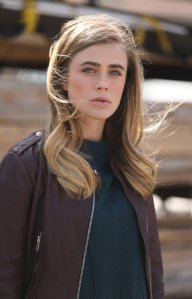 Roxburgh, an alum of Valor and Supernatural, is the standout among the main cast. It’s admittedly hard to buy her as an NYPD detective, but she has some nice emotional moments as Michaela grapples with her new reality. The rest of the cast, though, is mostly unremarkable. (An uncomfortable side note: Roxburgh’s chemistry with Dallas feels more romantic than a brother and sister should.) Plus, the premiere ends on a truly bewildering coda that’s meant to intrigue us, but actually just left me annoyed.

The logistics of Manifest‘s post-event world don’t always compute — would the authorities really just let these people reenter society without an exhaustive investigation? — and the premiere leaves us with lots of dangling questions that we may or may not get answers to. But again, we’ve been down this road before: We’ll probably never get any answers, and even if we do, they’re bound to disappoint. We’re like Charlie Brown, trying over and over again to kick that damn football. Even if you enjoy the Manifest premiere, how can you ever trust it to deliver? Since we can’t skip forward a few years in time to see if it does, better to just leave this flight untaken.