After being bitten in last week’s Fear the Walking Dead, Jim’s fate was sealed. The one thing he could still control, Morgan noted in Sunday’s penultimate Season 4 episode, was how he went out. So did the beermaker’s choice of exit cement Sarah’s opinion that he was “a class-A a–hole… who fills every room with a philosophical fart”? Or did he shuffle off this mortal coil like a hero? Read on and find out. 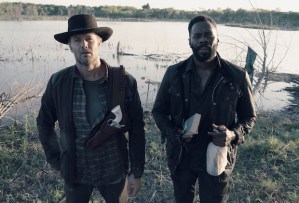 ‘NICE KNOWING YA, JIMBO’ | As “I Lose People… ” began, Morgan, June, Sarah, Wendell, Lucy and Jim remained stuck on the roof of the hospital. Morgan was metaphorically stuck, too: He hadn’t a clue how to get his friends out of the fix into which he’d gotten them — a point that Jim bitterly drove home so often that Sarah cracked, “I see that bite really brought out the best in you.” At least the group would soon get a pick-me-up when Alicia and Charlie walkie-talkie’d from “Alligator Lake” that they’d found John and Strand; they just needed a way to retrieve the men. While Alicia and Charlie were off searching for a boat, John, suspecting that he’d used up his allotment of optimism for this lifetime, quickly lost hope that they’d return. Ironically, it was Strand who kept the faith and raised the sharpshooter’s spirits. He was even saving a bottle of wine to crack open in celebration when they finally got across “these fetid waters.” What made him so sure they would? Just look at who was trying to rescue them, he told John. Charlie murdered Alicia’s brother, and “now they’re out there working together. If that doesn’t make you think anything is possible, I don’t know what else will.” 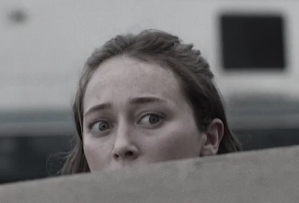 Back on the roof, Morgan stopped Jim from jumping to his death. Or so he at first thought. Jim actually had no intention of turning himself into a walker with broken bones, he merely had climbed up on the ledge to piss on the zombies below. After he shot down Morgan’s request for assistance taking the elevator down to look for Al and get out of the hospital, Sarah rattled off a few of Jim’s less admirable qualities — and his one redeeming one: that beer he made. “That,” she said, “is poetry in a bottle.” And, though she suggested that it could live on long after he was gone, he wasn’t about to give her his recipe. (Class-A a–hole indeed!) Meanwhile, near “Alligator Lake,” Alicia and Charlie’s search for a boat was interrupted by Martha, madly shooting off her gun as well as her mouth. Alicia pointed out that, uh, the Filthy Woman was bleeding and offered to help. But in response, the psycho shrieked, “I don’t need any help” — and proved just how little she needed help by collapsing on the spot. 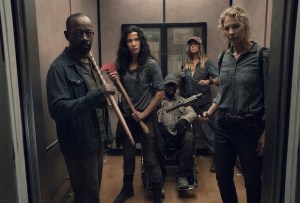 ‘I WASN’T SURE IF I WAS GONNA TALK TO YOU AGAIN’ | Upon making it to the hospital’s generator room, Morgan, June, Lucy, Sarah and Wendell discovered that Al had taken out a bunch of walkers and left a note instructing them to — of course — make copies of her precious tapes. And “if you find that C word, settle her s—,” Sarah read, adding that Al “didn’t use the C word, she went for the full quesadilla.” As Morgan sent June, Sarah, Wendell and Lucy to the ground floor before the generator was kaput, Alicia, having taken the SWAT van from Martha, drove it across “Alligator Lake” to rescue John and Strand. (So wait — that water was like knee-high this whole time?) As expected, the hospital’s exit was lined with walkers. So Morgan was going to create a distraction from up on the roof by dropping a walker onto an SUV and setting off its alarm. (That was some seriously amazing dead-body aim he had!) Still understandably sulky about his imminent demise, Jim refused to help whatsoever. 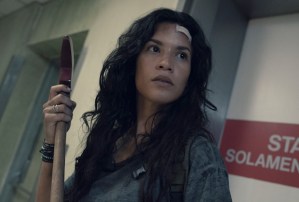 When John wasn’t tying up the walkie-talkie by confessing to June that he’d eaten the Blackjack he’d been saving for her, he learned his girlfriend’s location, and Alicia made a beeline for it. Upon awakening to find herself zip-tied in the SWAT van, Martha was predictably livid. But “I’d say we were pretty cordial,” John suggested, “considering what you did to our friends.” The Filthy Woman had Morgan to thank for that, Alicia added. “He’ll be thanking me,” Martha replied cryptically. “You’ll see.” Back at the hospital, the car alarm attracted enough walkers for June, Sarah, Wendell and Lucy to get out. So now, Morgan should go, June said. He couldn’t, he replied. The elevators no longer worked, and the stairwells were full of walkers. And he was OK with that. “If I know that I got you all outta here, if I got you back on your way to John, maybe that can make up for something.” As June reluctantly left in an ambulance with the other escapees, Jim couldn’t resist poking at Mo-Mo, saying that now he had an easy way out since death is a certainty and “getting out from under the s— you’ve done isn’t.”

‘THIS IS ONE HELL OF A PREDICAMENT’ | Turned out, June & Co. hadn’t really left behind Morgan, even reluctantly. They’d just gone off and found a fire truck to bring back with them. “You told me to help people,” Alicia reminded him. “That’s what I’m doing.” One by one, everybody said something nice to Morgan… except for Martha, whose crazy talk would’ve inspired me to double-tie her. Unfortunately, the fire truck’s ladder was two stories short of the roof. So Morgan had to rappel down one floor, fight off a walker (that John ultimately shot from way down below) and leap onto the ladder to make it onto the roof of the vehicle. In order to clear a path to the SWAT van, Morgan intended to jump and draw away the walkers. Only then did Jim walkie-talkie from the hospital’s roof that he’d take care of it. Before he leapt, though, he passed along to Sarah his beer recipe (including a whispered instruction that we didn’t get to hear). “There’s love in there, too,” he added, “if you can believe it.” Finally, he threw himself onto another car, setting off its alarm and, essentially, saving Morgan & Co. 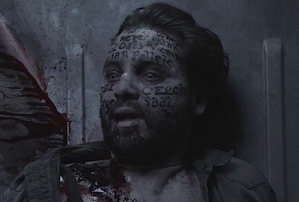 When the survivors reentered the SWAT van, they were surprised to find that Martha had vanished. (Another good reason to have double-tied her!) Nonetheless beating a hasty retreat, the group exhaled for a hot second, then decided that Jim’s beer would need a name that means something. Like “Jimbo’s Beerbos,” Sarah suggested. “Man, he would hate that,” Morgan chuckled as if Sarah didn’t already know. So where were they headed? Recalling that when he first met Jim, he’d told him about Virginia, Morgan suggested that they go there. “He’s not gonna make it, but I think that we can,” he said. “So let’s find Al, and then I say we make our way there… together.” Good luck with that. As the hour drew to a close, Martha wrote Jim’s beer recipe on his face right before he reanimated, told him that he was strong now and said, “Let’s go make [Morgan] strong, too.” So, what did you think of Jim’s heroic ending? Are you hoping Fear will really travel to Alexandria for a crossover with The Walking Dead? Hit the comments.