The episode pit the men of the station against one another for a spot in a hot firefighters calendar (for charity!), cuing workout scenes and slow-mo sequences that put Olivia Newton-John’s “Physical” music video to shame. Buck was sure he had it in the bag, showing off his ludicrous physique in a series of gym selfies, until newcomer Eddie Diaz (actual nickname: Eight-Pack) arrived on the scene. I especially enjoyed watching Eddie thirst-splain to Buck why his choice of lighting was making him look soft.

The rivalry intensified as the hour continued, with Buck and Eddie clashing in the weight room and on the job. And in typical 9-1-1 fashion, the crises were ridiculous — a mechanic who fell on a compressor nozzle and ballooned up like Violet Beauregarde, followed by a man with an unexploded grenade in his leg — but also pivotal, helping Buck and Eddie to realize that the station may be big enough for two 10s. Of course, their whole competition ended up being for naught when Bobby revealed that dark horse Chimney won the spot in the calendar, thanks to a photo submitted by Hen on the sly. 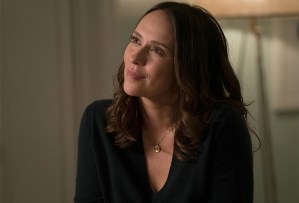 Honestly, even Buck’s reunion with his estranged sister was weirdly sexy. The lovesick firefighter returned home after a long day of saving lives to discover an open bottle of wine and a running shower. With visions of Connie Britton dancing in his head, Buck stripped down and hit the bathroom, but it wasn’t Abby he discovered behind the shower curtain. It was Jennifer Love Hewitt! And she was “Bare Naked!”

After laughing off the uncomfortable encounter, she explained her situation: She finally left her dangerous deadbeat boyfriend, though a harrowing phone call at the end of the hour revealed that he’s not done with her. Maddie also poured her brother a tall glass of truth, telling him that he’s wasting his time waiting around for Abby to come back from her European Eat Pray Love excursion. Buck wasn’t familiar with the “love” part of that story, but she was more than happy to explain it: She’s doing other guys.

Speaking of relationships going south, Bobby and Athena were still hot and heavy at the top of the hour, hooking up on the job when no one was looking. (Buck would be so proud!) But when Bobby told Athena he was ready to take their relationship public, she pumped the brakes hard, explaining that her situation was more complicated than his. “I’m ashamed of us,” she said. “I’m ashamed of you. I’m ashamed of being happy.” But after a talk with her husband — which is another relationship I’m really enjoying — Athena marched into the firehouse and kissed Bobby in front of everyone. She even entered the room by declaring “I hope I’m not interrupting anything!” which is how I assume Angela Bassett enters most rooms.

The episode ended with a tease of the highly publicized earthquake portion of the two night premiere — which I falsely assumed would be a larger portion — with the ground literally crumbling beneath Athena. And on Maddie’s first day as a dispatcher. What are the odds!

* Don’t get me wrong, I’m eternally grateful for the calendar storyline, but why was a 12-year-old girl taking sexy pictures of firefighters?

* I wish I could watch an episode of Claws with Athena. And I agree, Niecy Nash does belong on Mount Rushmore.

* I’m already down with both of the show’s new additions. Jennifer Love Hewitt and Ryan Guzman fit really well into this beautiful world.

While we wait for the second half of the 9-1-1 premiere — airing Monday at 9/8c on Fox — tell us what you thought about Part 1. Grade the episode in our poll below, then drop a comment with your full review.