THE SHOW |  Sorry for Your Loss

THE PERFORMANCE | Playing a grieving widow almost seems like an acting cliché at this point, with the requisite tears and inspirational quotes. But Olsen smashed our expectations in the series premiere of Facebook Watch’s new drama, painting an exquisite portrait of a woman who’s still mourning the loss of her husband after the rest of the world has moved on. It’s a stunning performance that gets under your skin and stays there.

As Olsen’s character Leigh delivered a riveting opening monologue to her grief group, her face was an emotionally numb blank slate, masking her anger and sadness beneath a tough outer shell of sarcastic humor. (Olsen conveys so much with her eyes in this role: still bright, but muted, as if they’re all cried out.) We also saw that Leigh wasn’t always miserable, in flashbacks to happier times with her late husband Matt, as Olsen displayed the ample warmth and affection that’s since been sapped out of Leigh. She finally broke down, her voice trembling, when the one indulgence she still had — the free donuts at her grief group — was taken away from her. (“Nothing makes me feel better enough!”) Later, Leigh frantically searched for a missing Matt in flashback, and her chin quivered with gratitude as her sister offered to help her clean out her old house… it was like a decathlon of acting challenges, and Olsen sailed through them all with ease.

It’s a heartbreaking series to watch, to be sure, but Olsen’s strength and honesty helps keep it from feeling like a drag. Leigh isn’t exactly a cuddly character, and her journey is a messy one, with plenty of false starts and setbacks. The sheer power of Olsen’s performance, though, makes us want to keep following along with her every step of the way.

HONORABLE MENTION | Grief can be a complicated, messy process, and Maya Rudolph was tasked with portraying it in Episode 2 of the Amazon dramedy Forever. The installment picks up roughly one year after — spoiler alert! — her husband Oscar’s untimely death, and June is forced to confront the fact that she’s been zombie-walking through life since Oscar’s passing. Rudolph was marvelous as she showed us every facet of June’s mourning, from a tearful conversation about cable modems to her rant about the pointlessness of religion. And it wasn’t just the monologues where Rudolph impressed us; it was also in the quieter moments of June’s grief, like the triumphant-turned-uncertain look June gave herself in the mirror as she shopped for a business trip. Simply put, Rudolph’s work in this half-hour was to die for. 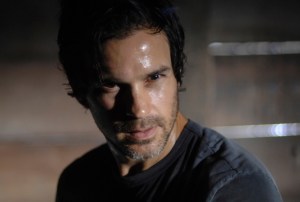 HONORABLE MENTION | It ain’t easy playing crazy. Take it a step too far, and the audience goes from rooting for you to worrying about you. But in the Salvation finale, Santiago Cabrera found jusssst the right balance as Darius emerged from a weeks-long slumber with his marbles a li’l bit loose. “It’s not nonsense, it’s a mystery to be solved!” he bellowed to anyone who would listen as he tried to make sense of his “hummingbird” epiphany, all whilst fending off jolts of residual pain. Once Darius actually laid eyes on a hummingbird, Cabrera’s calmed countenance communicated that Darius’ ideas had crystallized, all leading to him dropping on Harris the season-ending truth about Samson’s erratic trajectory: “Because… it’s not an asteroid.” 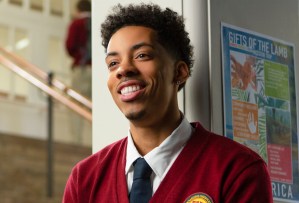 HONORABLE MENTION | Season 2 of Netflix’s American Vandal continued its freshman legacy of mixing silly with the serious. Melvin Gregg also took this approach with his layered portrayal of DeMarcus Tillman, the king of St. Bernardine High. In Episode 3, Gregg charmingly played DeMarcus as the comical, happy-go-lucky basketball star that everyone wants a piece of. Despite being adored by faculty, fans and “friends,” he still feels alone, leading him to make unwise decisions (that are fully revealed later in the season). When asked about his reasons, Gregg tapped into DeMarcus’ vulnerability, admitting his isolation and loneliness. DeMarcus is a young man conflicted between his own wants and the wants of others, and Gregg’s earnestness made both the character and actor standouts in a season of new faces.