Murphy Brown is back… and boy, news and politics have changed just a bit in the last twenty years, haven’t they? 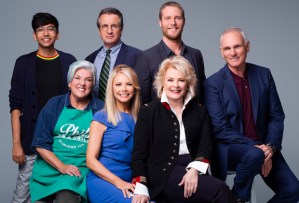 The Emmy-winning sitcom returns to CBS next Thursday (9:30/8:30c) for the first time since leaving the air in 1998, with Candice Bergen reprising her role as the titular TV journalist. In the 13-episode revival, Murphy comes out of retirement to host a new cable news show, Murphy in the Morning, with old pals Frank Fontana (Joe Regalbuto), Corky Sherwood (Faith Ford) and Miles Silverberg (Grant Shaud) in tow. Plus, her son Avery — who we saw Murphy give birth to, much to Dan Quayle’s chagrin — is all grown up now, played by Limitless alum Jake McDorman, and also a TV journalist… although as the token liberal on the right-wing “Wolf Network.” (Get it?)

That’s a lot to catch up on, so we reached out to series creator Diane English, who returns as the revival’s showrunner, to see what we can expect from the new-look Murphy. Below, English tells TVLine about how she “really hesitated” before agreeing to the revival, why she thinks multi-cam sitcoms are “just funnier” than single-cams, how the new episodes attempt to bring the beleaguered press corps “back to their glory days” and why they hope to avoid overloading on Trump talk — but wouldn’t mind inspiring a late-night tweet storm from the Oval Office.

TVLINE | What made this the right time to bring the show back? I know Warner Bros. approached you first, but did you have to actually write it to see if it still worked?
Yeah, that was their idea. And I thought it was a good one, because I really hesitated. They had been asking for a little while, and people had been watching these revivals and reboots come back and do well, and I think Candice and I both felt like there was a danger in bringing the show back if we couldn’t make it as good as the earlier episodes were. But as the headlines became worse and worse… [Laughs] We started to feel like, there’s such a thing as the right time and place, so Warner Bros. suggested that I write the script, and I did, and then I felt after that like we were good to go. Let’s just jump in and do 13 of these. 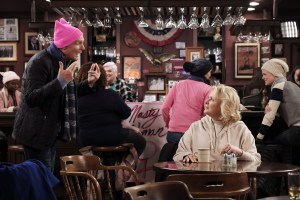 TVLINE | In the twenty years Murphy Brown was away, the style of TV comedy has evolved a lot. Has the show changed at all in rhythm or tone since we last saw it?
Well, it’s a multi-cam show, and just in terms of the tone, it’s pretty much the same. We can be very, very funny, and then kind of switch gears and do a fairly serious scene without it feeling like it’s out of place. I have six of my original writers back, plus some new people, but we all knew how to write the show, so it’s made it a little easier coming back with people who know the voice of the show. There’s been so much single-camera comedy that it really is great to have an audience out there. We do shoot in front of a live audience. It just fuels the performances. I think multi-cam comedies are just funnier than others. [Laughs]

TVLINE | Yeah, I was gonna say, if you were starting this show today, I’d expect it to be a single-camera show. But you’re saying the energy of the live audience helps the comedy.
Yeah, it does. When you think about the multi-camera shows, they’re really the most successful. All of Chuck Lorre’s shows, and Friends, and Cheers, and Frasier… it doesn’t diminish the quality of the writing. I just think when you’re watching a comedy, it’s fun to know that other people are watching. Or a movie, for instance, that I was in a theater watching with a group of people who are all laughing at the same thing… when I see that movie on television again years later, and it’s just me watching it, it doesn’t seem as funny as it was! It’s kind of a shared experience, comedy. It’s part of the appeal of it. 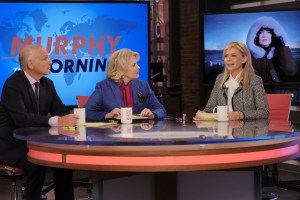 TVLINE | The show within a show isn’t FYI anymore. Is Murphy in the Morning a hard news show, or is there a Kathie Lee and Hoda element to it?
No, it’s definitely not Kathie Lee and Hoda. It’s not even a Today show. There are no cooking segments. [Laughs] It’s the issues. It’s the news of the day. In fact, Murphy does not want to have pundits on. It’s not even Morning Joe, where you sit around basically reading the newspaper out loud for two hours, and have people on just expressing their opinions. She’s just going with the facts, so it’s unique that way.

TVLINE | It goes without saying how much the TV news landscape has changed in the past twenty years…
Oh God… I’ll say.

TVLINE | The original show was made in an era of journalistic integrity and objectivity, and this new era is… not so much.
She’s trying to bring the old era back into the new era. It’s kind of a mission of hers. We do write the show from the perspective of the press. The press was really considered heroic back in the day. Walter Cronkite was the most trusted man in America, and now the press polls lower than the President. It’s all this running around yelling “Fake news!” that makes people distrust the press. Plus, this sort of invasion of false equivalency, and Fox News expressing opinions that are based on nothing, really has diluted the whole impression that people have of the press now. And we’re trying to bring them back to their glory days, because our characters are the press. 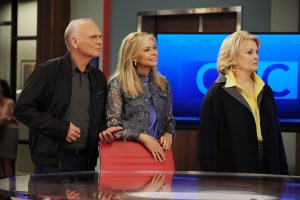 TVLINE | You’ve said you want to make the show as timely as possible. How much time actually passes between filming an episode and airing it?
In the first bunch of episodes, a fairly long period of time. But as we move into the remaining episodes, our post-production time becomes very compressed, so by the time we get to the last episode, the time that will have elapsed from the time we shot the episode to air is about a week. When we come up with an episode idea, it’s an area that we think will pass the test of time. We’re always going to be debating Roe v. Wade, and the role of the press, and climate change… that’s not ever going to go away. But as far as specific incidents, we have really, really smart people in the writers’ room who pay very close attention to what’s going on the world, and there are times when we’ve actually taken a bit of a gamble and predicted something, and we turned out to be right. So it’s going to feel like we just wrote it.

TVLINE | You’ve been through this before with Dan Quayle, but are you prepared to be the subject of a Trump tweet storm?
We’re definitely prepared. We kind of hope it happens. We threw some red meat out there in the first episode, so we’ll see. [Laughs] 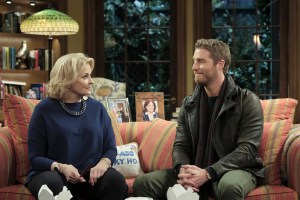 TVLINE | Murphy’s son Avery is all grown up and working for the Wolf Network. How much time do we spend with him there?
He’s the liberal voice on that network, so [in the episode we’re shooting this week,] he’s covering the midterm elections with a sort of Sean Hannity type of guy sitting on the couch with him. So that’s fun. We see his show, where he kind of goes out into the world and talks to real people who have differing opinions on a particular topic. He’s a serious journalist, like his mother.

TVLINE | But he’s also interested in reaching out to conservatives as well?
That’s right. He had the opportunity to hear all sides when he covered the presidential campaign. He went to every state, and he heard a lot of why people felt forgotten or left behind. His mother is a bit in the Beltway, and he got out there with the people. He’s definitely a liberal, but he gets why people voted for Trump.

TVLINE | Are the characters’ personal lives a significant factor here, or are the storylines mostly professional? Do we see them dating, for instance?
You will, from time to time, but that’s not our focus. If we were doing 22 [episodes], we’d maybe do a little more of that. But we have things to say, so… that’s not necessarily the focus. And [Murphy] hasn’t been very successful with that. [Laughs]